Hurricane Harvey is far from over

The storm is unprecedented, and it isn't going anywhere. 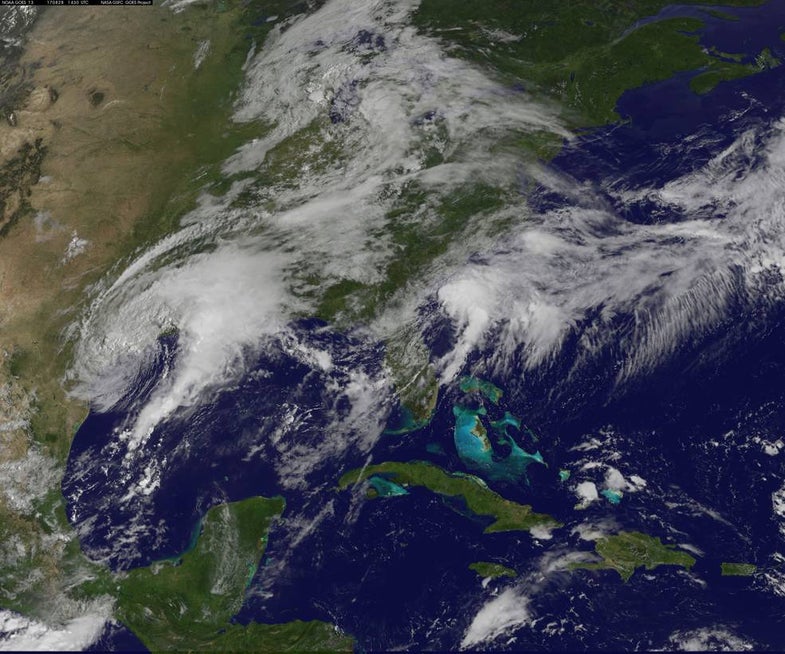 This image of Tropical Storm Harvey was taken on Aug. 28 at 10:30 a.m. EDT as it began moving back into the Gulf of Mexico. NASA/NOAA GOES Project
SHARE

Hurricane Harvey isn’t over yet. Since Friday, when the Category 4 Hurricane touched down on the Texas Gulf Coast, Harvey has dumped almost a year’s worth of rain across the region. So far, at least five people have died in Southeast Texas—and tens of thousands are now homeless. Unfortunately, the latest forecasts suggest that things may get worse. The National Weather Service reported this morning that Harvey is heading back to the Gulf of Mexico, where meteorologists predict it will pick up more power.

Harvey made landfall as a Category 4 Hurricane (a storm with winds of 130 miles per hour or greater), but the National Weather Service has since downgraded it to a tropical storm. That’s because hurricanes, which are fed by water, tend to lose intensity over land. But even as the storm lost power, experts worried that its heavy rains would remain fixed over Southeastern Texas, causing significant flooding.

So far, Harvey has unloaded more than 9 trillion gallons of water. Since Thursday, 44 Texas counties have reported rainfall of at least 20 inches. That represents half a normal year’s worth of rain in under a week, with more precipitation expected in the days to come. Much of that rainfall is not centered on the coast, but further inland. Dayton, for example, which is roughly 40 miles from the coast, has received over 39 inches. So much rain has fallen that the National Weather Service (NWS) has had to update the color charts on their graphics in order to effectively map it.

#Harvey in perspective. So much rain has fallen, we've had to update the color charts on our graphics in order to effectively map it. pic.twitter.com/Su7x2K1uuz

In fact, if Southeast Texas were New England, the area in which 20-30 inches of rain had fallen over the first three days of the storm would encompass all of Massachusetts, Rhode and Island, and Connecticut, according to the National Weather Service. On Sunday, the National Weather Service declared that Harvey is, “unprecedented & all impacts are unknown & beyond anything experienced.” And now that Harvey is returning to the Gulf of Mexico, there’s growing fear that the storm is gearing up for round two.

This event is unprecedented & all impacts are unknown & beyond anything experienced. Follow orders from officials to ensure safety. #Harvey pic.twitter.com/IjpWLey1h8

Harvey’s behavior is unusual in two ways. The first, as you might have guessed, is the sheer volume of water it’s bringing down on the region. Even by tropical storm standards, Harvey is very wet. The other unusual aspect of the storm is the way it’s moving—both the fact that it’s stayed put to drench Texas, and the fact that it is now heading back to the Gulf. This storm progression isn’t totally unprecedented, but it’s uncommon enough to take scientists by surprise.

“The most common type of track for a hurricane is that once it makes landfall, it continues on land and usually goes north,” Suzana Camargo, the Executive Director of the Initiative on Extreme Weather and Climate at Columbia University, told Popular Science.

As the high pressure system pushes a storm over land, the lack of water causes it to lose intensity. As the storm slows down, it melts into what we consider normal weather. It’s important to note that intensity is only a measure of a storm’s wind speed—not moisture—and some of the most damaging storms on record, such as Irene in Vermont or Allison in Houston, were damaging not because of wind but because of moisture.

But Harvey is surrounded by two high pressure systems of equal strength. Those systems are essentially competing in what can only be described as the world’s worst game of tug-o-war. They kept the storm from going anywhere, allowing it to dump loads of water—and misery—on one very large area.

The struggle finally ended earlier this morning. Unfortunately, instead of pushing the storm northward over land, the winning pressure system is pulling Harvey south—back into the Gulf of Mexico—and east, towards Louisiana. The extent to which this will amplify the storm’s destruction will be determined over the next few hours based on how much of the storm is pushed into the Gulf, how warm the water is, humidity, and wind conditions. For now, forecasters predict that the rain will last until Friday, with parts of Texas receiving another 20 inches.

“It’s not that this has never happened before,” says Camargo. “Some storms have very weird tracks, but staying there for such a long time, and going back and forth into the Gulf, is unusual.”

This wasn’t completely unexpected. On Thursday, Louisiana called for a state of emergency—despite the fact that the state was not directly in the storm’s path—because of predictions that Harvey might behave just like this. New Orleans, which flooded earlier this summer when the pumps designed to remove water from the city turned out to be faulty, expects at least 5-10” of rainfall. And then there are the tornadoes.

“When you have a hurricane making landfall, you have rain bands that are very similar to the environment where you have tornadoes,” says Camargo. The storm triggered more than 70 tornado warnings in Houston on Sunday alone.