This mucus packs a punch. 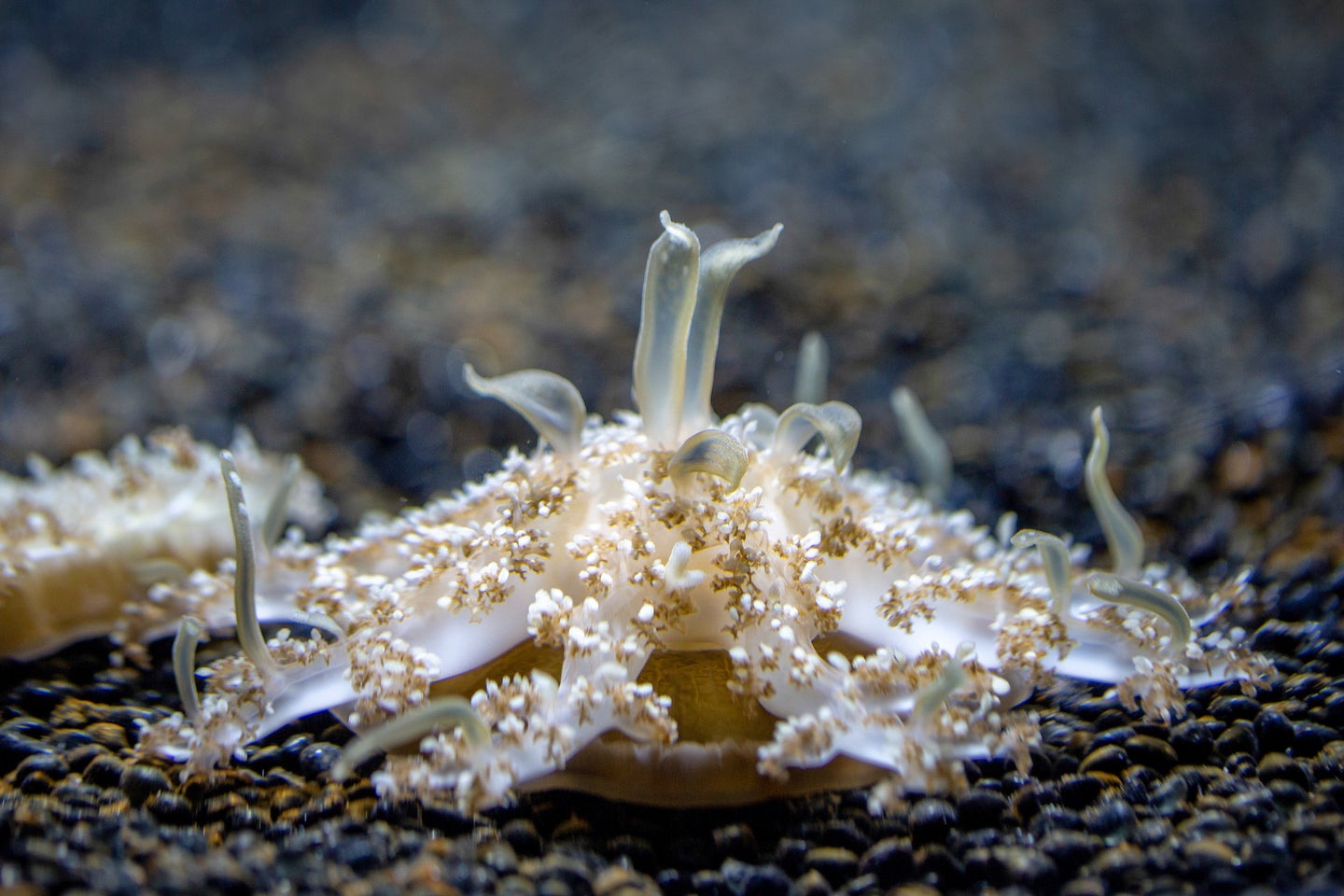 Mucus secreted by a group of jellies, known as upside-down jellyfish, is filled with tiny, wriggling cell masses that allow them to fire stinging substances from a distance.
SHARE

For years, snorkelers in mangrove forests around the Florida Keys, Caribbean, and Micronesia have reported a bizarre and unpleasant phenomenon. Despite being careful not to touch the jellyfish littering the seafloor below, swimmers sometimes feel a stinging sensation that seems to come from the water itself. After encountering stinging water while studying the jellies, scientists sought to get to the bottom of these prickling shores.

To their surprise, they discovered that mucus secreted by these jellyfish is filled with tiny, wriggling cell masses that allow them to fire stinging substances from a distance. The researchers reported the newly identified structures, which they dubbed cassiosomes, on February 13 in the journal Communications Biology.

“It was really one of the most shocking days in my history as a scientist,” says co-author Cheryl Ames, an associate professor of applied marine biology at Tohoku University in Sendai, Japan. “The mucus was really visible when you were down there snorkeling around and diving, but we didn’t know what was in the mucus that was making us feel stingy.”

This group of jellies, known as upside-down jellyfish, is a bit unusual. They don’t drift through the water, capturing prey in their long, trailing tentacles like their cousins. Instead, they lie on the ground and, with the help of stubby arms, they wave about all day in mangrove forests, seagrass beds, and other coastal habitats. Upside-down jellies get some of their nutrients from the symbiotic photosynthetic algae living inside their cells. However, they also feast on brine shrimp, nematodes, and other hapless creatures snared by the clouds of mucus they pump into the surrounding water. “It’s like dropping a ball of saliva while it’s still stuck to your lip and then being able to suck it back in,” Ames says.

The first mention of this floating mucus dates back to 1908 when a zoologist named H.F. Perkins at the University of Vermont saw tiny, mobile organisms in the mucus of upside-down jellyfish that he declared were parasitic larvae. For more than 100 years, their true identity remained a mystery and snorkelers, naval divers, and jellyfish keepers in aquariums were baffled by stinging water. Ames and her colleagues experienced the zinging sensation on the parts of their faces and necks that weren’t covered by protective gear while collecting upside-down jellyfish specimens in the waters off the Florida Keys and Caribbean.

“You get a little sting and you think, ‘okay, I can handle this,’ but it doesn’t go away because you’re in the water,” she says. “It gets to the point where you’re like, ‘I’m out of here,’ especially as the tide is going down and your face gets closer and closer to this humongous bed of upside-down jellyfish.”

She and her team decided to feed captive jellyfish a plankton snack, “liberate” some of the mucus attached to their bodies, and stick it under a microscope. Within the mucus, the researchers spied hundreds to thousands of tiny, gyrating masses propelling themselves about, killing any brine shrimp they bumped into and moved on. “They were passing through like a Roomba…just covering every single bit of that mucus area,” Ames says.

When they examined these cassiosomes under higher magnification, they saw that the structures were popcorn-shaped balls made from an outer layer of nematocytes (the stinging cells typically found on jellyfish tentacles) and thin filaments to push them through the mucus, all surrounding an inner core filled with symbiotic algae. After being plucked from their slimy homes, the cassiosomes survived for 10 days in a petri dish.

The researchers also observed that the cassiosomes were created in spoon-shaped appendages along the frilly arm-like appendages surrounding the jellies’ mouths. The animals would then release them into the water like “potent little grenades.”

It remains to be seen how common this weaponry is among jellyfish. After discovering cassiosomes in the upside-down jellyfish Cassiopea xamachana, Ames and her colleagues also found the structures in four closely related species. A more distant relative, the moon jellyfish, didn’t have any cassiosomes.

Going forward, Ames and her colleagues will continue their search for cassiosomes in other species. By identifying which jellyfish carry these tiny weapons, they hope to alert snorkelers, military divers, and aquarium staff who handle jellyfish so they’ll know when to take extra precautions.

As irritating as stinging water might be, though, it’s all part of a thriving mangrove ecosystem. “If the jellyfish are there, then the water is healthy and it’s a great place to enjoy,” Ames says. “Just show up well-protected.”