Hurricane Harvey is hitting Texas even harder than expected. Here’s what you need to know. 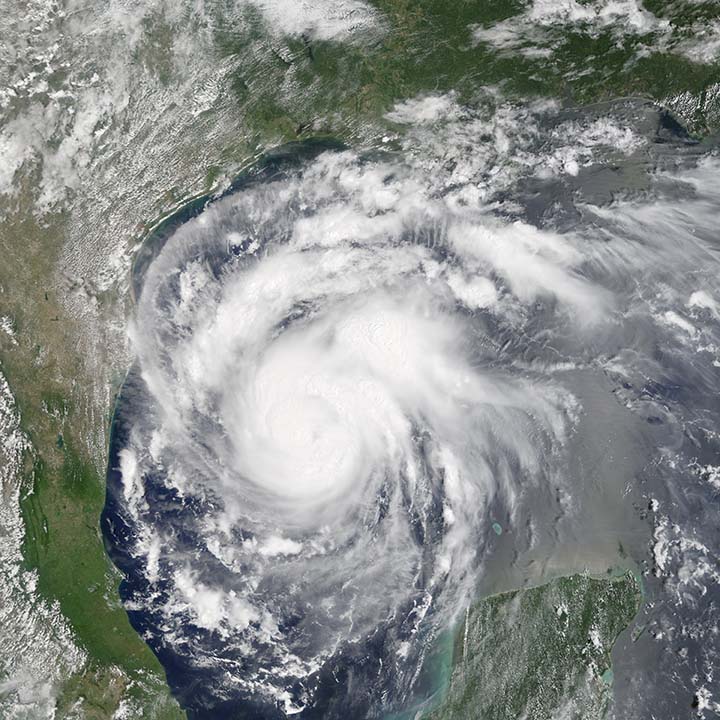 When Hurricane Harvey blows ashore over coastal Texas on Friday, it will likely be the first major hurricane to make landfall in the United States since 2005. The Moderate Resolution Imaging Spectroradiometer (MODIS) on NASA’s Terra satellite captured this natural-color image of the rapidly intensifying storm at 11:24 a.m. Central time (16:45 Universal Time) on August 24, 2017. NASA Earth Observatory
SHARE

Naval Air Station Corpus Christi is closed until further notice. The Navy has ordered the evacuation of all non-essential active-duty military personnel. Texas governor Greg Abbott has declared a state of disaster for at least 30 of the state’s 254 counties, and has reportedly asked the President for a federal disaster declaration. Nearby Louisiana has also declared a state of emergency—just in case. Schools have been preemptively shut down for Monday. On Twitter, users are posting emergency preparedness kits that include battery operated radios, go-bags, and six packs of Shiner Bock, a local brew. If all else fails, there’s always beer.

The upgrade from Category 3 to 4 was made because of data received from NOAA’s specially outfitted Lockheed WP-3D Orion airplanes, better known as the Hurricane Hunters. The planes actually fly into the eye of the hurricane, where they use onboard instruments to transmit measurements of pressure, humidity, temperature, and wind direction to create a more detailed picture of its structure and intensity.

Timelapse of WP-3D Orion #NOAA42 flying a pass through the eye of #HurricaneHarvey from west to east. Advisories at https://t.co/3phpgKMZaS/ pic.twitter.com/b5lyqqkW9x

As of 7 pm EST, the storm was located 40 miles east of Corpus Christi and moving northwest at around 8 mph, according to NOAA. Earlier in the day, NPR reported that strong gusts were already being recorded in the area.

When Harvey lands sometime on Friday evening, it will be the first major hurricane on American soil since 2005 (only Category 3 and above are considered major hurricanes). That year hurricanes Katrina, Rita, Dennis, and Wilma walloped the nation, killing more than 4,000 people and causing nearly $160 billion dollars in damage.

To count as a hurricane, a tropical cyclone must have sustained winds of at least 74 miles per hour. A Category 3 hurricane like Harvey was previously predicted to be, has sustained winds of 111-129 miles per hour, according to the National Oceanic and Atmospheric Administration (NOAA) National Hurricane Center. At wind speeds that high, the roof of even a well built frame home be ripped from the underlying building. Trees will be snapped and uprooted. Electricity and water can become unavailable for days to weeks after the storm passes. A Category 4 hurricane includes wind speeds of between 130-156 miles per hour; though currently Harvey is at the lower edge of a Category 4. A Category 4 hurricane includes all of the risks associated with a Category 3. In addition, mobile homes will likely be destroyed, and residents who do not evacuate should expect widespread communication outages. Most of the area will be uninhabitable for weeks or months.

Hurricane Harvey was expected to slam into Corpus Christi, a city of 350,000 right on the coast of the Gulf of Mexico, though it now seems possible the city won’t be hit with the full force of the storm. Harvey will also hit Houston, which is Texas’s largest city with a population of 2.3 million. Both cities are heavily invested in oil refining. In fact, Houston is home to the nation’s largest refining and petrochemical complex; the home of billions of gallons of dangerous chemicals.

In 2016, Pete Olson—a Republican congressman from the Houston suburb of Sugar Land—told ProPublica that, “If a storm hits the region in the right spot, ‘it’s going to kill America’s economy.'” In addition to being incredibly difficult to clean up (one of many factors that stymied relief efforts in New Orleans post Hurricane Katrina) a well placed storm would shut down the region’s refineries and shipping channels, sending the price of gas soaring.

In 2008, the Category 2 storm Hurricane Ike caused $30 billion dollars in damage and killed 74 people in Texas. Houston was hit hard, but it was spared the worst. The storm was supposed to be a direct strike on the city, but shifted course 50 miles offshore. The storm was still the third worst on record after Hurricane Katrina and Superstorm Sandy. In terms of Houston’s ability to protect its infrastructure from the storm, not much has changed in the year since ProPublica published their story.

And if the refineries leak it will further complicate rescue efforts. Since the chemicals are toxic, even more so when comingled, workers can’t be sent in unless they know the area is safe. As Steven Drielak who served as a Director with the EPA’s National Counter Terrorism Evidence Response Team during Katrina, told Popular Science earlier this year, “You need to picture hundreds of gasoline stations, and hundreds of chemical storage facilities all flooding out. The water enters, picks up all of these chemicals, mixes it into a huge toxic soup, and then flows through the city streets. Once the water recedes it all soaks into the ground. Now you’ve got this toxic material in the ground and you don’t know whether it’s safe or not.”

#Harvey is just a monster on satellite. We have an easy time forgetting the power of Major Hurricanes. This is one not to take lightly. pic.twitter.com/ITPRRDp3R7

But while the wind damage of a hurricane can be horrifying, inland flooding is actually a bigger threat. In 2011, it was water that made Irene (which made land as a minor Category 1 hurricane) so devastating. As Irene lingered over the state of Vermont, it dropped more than 11 inches of rain. Rivers overflowed, the state’s famous covered bridges collapses, and their debris went barreling down water ways. It was the sixth most expensive hurricane on record.

And in Texas, it’s water that has meteorologists, lawmakers, and residents especially concerned. Scientists predict storm surges—sea level rises due to a combination of low atmospheric pressure, high winds, and high waves—of up to 12 feet. Storm surges can be made even worse by coastal erosion, or the sinking of coastal areas, and by rising sea levels associated with human caused climate change. Residents on the coast are advised to evacuate inland, and their window to do so is closing.

Beyond the storm surge, Texas residents are also dealing with the fact that Harvey plans to malinger. After hitting Corpus Christi, the storm seems set to remain over the state until Wednesday. Along the way it will drop 15 to 25 inches of rain, with some isolated pockets receiving as much as 35 inches. June, Houston’s wettest month, normally sees around 6 inches of rain.

Already, Harvey is drawing comparisons with Tropical Storm Allison, which hit Houston back in 2001. With winds at a mere 60 miles per hour, Allison barely moved the indicator on the anemometer. But in Harris County (where Houston is located) she left between 10 to 30 inches of rain over the course of four days. The ensuing flooding killed 22 people, left another 30,000 homeless, and caused $5 billion dollars in property damage. The devastation was so great that Allison bore the dubious distinction of being the first storm to have its name retired without ever becoming a hurricane.

In May, NOAA predicted a 45 percent chance that the 2017 Atlantic Hurricane season—which runs from June 1 through November 30—would be more active than normal. They predicted that there would be a 70 percent likelihood of 11 to 17 names storms (containing winds of 39 mph or higher) 5 to 9 of which could become hurricanes. Harvey is the eighth named storm this year, and the third hurricane so far.

The Governor’s website has a list of the mandatory evacuation zones. Earlier today at a press conference, Patrick Rios, the Mayor pro tem of the City of Rockport—a city in the mandatory evacuation zone—told residents who are staying to write their names and Social Security numbers on their arms with permanent marker, according to ABC News. It’s a surprisingly common piece of advice among disaster preparedness experts, who often also suggest writing down a phone number of a close relation who has either evacuated or is not in the evacuation zone. Once the storm clears, both assist rescue workers in identifying bodies.

If you have chosen to remain in an evacuation zone, please take care. You can read our preparedness tips here.