Why climb down the world’s tallest trees when you can take the gravity elevator? 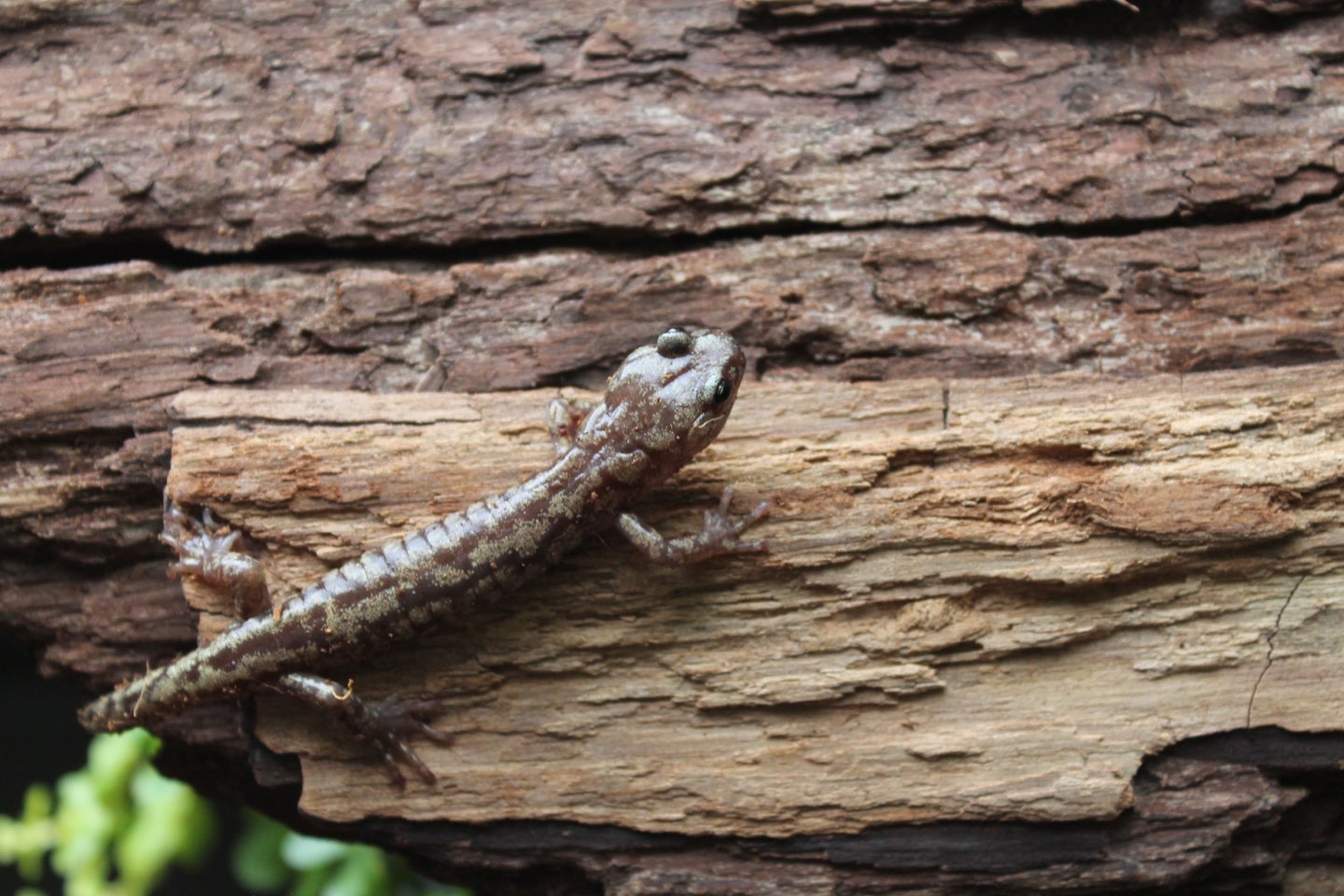 The wandering salamander, Aneides vagrans, is quite the aerial acrobat. Christian Brown
SHARE

At first glance, the 5-inch-long wandering salamander doesn’t appear particularly suited for a life of aerial acrobatics. The amphibians, which can spend their entire lives in the crowns of California’s redwood trees, don’t have the membranes or skin flaps seen in gliding lizards, frogs, or mammals. But when disturbed, wandering salamanders will launch themselves into the air and drop considerable distances onto the branches below.

These aren’t frantic, uncontrolled plunges, scientists reported on May 23 in Current Biology. When the researchers dropped wandering salamanders, Aneides vagrans, into wind tunnels, the amphibians assumed a position similar to that of human skydivers and used their tails and feet to slow down and guide their descent. This discovery suggests that other tree-dwelling animals may also have hidden gliding abilities, the team concluded.

“The salamander is surprising because it doesn’t look like it should be able to do anything in the air whatsoever,” Jake Socha, a biomechanist at Virginia Tech who studies flying snakes, another group of animals that manage without conspicuous aerodynamic traits. “It seems to be that numerous animals have evolutionarily stumbled upon similar sets of features which involve behaviors that will help them to control their body in the air.”

The canopies of redwood forests are a world unto themselves, says Christian Brown, a doctoral candidate in biology at the University of South Florida and coauthor of the findings. Over hundreds of years, thousands of pounds of debris can build up in the crooks between branches, forming spongy mats that collect water and teem with plants and small animals.

“When you climb up into the tree, if you look down you don’t really see the forest floor—you just see more fern mats arranged below you,” Brown says. “It’s kind of a vertical labyrinth of fern mats.”

Wandering salamanders may leap to escape from predators or to find more promising habitats if food or mates are in short supply. Simply crawling down the trunk of the tree might demand a great deal of time and comes with the risk of drying out or being hunted. “If I take the gravity elevator, I’ll be there in seconds and I don’t have to risk any of these things,” Brown says.

He suspects that most of these jumps take place within the zone of 40 to 80 meters (131 to 262 feet) above the ground. Given how light the salamanders are and the cushy padding of the forest floor, plummeting all the way to earth wouldn’t necessarily be fatal. But even if a salamander survives a misjudged fall, it will likely be cut off from food and mates, might lack the energy to scamper back to shelter, and could be devoured by larger species such as the Pacific giant salamander.

All of these hazards give the amphibians a powerful incentive to develop the ability to maneuver in midair. Brown and his team previously found that wandering salamanders jump a little differently than other species. Tricks such as launching off two feet rather than one likely give the animals more control once airborne, he says.

For the new experiments, Brown and his collaborators took a closer look at how wandering salamanders performed in the air. They also examined three other species that spend varying amounts of time in the trees. The researchers dropped members of all four species into a wind tunnel, which “basically creates an animal that hovers in place and simulates an endless descent,” Brown says.

Unsurprisingly, the wandering salamanders seemed most comfortable with this situation. They positioned themselves like skydivers to reduce their falling speed, a behavior the researchers refer to as parachuting. The salamanders take on a specific body position, “splaying their legs out, getting those big hands and feet out far away from the body, and craning the neck back and pointing the tail up and forming this big U-shape,” Brown says. The team found that about 10 percent of their vertical velocity, or speed, had been shaved off when they used this parachuting posture.

The amphibians also sometimes pumped their tail up and down and moved their limbs to move horizontally. Gliding this way probably helps the animals direct themselves towards fern mats to break their fall.

Brown likens the salamanders’ skills at keeping themselves upright to a person using a paddle to control their kayak.

“What really shocked us was that the animals literally never went upside down or lost control unless they ran into a wall,” he says. “The fact that they did it every single time was really revealing to us.”

[Related: These male spiders fling into the air to escape post-coital cannibalism]

Another closely related species, the arboreal salamander, also was fairly adept at controlling its descent. By contrast, the other two species, which come from the same region but don’t typically venture into trees, frequently flailed about without altering their speed or direction.

The next step is to confirm that the wandering salamanders perform their impressive maneuvers in the wild, Brown says. The researchers have begun investigating how wind and other variables affect the falling amphibians and how well they can navigate in midair.

Wandering salamanders have a few distinct anatomical characteristics that might underlie their aerial abilities. Compared with other tree-climbing salamanders, their bodies are a bit flatter, their feet larger, and their tails bendier. Brown and his team are also running computer simulations to understand how these adaptations influence the way that air flows over the salamanders’ bodies during a jump.