Jumping spiders might be able to sleep—perchance to dream

You might have more in common with this sleepy spiderling than you think. 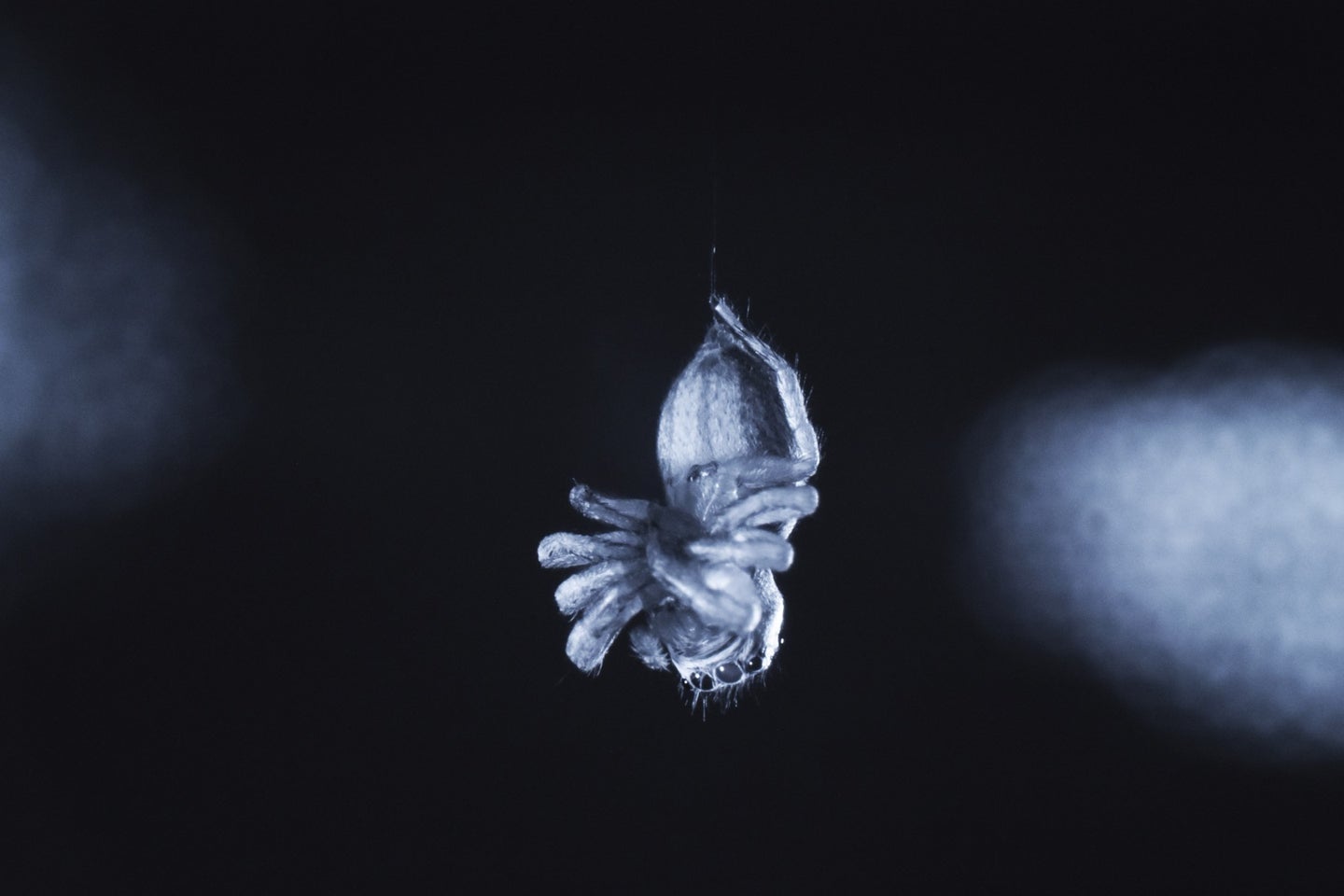 After a long day of hunting down prey or showing off to potential mates, jumping spiders typically slip into their snug silk hammocks for the night. This is how most of these tiny arachnids spend their evenings, but behavioral and evolutionary ecologist Daniela Rößler stumbled across one species with a striking nighttime pose: a jumping spider dangling dormant from a thin strand of silk, with its legs tucked and body slightly curled.

“It never occured to me that they would do anything but sit in their silk retreat at night,” Rößler, who studies jumping spiders at the University of Konstanz in Germany, wrote to PopSci in an email. “Finding them hanging that exposed was really fascinating.”

The vulnerable position gave Rößler a rare, unobstructed glimpse of the creatures during their inactive phase. This week in the journal Proceedings of the National Academy of Sciences, her team released recordings of the species Evarcha arcuata that suggest jumping spiders have an REM sleep-like state.

In their upside-down slumber, the spiders’ bodies would occasionally wiggle or shimmy, with the limbs sometimes curling or unfurling in a good stretch. The sporadic movements are not too dissimilar from your napping pet dog or cat, says Paul Shamble, study coauthor and a former John Harvard Distinguished Science Fellow who studies jumping spider cognition.

“Some of the twitches were really small, some of them were big, which is sort of the same way it is when people sleep,” Shamble says. These particular sleeping behaviors are a trademark of rapid eye movement (REM) sleep, he says, which is associated with brain development and emotional processing in humans—and is most well-known as the stage of sleep for dreaming.

Jumping spiders are highly visual creatures with a set of eight eyes that can even pick up color. And unlike most other land-dwelling arthropods, they have muscles that can control and move their retinae. The team hatched and recorded spiderlings, which have clear exoskeletons right after they hatch, explains Shamble. “You could just see them moving their eyes.”

The researchers then used infrared cameras to record nighttime observations, capturing that “real magical moment” on video, says Shamble. While there have been some rudimentary observations of sleep-like states in scorpions, says Rößler, her group’s findings give a new window into the cognition of arachnids and arthropods.

“I’m thrilled to get to some of the fundamental hypotheses about REM sleep and test those in the jumping spider,” Rößler wrote in her email. “What happens when you deprive them of sleep? Do we see costs in fitness and cognitive ability?”

University of Florida jumping spider expert Lisa Taylor, who was not involved in the research, says she would also be interested in how a bad night’s sleep could affect the spiders’ ability to form memories during the day. “Not to anthropomorphize, but we all know that having a crappy night’s sleep affects your cognitive abilities the next day,” she notes. “For these spiders, learning and memory is really important because they’re predators, and having a bad experience with toxic or dangerous prey is something that they should remember.”

Jumping spiders are able to capture and sift through an incredible amount of sensory information for the size of their brains, which are no larger than a poppy seed. “I think a lot about how they process all that information and how they form memories,” says Taylor. “So in that context, the idea that maybe when they’re in their nests at night, that they’re sleeping and having REM states is just really interesting.”

It’s only natural to wonder if spiders dream, too, says Shamble. “It wouldn’t surprise me if they are dreaming, and I suspect that they are,” he says. “I think it’s a very, very cool and really exciting thing, because it makes you not just think about the animals differently, but it makes you think about dreams in the brain differently.”

That said, Shamble admits that the team is far from scientifically determining if the spiders do dream—let alone sleep, in the way humans do. “Sleep as we tend to think of it, or something more like resting, is determined mostly on a neurobiological and molecular level,” he says. “We don’t have any of that for the jumping spider.”

In the meantime, the researchers have other observational tests they can try to help determine if the jumping spiders are sleeping. For instance, to see how quickly the arachnids react to disturbances, Shamble and Rößler could “wake” them from their sleep-like states with flashing lights and clock their responses. Still, the previously recorded body posture and movements does suggest that the study subjects were in some kind of sleep state. Over the past couple decades, more research has gone into identifying sleep or sleep-like states in species beyond humans and primates. The second has been well-documented in reptiles; and in 2021, biologists recorded octopuses that drifted off into a possible dream phase.

“Applying [the definition of human REM sleep] directly to various non-vertebrate animals can be a rough fit,” David Scheel, a marine biologist from Alaska Pacific University who documented the “sleepy” cephalopods, wrote in an email. “But there are great parallels in sleep across the animal taxas, and this seems like an interesting hint about how sleep evolved and how it may function.”

[Related: Why do people need to sleep?]

While jumping spiders might seem nothing like humans, their behaviors can actually inform us a lot about how we sleep, giving biologists insight into the origins of a trait so seemingly essential to survival. Studying very distant species—from spider to cephalopod to human—can reveal new patterns and connections in evolution, says Rößler.

“While researchers tend to be out there looking for things that have or do not have REM sleep, finding it in spiders hints at the possibility that this sleep phase is actually quite universal, and must have some universal functions as well.” Rößler says that by casting a wider net, “we may be bound to find something similar to REM sleep in tons of other animals, too.”