Tesla is making the Model 3 faster with a software update 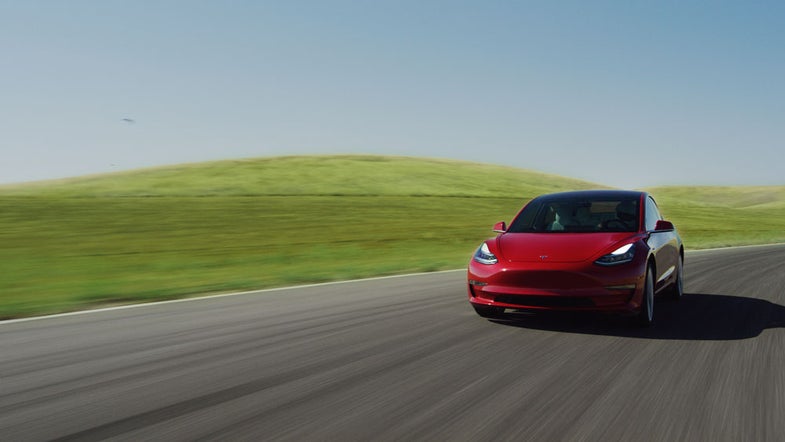 To make a regular car go faster on the track, you can add go-fast components like a turbocharger or better fuel, or improve handling components like brakes and tires. Carmakers can also make a dizzying amount of software tweaks to everything from the stability and traction control systems to throttle mapping and how much fuel gets into the engine.

But with an electric car, the software is the star of the show. Code controls everything. That’s why Tesla can introduce Track Mode to the Model 3 with a software download, unlocking new features designed to get the electric sports sedan around a track faster than before.

On something like the BMW M5, putting the car in Sport Mode adjusts a dizzying array of settings for throttle response, transmission, chassis, steering, stability control, and whether the car operates in all- or rear-wheel drive.

With an electric car like the Model 3, a whole new box of tricks is unleashed. Like Ludicrous Mode did for straight line launches — maximizing everything in Tesla’s arsenal for pure zero-to-60 performance — Track Mode does for autocross and circuit driving.

Among other things, the Model 3 Performance can drive the front and rear motors individually, determining the driver’s intentions and the state of the vehicle, to help control the car’s rotation. If the car needs to turn more, the Model 3 will torque-bias towards the rear. If the car’s rotation is “excessive” — that is, turning too much — it will opt towards front-biased torque.

In other words, it uses the drivetrain to help turn the car. This isn’t new technology, of course. Other carmakers have long used differentials and braking to help move power to different wheels. But an electric car, with separate electric motors, opens up a whole new world of possibilities that we’re only just beginning to examine.

Tesla’s engineers have increased the regenerative braking characteristics of the car as well. Releasing the accelerator will now command maximum regenerative braking — that is, the car will begin charging the batteries as much as it can while slowing the car, as soon as the pedal is lifted. This helps save the brakes (one of the key limitations on a track day), and charges the battery as well.

Speaking of the battery, Tesla also tweaks the temperature of the massive pack of cells under the floor, optimizing it for track day driving. Instead of heating the batteries to near maximum, like it would to maximize straight-line speed with Ludicrous mode, the Model 3 will drop the temperature of the battery and drive unit. This allows room for both the battery and motors to heat up during spirited track driving. The powertrain will also operate beyond normal temperature limits, and will “overclock” the air conditioning compressor to spin faster.

They can’t fit a limited-slip diff to the car, but Tesla’s engineers replicated it by simultaneously applying braking force to one wheel and increased torque from the motor. The net result is similar to that of the limited-slip diff, only using the brakes to get there.

Thinking about electric cars, everything Tesla has done makes perfect sense. But it shows how much potential remains to be unlocked in electric cars. With Porsche getting close to release of its Taycan/Mission E electric car, and specialty performance marques like Koenigsegg rethinking future plans because of the Tesla Roadster, we’ve only scratched the surface of what EV sports cars can do.