When Robots Rule the Roads 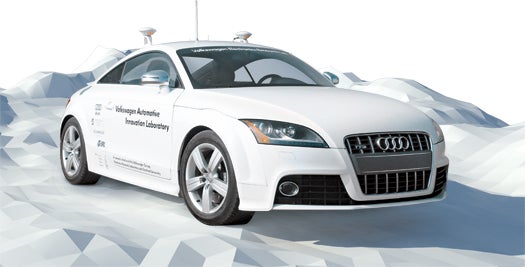 Step One: Prove Robot Cars Can Handle the Worst

This fall, a driverless Audi TTS will attempt to race up Pikes Peak. If a robot can ace this harrowing mountain run, your daily commute could be next

When an Audi TTS roars to the summit of Pikes Peak in Colorado later this year, it will rumble over 12.4 dusty miles, navigating 156 hairpin turns at up to 90 mph, a speed only a pro racer would attempt. Yet Audi won’t have to hire one: The TTS will make the perilous ascent without a human at the wheel.

Audi and its Volkswagen parent, in collaboration with Stanford University and Volkswagen’s Electronics Research Laboratory (ERL) in Silicon Valley, have already birthed some of the world’s most gifted robo-cars. In 2005 a VW Touareg dubbed Stanley became the first fully automated vehicle to negotiate a 132-mile Mojave Desert course and win the Defense Advanced Research Projects Agency’s Grand Challenge. Last year in Manhattan, we twiddled our driving thumbs inside Junior, a robotic VW Passat designed for the urban environment, sensitive to traffic signals and stray pedestrians. The latest offspring of the collaboration is Shelley, a production-based TTS sports car named after rally racer Michèle Mouton, the first woman to win the prestigious Pikes Peak International Hill Climb. Marcial Hernandez, a project manager at ERL, says that VW’s Junior “was about getting you to grandma’s house”—slow, meticulous, safe. Shelley, in contrast, will blast down the back road to grandma’s in a howling blizzard, beating the big bad wolf with time to spare.

The Audi has already carved across the Bonneville Salt Flats in Utah at 135 mph, an unofficial land-speed record for automated cars. Hernandez says that designing a car to drive itself at extreme speeds on slippery dirt roads isn’t a show-off technical exercise. By expanding technology widely available today, cars like the TTS would become your wingman, taking expert control during emergency maneuvers or parking themselves while you grab lunch.

Burkhard Huhnke, the head of ERL, says that many people are just poorly programmed for accident avoidance: They’re panic-prone, unprepared for reflexive action, and unfamiliar with the proper techniques to avoid a crash. Unlike Junior or Stanley, the racy two-seat Shelley doesn’t “see” the road or obstacles using cameras, radar or other sensors.Instead it will navigate Pikes Peak’s harrowing turns using differential GPS, an enhanced system that corrects for atmospheric interference to an accuracy of less than an inch, to heel to a preprogrammed digital map. Meanwhile, algorithms will crunch data from wheel sensors, an accelerometer and gyroscopes to determine the right speed, acceleration and direction to ace the course. 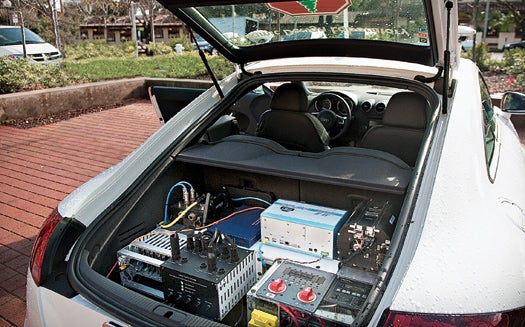 Shelley, the autonomous Audi, is driven by a trunk full of computers.

Today’s cars can already avoid collisions, accelerate, park, and brake on their own. Now automakers and governments are taking the final step, with the construction of networked automobiles that will let robot cars see every pothole, accident and traffic jam long before humans can.

The idea of all-knowing cars might give freewheeling, freedom-loving Americans the willies. But consider the upsides: They could literally change the world. Intelligent Transportation Systems, a government program best known for innovations such as radio-frequency-ID toll collection, believes that one standardized network could dramatically reduce the estimated 37,000 traffic deaths, four billion hours of travel delays and 2.81 billion gallons of wasted fuel in America every year. If the network proceeds as planned, in 2013 the National Highway Transportation Safety Administration may promote consumer adoption by requiring cars to offer a wireless system to earn its coveted five-star safety rating.

The ITS’s magical network, fully realized, will hinge on the valuable 5.9-gigahertz bandwidth set aside by the Federal Communications Commission for short-range communications. This special channel will let cars securely “talk” to each other to cooperate and avoid crashes; trigger airbags and other safety systems before a crash occurs; “platoon” in close quarters on highways to ease congestion, pollution and driver stress; and eventually take over more and more of the actual driving. Connect it all with the GPS, by-wire systems and sensors already in cars, and the result will be machines that broadcast their position, speed, vehicle weight and other critical data at least 10 times per second. In effect, cars will become traveling probes, delivering real-time traffic, weather and accident data even on sparsely traveled roads. “Every car sends out a heartbeat,” says Mike Shulman, a technical leader of Ford’s “active safety” research team. “Collect all that data, and if there’s any conflict, you warn the driver
or take control.”

Naturally, this networked landscape has companies licking their chops over the possibilities for location-specific advertising or high-speed tolling. Security is another issue: If you think hackers are dangerous now, imagine them sending out false messages or otherwise compromising a system that controls swarms of two-ton vehicles. Automakers are devising and testing complex authentication and encryption schemes to make the system as impenetrable as possible.

Privacy looms large as well. The system could potentially be used to track drivers’ whereabouts and enforce traffic laws. Ultimately the government might well argue to ban speeding altogether, with Big Brother controlling cars like pawns on a chessboard. (General Motors’s wireless OnStar system already lets police remotely track and shut down a stolen car.) Yet many drivers might be willing to give up their autonomy in certain situations—for example, if it meant getting to work on time instead of being stuck in traffic. ERL’s Huhnke points out that in a poll, 70 percent of drivers rated their abilities as “above average.” Ten minutes behind the wheel in any city is enough to prove how wrong they are. Who wouldn’t want some of those crazies, lazies and cellphone chatterers to be rendered obsolete, replaced by a hyper-vigilant robo-car programmed to follow the rules and safeguard the life of any human it encounters? 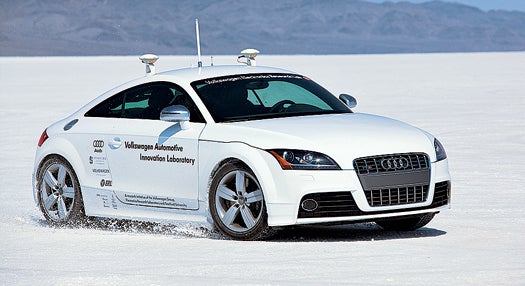