My Wagon Can Beat Your Porsche! 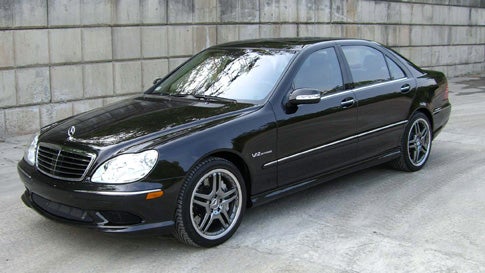 Some of my fellow editors hold the station wagon in special contempt, and it’s true that the basic wagon is sexy like elastic-waistband pants. But I like the wagon because it is a car, not a car pretending to be an after-school bus (i.e., a minivan) or a truck pretending to be a Bradley Fighting Vehicle (any full-size SUV).

But what is Mercedes’s E55 AMG wagon? (AMG is Mercedes’s in-house unit that tricks out basic Benzes with monster engines and other performance equipment. You find souped-up AMGs up and down the company’s model line.) At 14 mpg city on premium gas, the E55 ain’t fuel-efficient, and an 83-grand sticker makes it an exotic that only a few appreciative Americans will probably buy. In short, it’s Superwagon. Outwardly handsome but still basically resembling a big elastic-waistband-pants sort of car, this machine is so muscular, so fast, so comfortable and so practical that it’s like Clark Kent’s own private joke.

The E-class AMG wagon packs a 469-horse 332-cubic-inch supercharged V8 and has brake discs the size of manhole covers. Try 0 to 60 in the sub-five-seconds zone and 70-to-0 braking sub-175 feet (the latter according to Car and Driver). These are Porsche/’Vette/Ferrari numbers, in a station wagon. They don’t mean much, though, until you feel this grocery-hauler lunge past 60 in second gear, still a good way below the redline, and then slow down under hard braking as if it’s being sucked to a halt by a black hole in the pavement. I did that up and down a backcountry road in North Carolina, laughing, then took it to 130 before remembering to be sensible (an electronic speed governor kicks in at 155, if you happen to live near the salt flats). Cornering on the Conti ZR-18 tires was equally fierce, with assorted electronic stabilizing systems making you feel like a better driver than you are.

The transmission is a five-speed automatic with steering-wheel-mounted manual-shifting buttons. The AMG seats, in â€activeâ€ mode, inflate right or left to bolster your body during cornering-it’s like someone pressing your sides with boxing gloves-and there’s an odd slow-motion back-massage mode as well. The payoff is that over a 13-hour road trip of the sort that wagons were meant for, I was never stiff or uncomfortable. Rear seats split and fold down for massive storage increase. The sound system is adequate but not sensational. Leather, wood and handsome dials adorn the cockpit; controls are logically configured; cruise control is precise; and the data-screen interface is intuitive, although a touchscreen would be nice.
Sure, this car still looks like a wagon because it is a wagon-as interpreted by the AMG engineers on Krypton.

Next Page: Driving the S65 AMG.

The world of high-speed luxury sedans is becoming increasingly crowded. Maserati has its new, V8-powered, 394-horsepower, 170mph Quattroporte, which starts at $101,000. Bentley has its $165,000 Continental Flying Spur, a 12-cylinder, 552hp luxury liner that tops out at 195 mph-if you can handle such velocity. They both have elegant styling and remarkably refined interiors.

Then there’s the $170,000 Mercedes-Benz S65 AMG, which is a much more businesslike and serious high-performance sedan. It shares its shape and basic platform with the production S-Class but is torqued up in every other conceivable way-with a twin-turbo, 604hp V12 engine, 738 pavement-ripping pound-feet of torque, menacing slate-gray 19-inch wheels, and discreet, understated styling that avoids the swoopiness and fussy detailing that plague other luxury rides.

Inside, it’s clear how much latitude AMG has in its creation of uniquely differentiated vehicles-the leather in our test model was an attractive peanut-and-black combination that you’d never find in a regular production Mercedes. Those cars must appeal to much broader array of customers, so they rarely stray from black, gray or tan interiors. The AMG is a car for someone who wants a vehicle with just a hint of edge to it, preferring to keep the lion’s share of its exuberance discreetly hidden under the hood.

On the road, the S65 is a well-controlled demon. You understand how much this car is capable of after a few hours on the road, when you realize how little of the gas pedal’s travel you use during routine driving. Push it all the way to the floor from a standstill, and your stomach feels the rapidly accumulating G-forces. Same thing going uphill. Jam it down while cruising at 65, and your head bobs back as you shoot up to 110 in just a few heartbeats. Then, after you’ve had some time behind the wheel, take a tightly curved exit ramp as fast as you dare, and you’ll know, based on how far down your foot is and how stable the car feels, that it can take it much, much faster. Push a little bit deeper into the footwell, and you might feel the Electronic Stability Program kick in-automatically pulsing the brakes to keep the car on the intended line-as you approach the cornering limits. Body roll? Nonexistent, thanks to the Active Body Control. The car floats through turns as though it has no vertical dimension whatsoever, like a big, flat puck on an air-hockey table.

The S65, like most other Mercedes sedans, is electronically limited to 155 mph. Without that limitation, it would do 200. There are other cars you can buy that will take you and three or four friends to outrageous speeds, but they’re instantly recognizable luxury icons, and most of your money buys that image. The S65 is for drivers who don’t need-or want-to attract that kind of attention and who aren’t as interested in top speed as they are in how well their car manages every speed.