Drivers need to manipulate the controls at 200 mph. 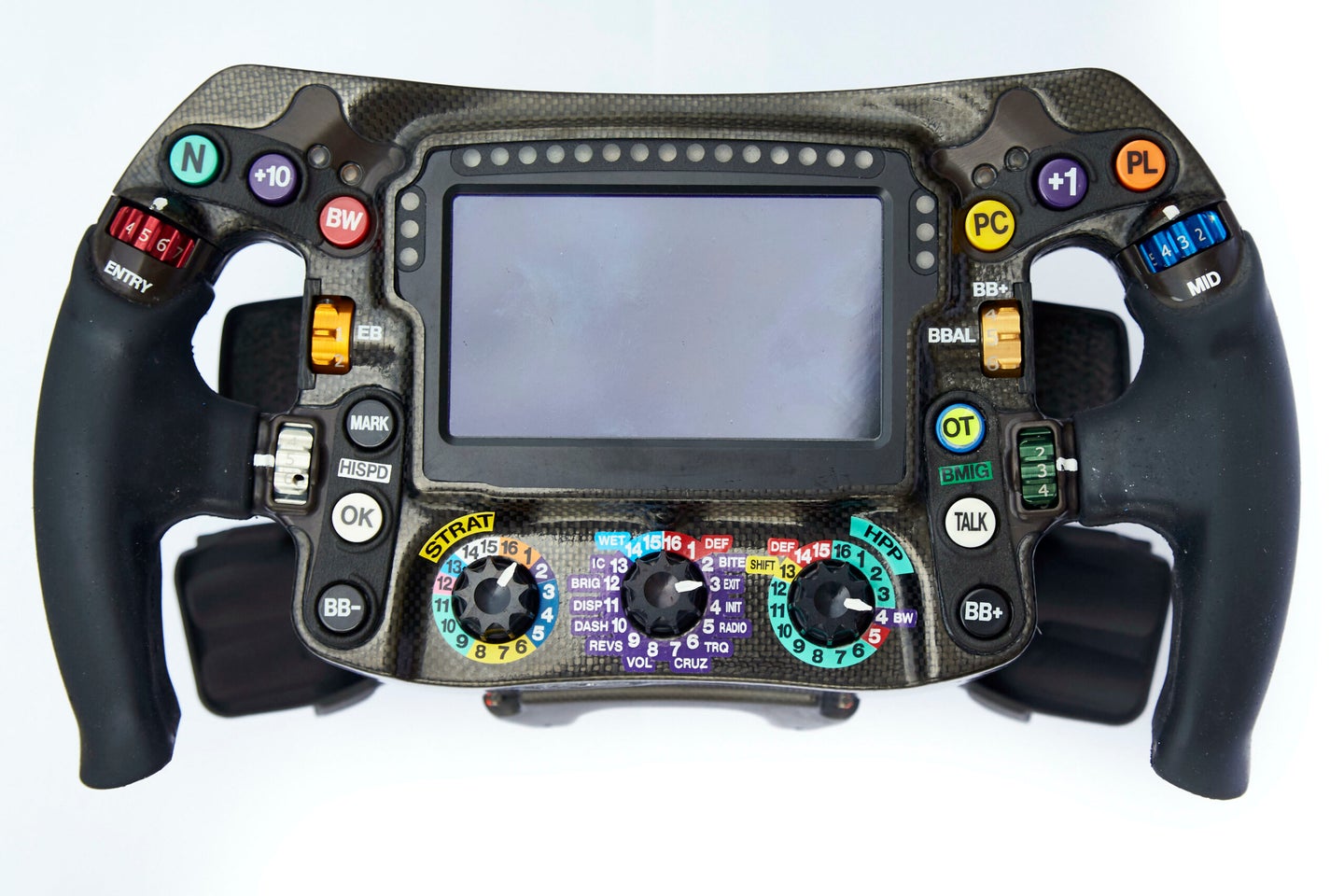 Formula 1 race cars are ground-bound carbon fiber fighter planes. They place tremendous stresses on their drivers as they tear around road racing tracks and temporary street circuits during the course of their annual championship season’s tour of the world.

The cars can top 200 mph in some spots on the track and tax drivers circulatory systems with 6g of cornering force in the high-speed turns when the bodywork is generating maximum grip-enhancing aerodynamic downforce.

As with the pilots in airborne fighter planes, Formula 1 drivers still have to control their vehicle while enduring these stresses, and because they are racing, they need to continuously make adjustments to keep the car running optimally.

Formula 1 teams monitor the cars’ systems remotely and could make adjustments for the driver from computers in the pit lane. But such two-way control of cars is banned, so the drivers have to tweak the myriad systems manually, while in the midst of a battle with one another.

How does a modern @F1 steering wheel work? Let us explain… ? pic.twitter.com/yxK1yvfqVf

On the eve of Sunday’s Australian Grand Prix in Melbourne, the Mercedes-AMG Petronas Motorsport team released some details on its car’s steering wheel for the 2019 season, pointing out the functions of the multitude of buttons and switches.

Formula 1 cars’ steering wheels are removable. They release from the steering column by squeezing a collar at their base to make it easier for drivers to get into and out of their cramped cockpits.

The wheels, like nearly everything else on the car, are made of carbon fiber to save weight and are stuffed with electronics. “A modern Formula 1 car is a pretty complex bit of machinery,” noted Evan Short, team leader, trackside electronic systems for Mercedes-AMG Petronas Motorsport team in the video posted to the team’s Twitter.

“We ask the drivers to operate in two modes,” he continued. “We want the intuitive creatures who interact with the car the way they might have done with a go-kart when they were kids. We also want them to understand the complex bit of electronics and systems that it takes an engineer to understand.”

Those wheels are built tough to withstand their harsh operating environment. “The wheel is designed around switches which are quite robust that are used in aircraft as well,” Short Explained.

“Robust against accidental actions under vibration; you imagine of course the driver using that wheel under a high-vibration environment while wearing gloves. They are designed around first-order retrievability. That’s the idea that the driver can get to anything he needs while keeping his hands on the wheel and reaching with his thumbs.”

It is hard enough to navigate through multiple menu layers in our street cars’ infotainment systems while commuting without trying to do that during a race. The team builds three steering wheels for each of the two drivers; a primary wheel, a back-up in case of a problem with the primary and an experimental wheel for testing new features the team might plan to add to the car later in the season.

Looking at the switches that are on the Mercedes-AMG wheel (which is typical of others’ though each team has its own unique design and switch placement), one of the most important is the “Strat” dial, which refers to the engine management strategy employed.

The team can ask the driver to change that, adjusting the engine’s stress, power output, fuel consumption and electric energy recovery as needed to improve the chances for a win or to help prolong the engine’s life for future races.

“My favorite is the [expletive deleted] mode,” exclaimed driver Valtteri Bottas, referring to the crew’s colloquial name for the most powerful setting. “That means all the power from the engine,” he said. “Depending on the situation we have many different modes. Either defending against another car, attacking, or saving the engine when we can, or having a bit more deployment from the [Motor Generator Unit-Kinetic, the hybrid-electric booster motor] if needed,” he added.

There are three dials that control the differential that doles out power to the rear wheels. It has distinctly different characteristics for corner entry, mid-corner and corner exit, and so each portion has its own switch.

“This is for the ‘Diff Entry,’” Bottas pointed out. “Over here we have the diff for the mid-corner. So when the car is going around the corner, in the middle of the corner, it changes how car balances quite quickly. You can either gain understeer or oversteer adjusting this.”

Remember, the driver makes these changes to address specific corners, and then changes it again for upcoming parts of the track. Every lap.

“If I press ‘Talk’ I can talk to the guys. Have a chat. If I press it again then the line is cut.”

There is a speed limiter button that automatically holds the car at the maximum allowable speed in the pit lane, even when the gas pedal is floored to avoid penalties for accidentally speeding past the crews servicing other drivers’ cars during the race. That’s typically 50 mph or 37 mph depending on the track.

And the big green ‘N’ button has two purposes on the Mercedes-AMG, both shifting the car into Neutral and shifting into Reverse. “We select Neutral when we stop the car, after the session or after the race. If we hold it for long, we get a Reverse gear.”

Other teams have a dedicated ‘R’ button for selecting Reverse, but Bottas has a good explanation for why that function hasn’t earned its own place on the Mercedes-AMG steering wheel. “I think I’ve never used it with the car!” he said. “But you never know. In Monaco or somewhere, you might get stuck and Reverse might be the only way to save you.

The system seems ridiculous to operate under racing conditions, but Bottas insists it isn’t too bad. “It might look complex, but, with practice, I know it by heart,” he concluded.