Where to find self-driving cars on the road right now

Autonomous cars seem futuristic, but they’re already on the streets. 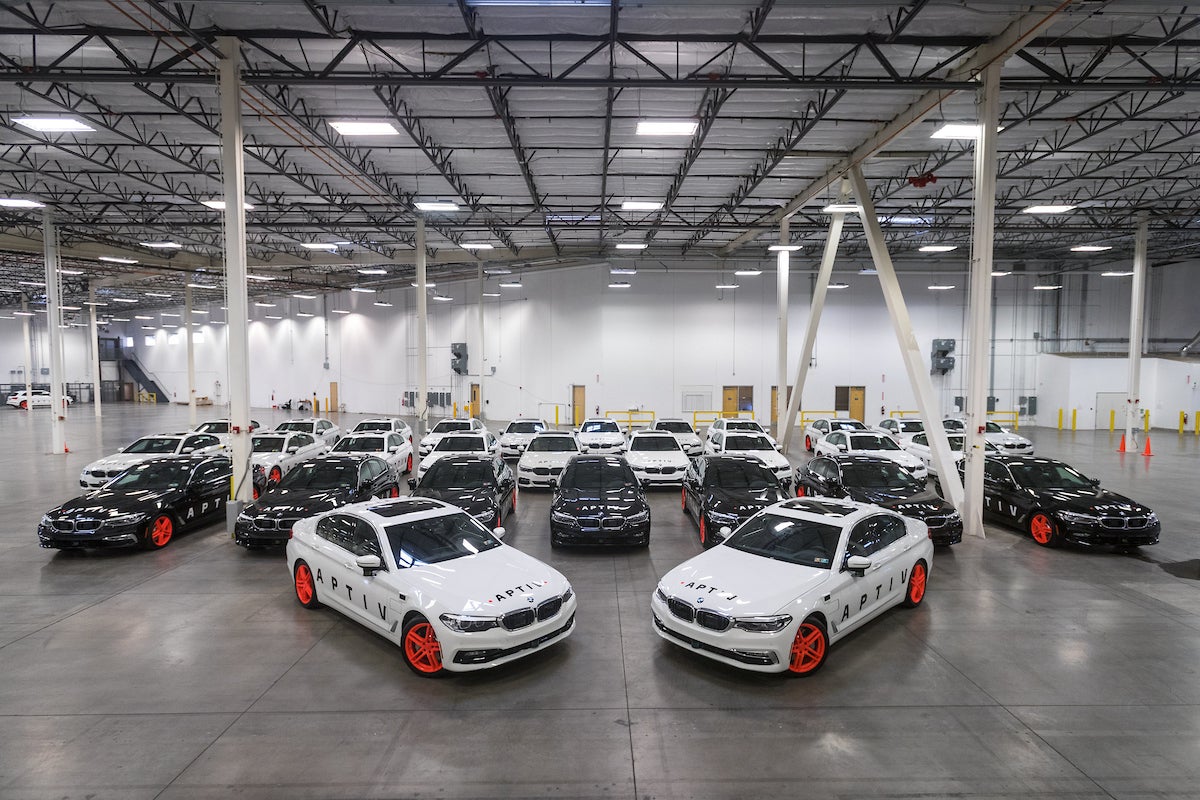 Headlines abound about self-driving cars, but there’s a big difference between reading about them and seeing one, replete with all its sensors, on the street. Or, for that matter, taking a ride in one. Uber is back on the road with its self-driving cars, and plenty of other outfits are making progress and running their cars in states like California, Michigan, and Pennsylvania. Here’s an evolving round-up of what’s going on with self-driving cars on public roads, from Aptiv to Zoox.

The name “Aptiv” might not ring a bell, but if you visit Las Vegas, you could ride in one of their autonomous vehicles after hailing a Lyft. They first began offering rides in their cars during the Consumer Electronics Show in January, 2018, and the program has grown from there. The company currently has 30 autonomous cars on the roads in Sin City; they cruise around 20 hours a day, seven days a week. Aptiv says they’ve completed more than 30,000 Lyft trips and hauled around more than 50,000 passengers, and while the vehicles are autonomous, a real human sits behind the wheel and in the passenger seat, too. Aptiv—which purchased self-driving car company nuTonomy in 2017—also tests their cars in Boston, Pittsburgh, and Singapore.

Like Aptiv, Aurora may not be a familiar name, but Amazon, an investor in the company, obviously is. Aurora announced on February 7 that it had scored more than $530 million in financing from the likes of Sequoia and Amazon; the company is developing its own self-driving technology while working with Volkswagen, Hyundai, and Byton. Their self-driving VW e-Golfs and Lincoln MKZs are on the streets of Palo Alto, San Francisco, and Pittsburgh—with two vehicle operators on board, too.

General Motors has owned autonomous car company Cruise since 2016, and their gen-three autonomous Chevy Bolts are on the roads of San Francisco, Scottsdale, Arizona, and Orion, Michigan. (The Bolt is Chevy’s all-electric vehicle, and not to be confused with their hybrid Volt, which they recently put out to the asphalt pasture.) These self-driving Bolts have safety drivers behind the wheel, and in San Francisco, they’re part of an internal ride-sharing program, called Cruise Anywhere, for over a 1,000 employees who can use hail one to catch a ride. Cruise and General Motors have also made a splash by revealing their generation-four concept vehicle, a Bolt that has no steering wheel or pedals.

Like Aptiv and Aurora, the name Drive.ai may not be familiar, but they’re already offering a self-driving service in two places in Texas: Frisco and Arlington. Both of those towns are in the Dallas, Fort Worth area, and both services use self-driving vans and safety drivers to shuttle people around in a specific, geofenced region. The service in Arlington is the more public of the two—so if you’re visiting Arlington, you could summon a self-driving van, for free, via an app or through a kiosk. The vans even have signs on them to let pedestrians know what they’re doing.

Ford is working with a company called Argo AI for its self-driving cars. The company has autonomous vehicles on the road in Miami, Pittsburgh, Washington, D.C. and Dearborn, Michigan. They’re also licensed to start testing this year in Palo Alto, California. Those cars also have two safety personnel on board—one behind the wheel, and one in the passenger seat.

The automaker has also been working with Dominos, Postmates, and Walmart to explore the intersection of self-driving cars and business deliveries; interestingly, those cars are designed to look like self-driving cars, but actually are just regular vehicles with humans driving them. These fake self-driving tests are so the company can learn about logistics and human-car interactions at the pick-up and drop-off points.

Finally, it is eying a 2021 launch of an autonomous commercial service that would carry people and goods in multiple cities, including Miami and Washington, D.C.

Not all self-driving cars exist to transport humans. An 8-foot-long vehicle from Nuro called the R1 is designed to carry only groceries, but unlike a delivery robot that cruises on sidewalks, this car goes on the roads. In December, they kicked off a pilot program in which the the unmanned electric vehicle can deliver groceries from a Fry’s Food Stores in Scottsdale to humans in the area.

The worst tragedy by far in the world of self-driving cars occurred on March 18, 2018, when an autonomous Uber killed a pedestrian in Tempe, Arizona. While they yanked their vehicles off the road after that disaster, the ride-sharing company’s Advanced Technologies Group returned in December of last year with a much smaller focus: their cars cruise in self-driving mode on a short route in Pittsburgh. Uber says those vehicles only run on weekdays, during the day, and not in bad weather—but that they could expand that domain as time goes on. One crucial change is that the automatic braking system that comes with the Volvos they are using will now be engaged while the vehicle is in autonomous mode—previously that wasn’t the case, according to an NTSB report on the March accident. Finally, Uber is also running their autonomous cars in Toronto and San Francisco in manual mode, meaning a human is driving. That exercise helps the company gather data for mapping and running simulations. Two humans, or “mission specialists,” will be in the cars at all times, according to Uber.

Waymo began as an internal self-driving project from Google, and is now an Alphabet-owned company in its own right. They recently launched an autonomous taxi service in four cities in the Phoenix, Arizona area, which is only open to hundreds of people, according to the company; those people can use an app to summon a self-driving Chrysler Pacifica (which has two Waymo-employed humans up front) and then go somewhere in it, like Uber or Lyft.

Waymo One is an evolution of testing the company had already been doing in the Phoenix area, called the Waymo early rider program. A leader in the autonomous car space, Waymo has racked up more than 10 million miles of running autonomous cars on public roads, and billions of simulated miles, too.

Autonomous vehicle company Zoox is working on creating an innovative kind of car—an electric vehicle designed specifically to be self-driving that can cruise either forwards or backwards (both the front and rear wheels can turn; see an image of prototypes above). But today, in San Francisco, Zoox is testing approximately 24 autonomous Toyota Prius and Highlander vehicles equipped with sensors and Zoox self-driving software. The cars have a safety driver behind the wheel, as well as a software operator onboard, and while they have a permit from the California Public Utilities Commission to pick up passengers, they’re not yet doing so. Eventually—like other companies in this space— their goal is to create an autonomous ride-hailing service in a city, although Zoox intends to use their own custom-made bidirectional vehicles for the fleet.

Finally, others continue to work in the autonomous car industry, from the little to big. A self-driving shuttle began operations on December 10 in Columbus, Ohio, for example. And of course, Tesla produces a semi-autonomous feature for its vehicles, called Autopilot, to assist drivers and even suggest making a lane change.

This article was updated on February 7 to include news about Amazon’s investment in Aurora.