Gas prices are up, fuel economy is downâ€”but the brightest minds in auto technology are about to do something about it 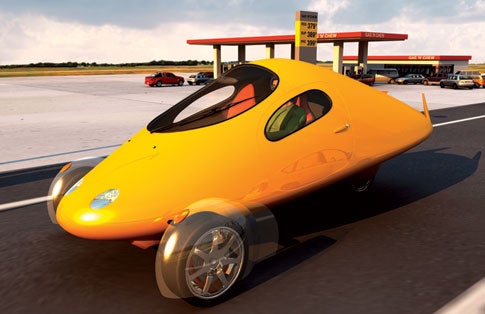 Over the past several decades, the promise of the “car of tomorrow” has remained unfulfilled, while the problems it was supposed to solve have only intensified. The average price of a gallon of gas is higher than at any time since the early 1980s. The Middle East seems more volatile than ever. And even climate skeptics are starting to admit that the carbon we´re pumping into the atmosphere might have disastrous consequences. To these circumstances, automakers have responded with a fleet of cars that averages 21 miles per gallon, about four miles per gallon worse than the Model T.

Yet hope is coming faster than that hydrogen economy you’ve been hearing about. Several small companies are developing new engine technologies and advanced automotive designs that promise to deliver 100 miles from a single gallon of gas. The proposals run from the simple-reduce weight, improve aerodynamics-to the incredible (one company wants to borrow a few tricks from jet engines).

The race should heat up further when the X Prize Foundation-the group that kick-started the space-tourism industry with its $10-million competition to produce a reusable private spacecraft-announces in the next few months a competition for the first car to break 100 miles per gallon and sell a yet-to-be-decided number of units. The prize money hadn’t been finalized at press time, but X Prize officials are discussing figures in the $25-million range as an appropriate incentive. They hope the prize will urge people to completely reconsider what a car should look like and how it should function. “We need a paradigm shift,” says Mark Goodstein, the executive director for the automotive X Prize. “We need to change the way people think about automobiles.”

Here are three technologies that auto-industry insiders we consulted think could raise the bar for automotive fuel economy-and quite possibly secure the X Prize’s huge purse.

By far the most obvious approach to achieving ultra-high mileage is to dramatically cut weight and wind resistance, the chief enemies of highway mileage. This is the gambit you see in student engineering competitions, in which teardrop-shaped microvehicles on bicycle wheels regularly achieve hundreds of miles to the gallon. But these vehicles are all expensive prototypes. The challenge is to make a light, highly aerodynamic vehicle that´s reliable, crash-worthy and, most important, inexpensive to mass-produce.

Steve Fambro may have tinkered his way into the solution. His Aptera, which he designed in his garage in Carlsbad, California, is a three-wheeled, bullet-shaped two-seater that minimizes drag and weighs only 850 pounds (the Toyota Prius weighs 2,890 pounds). He cut bulk by using a carbon composite frame, a race-inspired solution that should help with crash absorption.

Fambro´s company, Accelerated Composites, is drawing the attention of several venture capitalists, and he hopes to have the Aptera on the market in less than two years. “Everything I had been doing was with an eye toward manufacturability,” he says. By using novel composite-construction techniques, includinginexpensive molds and automated fabrication processes, Fambro says he can keep the cost per vehicle under $20,000. And when combined with a hybrid engine that burns diesel, the Aptera could break 300 mpg.

The hybrid drivetrain has been the great success story of the high-mileage movement. Cars like the Prius get up to twice the mileage of the industry average partially by recovering energy that´s lost as heat during braking, storing that energy in a battery, and reusing it later on. Yet today´s most efficient hybrids can recover only 30 percent of that energy for reuse.

One radical solution under development at the Environmental Protection Agency´s Advanced Technology Division is to get rid of the heavy batteries altogether. The EPA has built a modified hybrid that uses a hydraulic system, not a battery, to store braking energy. When you press the brakes, the wheels drive a pump that compresses nitrogen gas, which is inexpensive and inert. When you accelerate again, that compressed gas runs the pump in reverse to help power the vehicle [see illustration, below].

The hydraulic-hybrid system, scheduled to begin testing in two UPS trucks this month, with another to follow next year, promises to return at least 70 percent of the braking energy back to the wheels, which would lead to a 60 to 70 percent jump in fuel economy and a 40 percent reduction in emissions. Perhaps that´s why Charles Gray, the director of the Advanced Technology Division and one of the developers of the hydraulic hybrid, can´t contain his excitement about its potential. “This is going to be the biggest revolution in automotive history,” he declares. “Bigger than the assembly line.”

That’s yet to be seen, of course, but the hydraulic hybrid is also smaller and cheaper than conventional hybrids. “I can hold a 500-horsepower hydraulic pump motor in my hand, and I’m not a big guy,” Gray says. Because the technology would eliminate the need for a transmission-the engine merely pressurizes the hydraulic system, while the hydraulic motors power the wheels-and several other parts, it could be installed in a small car for almost no additional cost. Ford, the U.S. Army and others are investigating the technology, yet UPS-with its fleet of vehicles that constantly suffer through stop-and-go driving-is its only committed customer so far.

**Jet-Engine Inspiration
**
Another potential player in the race to 100 mpg is the StarRotor, which began life as an air conditioner at Texas A&M University. Chemical-engineering professor Mark Holtzapple and his colleague Andrew Rabroker were attempting to build a better compressor for an air conditioner when they hit on the idea that became the StarRotor engine’s basic architecture. Once they made the connection to car engines, “we quickly forgot about air conditioners,” Rabroker says. They have since formed a business (also called StarRotor) to commercialize the technology.

The StarRotor uses the same thermodynamic process as jet engines to recuperate some of the heat normally lost to exhaust, something that the design of a piston engine doesn’t allow. The exhaust heat warms the air that comes into the engine before the fuel is added [see illustration, below]. This hot air leads to more powerful combustion, which means the StarRotor can extract more energy from a given amount of fuel than a conventional engine could.

Based on data from compressor prototypes, Rabroker believes the StarRotor will convert between 45 and 65 percent of the chemical energy in its fuel to mechanical energy, irrespective of the engine’s operating speed or power. In contrast, a typical gasoline engine has a peak efficiency of about 30 percent at full throttle and operates at a much lower efficiency during typical driving conditions. “Double is a gimme,” Rabroker says of the StarRotor’s potential. “I think we can ultimately triple the fuel mileage.”

Double or triple, though, what´s important is that innovators are developing solutions to our oil predicament-solutions that could have a huge influence before the first hydrogen-powered car ever leaves the lot.

When Billy Baker isn´t writing about the automotive industry, he´s working on a book about the juggling subculture.