Lamborghini built a supercapacitor into its Sián hybrid for a faster, smoother ride

The battery-alternative charges quickly and does more than add horsepower. 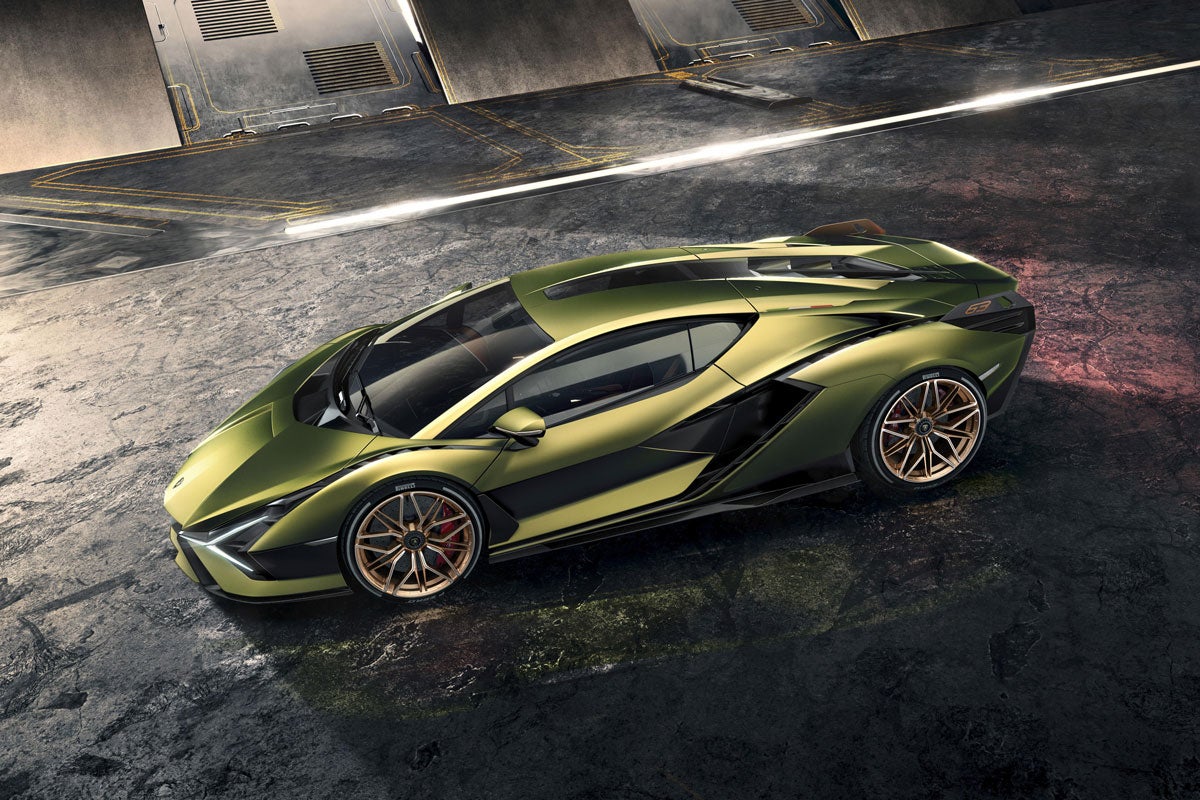 Lamborghini previewed the future of its hyper-performance cars with the announcement of the Sián, a hybrid-electric V12 that is the marque’s fastest and most powerful model yet. At 819 horsepower, the Sián (Bolognese slang for a flash of lightning) rockets to 62 mph in just 2.8 seconds. Its top speed exceeds 217 mph.

To achieve this performance, Lamborghini is employing a 48-volt, 34-horsepower hybrid electric motor built into the car’s transmission to supplement the 6.5-liter V12’s 785 horsepower. To maximize the effect of the electric motor, it is powered by a supercapacitor rather than the usual lithium-ion battery pack. These cells don’t hold a charge as long as a typical battery, but they charge in quickly and in short bursts. It’s similar to the tech Samsung uses to quickly charge the battery in the S-Pen stylus that comes with its Galaxy Note 10 smartphone.

The result is a very lightweight 75-lb. system that can very quickly absorb energy during braking and unleash it during acceleration. The electric motor also works in low-speed situations, such as parking, to make mundane chores a little easier in what would otherwise be a high-strung thoroughbred.

It also provides torque to smooth acceleration during gearshifts. Lamborghini’s old-tech automated shifting manual transmission can seem jerky when driven on the street, especially if the driver is expecting the experience of an automatic transmission. We’ve found that in track mode, those jerky shifts smooth out, but most of the time these cars will be driving on the road, where wide-open throttle track mode shift probably aren’t appropriate, so the smoother experience of the hybrid-electric-fortified transmission will surely be welcome.

And if the system means that I’ll be able to creep out of my neighborhood on electric power when testing Lamborghinis rather than annoying my neighbors with the bark of a lightly muffled V12 in the morning, that will surely be appreciated too.

There won’t be any Sián test cars, however, because this is a limited-production run of just 63 cars, all of which have already been sold. Lamborghini chose that number because it the year Automobili Lamborghini was founded. The original tractor company pre-dated the car company.

Lamborghini has openly spoken of its intent to apply hybrid-electric assistance to its iconic naturally aspirated V12 engines rather than turbocharge them in pursuit of improved performance.

Turbocharging provides such performance benefits, along with some efficiency gains in a carefully managed window of operation, so most car makers expect to apply forced induction universally to their gasoline engines in the same way that turbodiesels long ago pushed naturally aspirated diesels to extinction.

But turbocharging fundamentally changes the character of an engine. The “on steroids” headline cliche is apt; turbocharged engines are stronger than naturally aspirated ones, with muscle from low revs, while regular engines need to spin up to make power.

The turbines in the exhaust stream that recover otherwise lost energy also change the engine’s voice. In family cars, looking to boost power and efficiency, the change is irrelevant. When that voice is that of a shrieking Lamborghini V12 clawing its way to redline, the loss is comparable to defacing the Mona Lisa.

Which is why Lamborghini has eschewed turbos for the Sián, and says it plans to do so for other upcoming models.

Each of the 63 Sián Lamborghini builds will be distinctly unique, designed to the customer’s preferences in consultation with Lamborghini’s Centro Stile through the Ad Personam customization program.