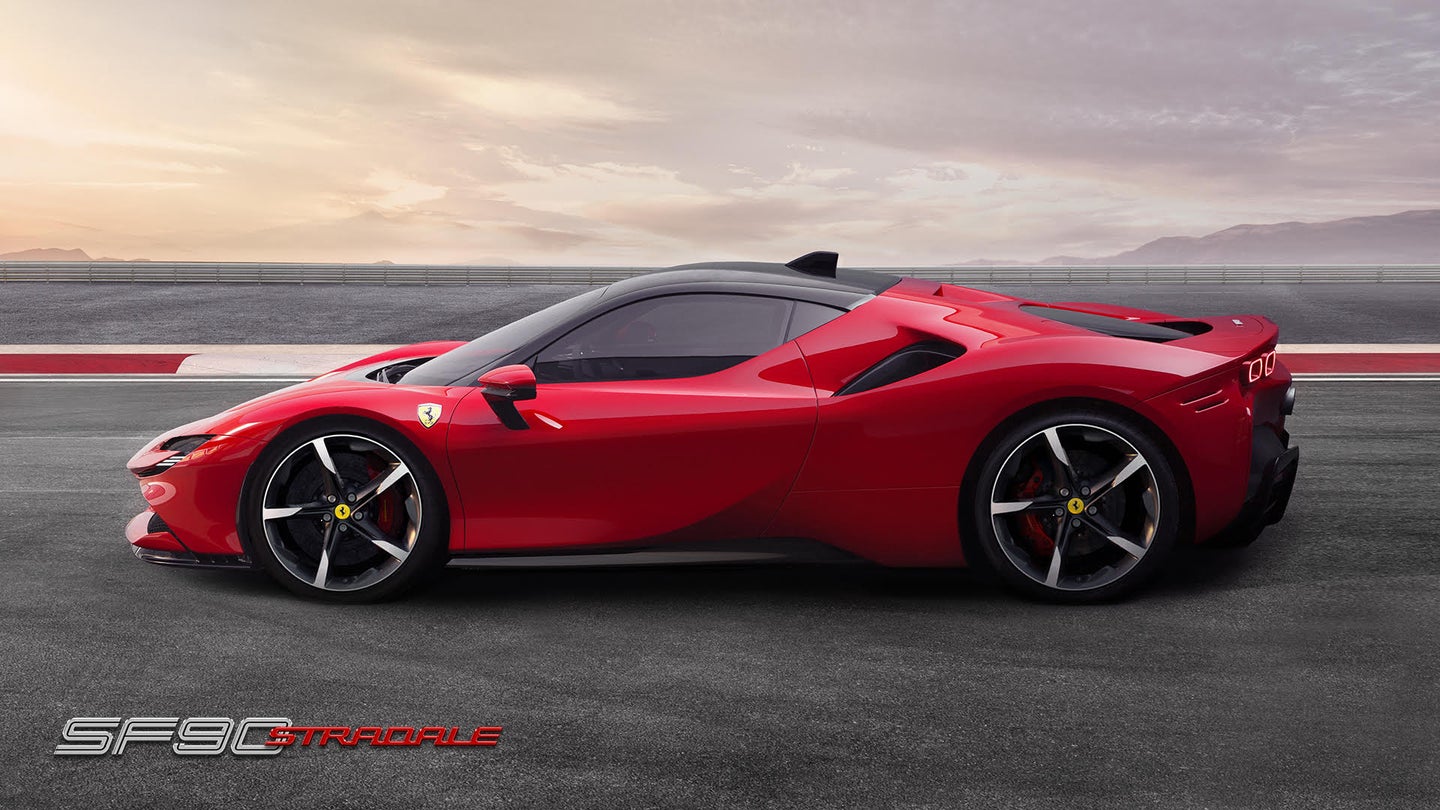 When Ferrari’s hybrid-electric LaFerrari debuted in 2013, the idea of a hybrid Ferrari, even one with 950 horsepower, seemed antithetical to the idea of the snorting prancing horse from Maranello.

The necessity of electric assistance has since become accepted, both to achieve higher performance and to permit vehicles to operate in European cities that restrict cars powered by combustion

Still, the announcement of the Ferrari SF90 (named for the 90th anniversary of the foundation of Scuderia Ferrari, Enzo’s racing team that predated his car-making company) comes as a bit of a shock: 986 total horsepower from an all-wheel drive hybrid-electric super sports car.

The LaFerrari, you might recall, was a V12-powered, limited-production flagship model. The SF90 is the successor to today’s 488GTB, the V8-powered entry-level sports car in Ferrari’s line.

While the LaFerrari’s sticker price was about $1.4 million, and the last car built, which was auctioned for charity, sold for $7 million, this faster entry-level machine should be available to regular Ferrari customers for a price approximating the $345,000 of the Ferrari Pista we tested recently.

The SF90 uses a twin-turbocharged V8 engine that is based on the one in the 710 horsepower Pista, but tuned for even more power, at 769 horsepower.. The SF90 not only has a more power combustion engine, but it has a trio of electric motors whose contribution brings the total system power to 986 horsepower.

One of the electric motors is connected to the combustion engine and sends its power through the SF90’s 8-speed dual-clutch transmission to the rear wheels in traditional Ferrari fashion. Each of the other two electric motors connects to the SF90’s front wheels, providing another route to get power to the pavement.

These contribute to 0-62 mph acceleration of a scant 2.5 seconds and to a top speed of 211 mph. Switched to electric mode for city driving, range is 15 miles using just the two electric motors powering the front wheels, making the SF90, at times, a front-drive Ferrari EV. What could be more responsible?

Ferrari achieved this by employing a carbon fiber rear bulkhead between the cockpit and the engine bay and substituting hollow aluminum castings for the previous ribbed castings.

Titanium components and changes in the exhaust system both help minimize weight too, but the addition of the 595-lb. hybrid drive system still pushes the SF90’s weight to 3,461 lbs.

In addition to the steering wheel-mounted control knob that Ferrari calls the Manettino, which controls settings for the Multimatic shocks, along with traction control, stability control and transmission shift characteristics, the SF90 adds a second such knob.

This is dubbed the eManettino, because it controls the SF90’s electric drive system, with four positions to select ‘eDrive’ for electric-only driving, ‘Hybrid’ for everyday driving, ‘Performance’ to emphasize speed over efficiency and ‘Qualify’ to maximize the available electric power.

As we’ve seen with the hybrid-electric all-wheel drive Acura NSX, the SF90 uses torque vectoring to all four wheels to help optimize the car’s handling in turns and electric brake-by-wire to maximize regeneration under braking. Early brake-by-wire systems were deficient in their response to pedal pressure and in the feedback they provided drivers, but Acura’s system in the NSX feels very confidence inspiring.

The only potential issue is that the feeling is entirely synthetic, so a car could convince the driver all is well with the brakes even when they have faded from excess heat build up from hard track driving. That seems unlikely, however, as Ferrari has collaborated with Brembo to develop brake calipers that incorporate cooling ducts meant to help manage brake temperatures.

The SF90’s 860 pounds of aerodynamic downforce presses the car to the road at 155 mph, which is perfect for hard laps at the track. The object, when designing the SF90’s body, was to minimize drag and maximize downforce while providing for the cooling necessary from a nearly-1000-horsepower drivetrain. This is in contrast to applying various additional aids to steer the air.

However, the SF90 has one active aerodynamic add-on it calls the ‘shut-off Gurney.’ It takes part of its name for the vertical lip applied to the trailing edge of wings that was innovated by the pioneering driver/engineer Dan Gurney, and the fact that it activates when the driver is braking, or ‘shutting off.’

This moveable flap deploys to uncover the powerful upper wing element at the rear of the car in fast corners, abrupt changes of direction or when braking, and Ferrari says it has applied for a patent on the design.