A new Jeep pickup, a redesigned Porsche, and more showed up in LA. 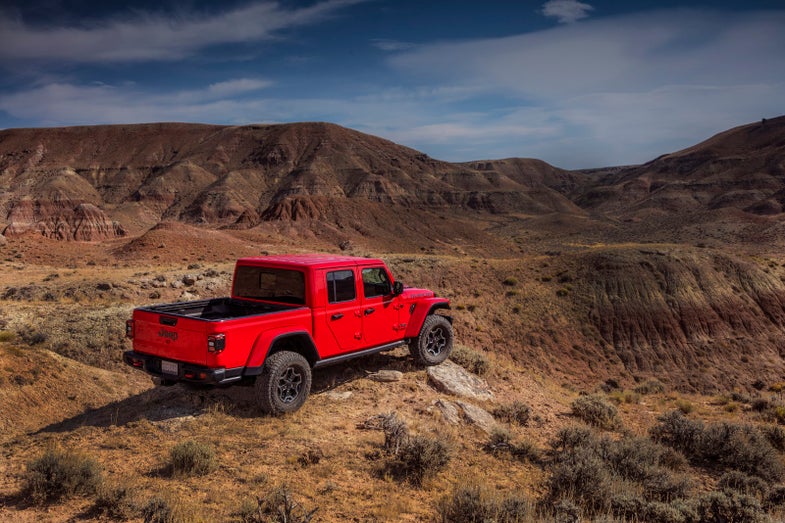 As the last major auto show of the year, Los Angeles — perhaps the quintessential American car town — annually plays host to a number of major car launches, and this 2018 is no different. Unsurprisingly, given industry trends, trucks and SUVs played a starring role.

We’ve assembled our seven (plus an extra bonus!) favorite vehicles unveiled this week in the City of Angels. Some will be hitting dealer showrooms soon, while others have a bit of work ahead of them before they become reality.

It’s reasonable to wonder about the future of auto shows as press gatherings, given the propensity for carmakers to hold private, pre-show events (like the monstrous BMW X7, which was revealed more than a month ago but makes its “auto show debut” in LA). But for now, they’re where car companies go to make a splash.

It’s been 16 years since Jeep last sold a pickup — the Comanche — but with the new Jeep Gladiator, it’s back on the truck train. To Jeep purists, it’s either the best or worst thing to happen to the brand (there is no middle ground), and we’ll bet that they sell a ton of them. Based on the terrific new Wrangler JL platform, the Gladiator should be a solid entry in the fast-growing mid-size truck segment, competing with the Chevy Colorado, Ford Ranger, and Toyota Tacoma. And it’s a real truck, too: The Gladiator sports a 7,650-pound towing capacity, more than double the Wrangler and 1,200 pounds higher than the best Tacoma.

A “smaller” version of the excellent Lincoln Navigator (down to “just” 199.3-inches long from the Navigator’s 210-inches), the three-row Aviator is packed with interesting tech, including a plug-in hybrid-electric system that will allow for a range-not-disclosed electric only travel mode, as well as a smartphone-as-a-key system that hopefully works more reliably than the one in the Tesla Model 3. The competition is fierce in this segment (Volvo XC90, BMW X5, Audi Q7), but given how popular its big brother is, the Aviator seems prepared to take flight.

I have a soft spot for the Mazda3 because it was the first new car I ever bought, but also because it’s absolutely terrific. This year, it gains an all-wheel drive system and the company’s new Skyactiv-X four-cylinder engine that features compression-ignition, which doesn’t always need to use spark plugs to create combustion and gains in both fuel economy and power because of it. Diesel-powered engines are compression-ignition, but this will be the first commercially available that’s powered on gasoline.

No dramatic redesigns here, but it’s the eighth-generation 911. For those who care, it’s a big deal. For those who don’t, the classic joke is “I thought it was supposed to be redesigned.” They did redesign the shifter to make room for a new cupholder, though.

Beware of articles calling this a “Tesla killer.” Yes, Audi says it’s coming in 2021, and yes, it’s electric and will have excellent range. But it’s not real yet, and it’s hard to kill a car with something that doesn’t exist. Still, it looks incredible and Audi promises 590 horsepower, 0-60 mph in 3.4 seconds, and a range of 248 miles on the optimistic European test.

Rivian is an electric car startup, and the history of electric car startups is not good. But that hasn’t stopped a rabid automotive press from writing about the R1T, the $69,000 all-electric pickup that the company unveiled in LA. It says it’ll come with a 105 kWh battery pack, good enough for about 230 miles of range, when it ships in 2020, with a 135 kWh version capable of more than 300 miles coming soon after launch. It’s also working on the R1S, a three-row SUV built on the same platform. Rivian already has 600 staff and a factory in Michigan, so perhaps there’s more than just vapor here. If these cars do make it to market, Rivian has plenty of room to expand its “Skateboard” platform, which integrates the batteries and motors into one platform that can be adapted to different vehicles.

It’s an electric VW bus! But, like the R1T, it’s also not real and Volkswagen says it’s coming early next decade. It’s slated to get a 48 kWh battery and a 201-horsepower electric motor driving the rear wheels, with 110 kWh and all-wheel drive components coming later on. Supposedly. But hey, it’s an electric VW bus!