The 2020 Taycan is finally official. 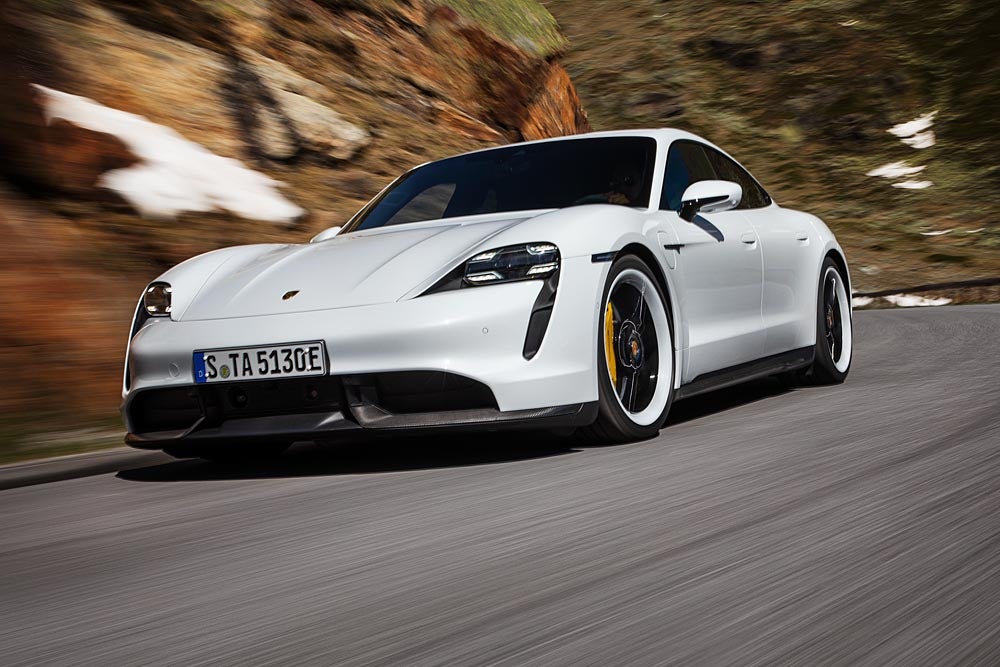 After months of previews, Porsche has finally revealed its first step into a post-combustion car market with the introduction of the 2020 Taycan. The 750-horsepower, 774 lb.-ft. all-wheel drive, four-door rocket ship launches to 60 mph in as little as 2.6 seconds and reaches a top speed of 161 mph.

That’s in $187,610 Turbo S form, with the Overboost and launch control performance options set to maximum, as we’ve seen previously with Tesla’s “Ludicrous” mode. Electric vehicle batteries like to be treated more gingerly than that for maximum life, which is why EV makers have a special mode to deliver maximum performance rather than just having it on tap all the time.

The Taycan has turned a 7:42 lap of the Nurburgring, which doesn’t break any records, but does put it on par with older mid-engine V12 supercars like the Lamborghini Murcielago and the Pagani Zonda.

While existing EVs can often achieve eye-popping performance over short distances, they tend to overheat and switch to a lower-powered mode to protect their components. Porsche kept going with the Taycan beyond its fast lap, achieving a distance of more than 2,100 miles over 24 hours for an average of nearly 90 mph even with the stopped time for charging.

The $153,310 Turbo is rated at 670 hp and 626 lb.-ft., and these two high-end models will be the only available versions of the Taycan (pronounced “Tie-con”) at launch, with regular base models to follow later.

Porsche has decided, apparently, that it has so much equity in the Turbo nomenclature that it is going to continue using it for non-combustion performance models. This is part of the company’s greater migration toward an electrified fleet that will total half of the brand’s sales by 2025, according to Detlev von Platen, Porsche’s board member for sales and marketing.

“Porsche is moving from being a builder of sports cars to being a provider of sporty and exclusive mobility,” he explained at the Taycan’s media introduction in Niagara Falls. If Porsche fans aren’t quite ready for non-turbocharged Turbos, well, Porsche isn’t waiting for their permission.

The official driving range rating for the 93.4-kilowatt-hour lithium-ion battery pack is 280 miles on the European driving cycle. There are no official EPA range numbers yet, but its charging time from 5 percent to 80 percent can be as little as 22.5 minutes using a 270-kilowatt DC quick charger. This speedy time is possible because the Taycan is the world’s first 800-volt EV, rather than the 400-volt level that is the current standard.

Another innovation is the use of a two-speed transmission for the rear axle and electric motor. This gives the Taycan stronger acceleration without over speeding the electric motor at high speeds. Two-speed transmissions are a common announcement component that has so far not achieved production in an EV because of the punishing torque delivered by electric motors. The original Tesla Roadster was supposed to use one, but the company changed to a direct drive system before production.

Porsche claims the Taycan’s motors have the most power from the least space of any in the industry. This is thanks to “hairpin” windings of the stator coils, which pack more copper into less volume than is otherwise possible, according to the company.

In keeping with the Taycan’s high-tech theme, the cabin is awash in screen real estate and sparing in the use of traditional switches and knobs. One prominent knob on the steering wheel lets drivers select among drive modes; Normal, Sport, Sport Plus, Range and Individual.

While the Taycan has the now-typical array of display screens seen in most premium cars, with a digital instrument panel and two screens in the center of the dashboard, the car also has an optional fourth display in front of the passenger seat. This one lets the passenger use the GPS navigation system while the car is in motion with none of the driver lockouts applied to the other screens that are within the driver’s reach.

While the Taycan’s silhouette is reminiscent of the Panamera, it is a smaller car, with cabin space more similar to that of the Aston Martin Rapide sedan. Sliding into any of the Taycan’s four sport seats cocoons the occupant into place. There’s no excess of rear-seat legroom, but a six-footer can sit comfortably behind another six-footer in the front seat.

Luggage space is similarly snug, with a small 2.8-cubic-foot front bin and a 12.9-cubic-foot trunk that will require some thought while packing for four people. But the Taycan looks as futuristically exotic as Doc Brown’s DeLorean ever did, so perhaps where the Taycan is going, we don’t need suitcases.