The Toolmongers take a hybrid beast out for a spin 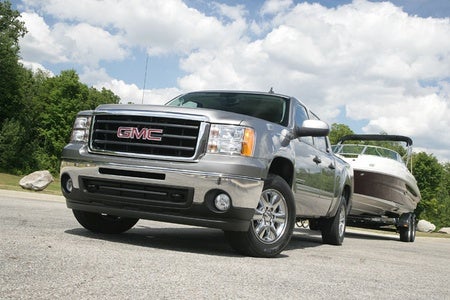 Think battery power and regenerative braking are only for granola-eating hippies? Think again. GM was kind enough to give us a little time with their new-for-2009 (read: available in the first half of next year) Silverado hybrid. And we tried something you can’t do with a Prius: We tooled around town with three people onboard — and a 20′ SeaRay boat out back.

But is this an option for which you’ll ante up a couple grand next year? Read on past the jump for our hands-on experiences and video footage.

Like all hybrids, the Silverado recovers energy during braking and coasting, storing it in a 300V bank of NiMH batteries located under the rear seat. Instead of idling when you stop at a light, the truck shuts down the engine, powering accessories like the a/c compressor and power steering with electric motors.

As you accelerate from a stop, the Silverado starts out on battery alone, delivering power via two electric motors directly attached to the transmission. When the load is too much for the motors, GM’s electronics automatically start the engine and feed in gas power through planetary gear sets. GM calls this “hybrid mode.” If you mash the right pedal even harder, the truck enters “engine mode” and powers the wheels totally with the gas engine under the hood.

GM calls the Silverado a “two-mode” hybrid because they optimize each of its two electric motors for separate purposes: one for stop-and-go city use and the other for supplementing engine power at highway speeds.

The Silverado also incorporates GM’s active fuel management system, which shuts down cylinders to convert its V8 into a V6 or even V4 when under light load — or when the hybrid’s electric motors can provide enough assistance to make up the difference in power. And the hybrid incorporates a re-designed front air dam and factory-standard tonneau cover to reduce drag and further improve fuel economy. 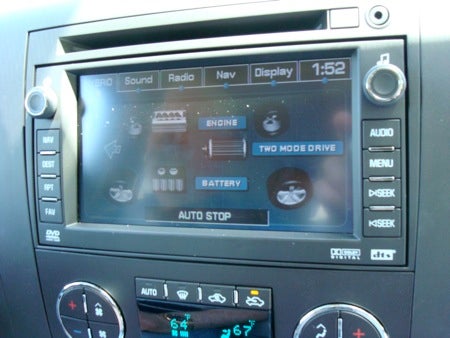 We drove a short-bed crew cab, similar in most every way to other 900-series trucks. Our model was equipped with a mid-level interior package complete with climate control and a touch-screen-based driver information/entertainment system [left]. On hybrid trucks like ours, this system can also display a moving graphic indicating the vehicle’s current power mode and charging status.

Also specific to the hybrid is an “auto-stop” indicator located between the lower “peg” and the 1,000 RPM point on the tachometer and an “efficiency” gauge to the right of the tach. Unlike old vacuum gauges that just show how hard the engine is working, the Silverado’s “efficiency” gauge is operated by the truck’s computer, giving you an aggregate view of how the whole system’s working. Keeping the efficiency needle at the 12 o’clock position saves you the most bucks at the pump.

As a plain ‘ole truck, we enjoyed the Silverado. The interior was very comfortable and quiet — even in “engine mode” — and we’re impressed by the improvement in ride over earlier trucks. Compared to our 1990 Chevy budget project truck (and even other mid-’90s trucks we’ve owned and driven) the Silverado rides like a Cadillac.

It’s admittedly a bit odd to see the engine stop and start on its own, and it’s entertaining to watch the stereo’s LCD display the charging/motor system’s status. But if we ignored the gauges and just drove the damn truck, it felt pretty much like every other truck we’ve driven. The transitions from battery to hybrid mode and hybrid to engine mode feel mostly seamless, though Sean did experience a little drop-out in full-throttle acceleration. But the big question is: Does it tow?

Absolutely. [check out the video below] It’s important to remember that even though this Silverado’s a hybrid, it’s still got a 6.0-liter V8 under the hood ready to ante up when the pulling gets tough. But even with the boat out back, we saw the Silverado entering battery-only and hybrid mode from time to time. And the additional braking energy expended stopping the rig translates into additional battery charge.

Granted, you’re not going to spend a lot of time under battery-only power while towing. With the a/c shut down and a very light foot, we managed to yank the boat along at about 15-20 mph with battery alone. It’s an interesting experience, especially for one standing outside as the truck passes by: It’s so quiet that you can easily hear the trailer’s springs squeaking and frame flexing and creaking.

One wonders why trucks weren’t the first target for hybrid technology. In our experience, many Toolmongers drive more truck than they need on a daily basis in order to retain the capability to haul large loads, tow a heavy trailer for work (or a big-ass boat or camper for fun), or off-road.The Silverado’s complex drive system boosts its EPA-estimated MPG from 14/19 to 20/22 — a pretty significant increase. If you do a good chunk of city driving and put about 15,000 miles a year on your truck, opting for the hybrid would save you around $1,000 annually. Though GM hasn’t released pricing yet — we drove an early production sample — we did hear that the Silverado’s hybrid option would likely ring up a bit lower than the similar option on SUVs, so expect to pay $3,000 to $4,000 for it.

So we guess it’d just about pay for itself in three years. Your mileage may, of course, vary significantly. If you’re easy on the throttle and don’t haul very often, you might see significantly more than 20/22. (Or if you’re Sean, you’ll probably see a lot less.) And the more you drive — and the more the price of gas climbs — the more you save. If you qualify for state or federal hybrid-purchase tax breaks, this might be a no-brainer. At least you can drive to work in the carpool lane.

One thing’s certain: After driving it, there’s no doubt in our minds that the Silverado hybrid retains its capability as a truck — including a 6,000 lb. towing capacity. (Considering GM’s recent experience with hybrid SUVs, this isn’t surprising.) Four-wheel-drive versions will be available later next year.