This is Jaguar’s first real attempt to take on Tesla

New I-Pace is a breakthrough achievement—and a hell of a fun car. 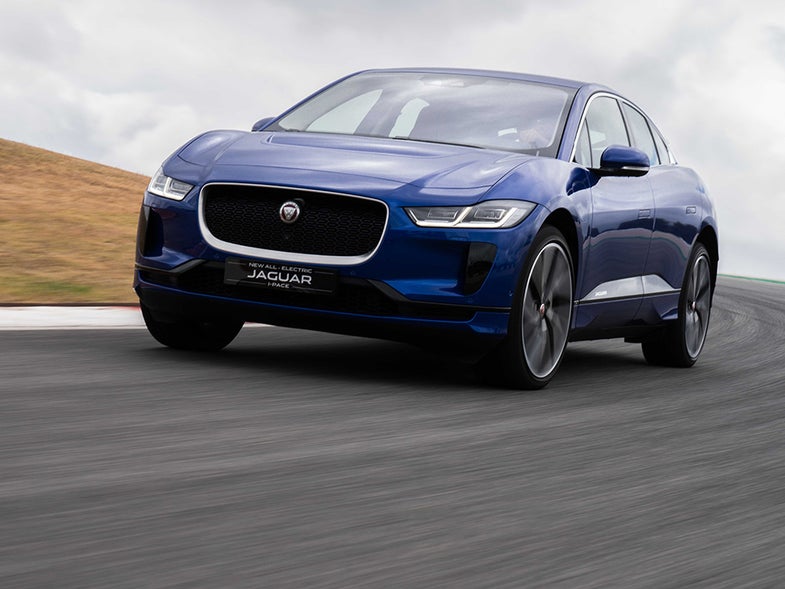 If you drive Jaguar’s new, all-electric I-Pace, then shrug because it doesn’t growl like a jungle cat, I can’t help you. If you find yourself put off by the fact that it needs charging every 240 miles or so, please move on. If you flog the bejeezus out of it at a racetrack—as I did at Portugal’s Algarve International Circuit—and then sniff that it doesn’t offer the balletic synchrony of gears shifting a hundred times per lap, then yeah, maybe this Jag isn’t for you. But for the rest of us rubes, there’s are few undeniable thrills. This quiet beast provides astonishingly brisk acceleration (4.5 seconds to 60 mph), a fierce 400 horsepower, and stuck-to-your seat 512 pound-feet of immediately available torque. For these reasons and more the I-Pace, starting at a retail $69,500, is a significant achievement for Jaguar. It’s also the industry’s first legitimate run at Tesla’s lock on a premium, full-size performance EV—a lock it has held since the Model S debuted six years ago. It’s also worth processing one other fact: This milestone doesn’t come from one of familiar tech giants like Audi, BMW, Mercedes, and Lexus. It comes courtesy of the once struggling but now resurgent Brits. Jaguar! Of all brands! Every other auto maker, if they even have a long-range EV in the works, is at least a year behind.

While established carmakers can’t just cough up premium EVs with the flick of a switch (the battery and motor technology has to be fully baked and built to the standards of the companies that make them) the I-Pace is the completely baked real deal. Built in Austria by renowned carmaker partner Magna Steyr, it boasts an impressive powertrain. It uses a 90 kWh lithium-ion battery pack manufactured in partnership with LG Chem. First off, safety. The pack is crash-protected via a robust cage that minimizes the risk of puncture and fire in an accident. Next up, configuration. It has 36 modules containing 432 pouch cells, as opposed to prismatic or the cylindric battery cells Tesla favors. “Pouches are the most energy dense configuration and the most efficient for cooling,” said Simon Patel, I-Pace’s senior powertrain manager. “It’s also the most up-to-date cell chemistry on the market, and the best option for balancing both range and high-speed performance.”

That became evident during my drive on the track, where the cars—kept flat by their suspension and ultra-stiff chassis and nudged through corners via the dual motors’ precise torque vectoring—had endured repeated thrashing without losing their responsiveness or quickness during the day’s test. Under normal road conditions, the car similarly never felt lacking in power even after several hundred miles on the road. In either context, the battery was always ready to deliver full power. Part of this readiness can be attributed to the car’s heat management system, which persistently keeps the batteries at optimal performance temperatures. According to Patel, there are two liquid cooling systems, one for the drivetrain and one for the battery, including a heat exchanger that, on colder days, allows for heat from the systems to be directed into the cabin, so electricity isn’t wasted on passenger heating.

The dual electric motors, designed in-house but built by a third party, were another challenge for engineers. Jaguar wanted to keep the powertrain compact and power-dense. Its permanent-magnet motors, as opposed to the induction motors popular with other manufacturers are more expensive because of the cobalt used in the magnets, Patel explained. But the powerful magnets help minimize the motor size requirements. This, along with equally compact transmission and differentials, improves their flexibility in terms of placement and frees up space for designers.

The key difference, by the way: AC induction motors don’t have their own magnets, so they use some of the battery power to induce the magnetic currents necessary for power generation in electric motors. But permanent-magnet motors don’t have to do that, so there’s no range penalty as with induction motors. That said, induction motors are better for extreme performance—hence the Tesla Model S P90D’s ability to muster sub-three-second 0-60 times and highway cruise speeds of 155 mph. The I-Pace’s somewhat more modest 124 mph top speed and 4.5 second 0-60 time is still no slouch compared to similar crossovers.

The motors have also been engineered for smooth torque delivery and high regenerative-braking capability, in which the electric motors convert to generators during deceleration in order to feed electricity back into the battery pack. The I-Pace is capable of up to 0.4 G’s of motor-induced deceleration, allowing what’s known as single-pedal driving. That is, when you take your foot off the throttle, the car essentially brakes itself down to a stop solely via the electric motor, minimizing the use of the actual disk brakes, and thereby extending their lifespan, as well. This effect is adjustable, so drivers who prefer a less pronounced effect can dial it in as they like.

Another advantage of the compact powertrain: a lower center of gravity. The driveshaft goes through the middle of the motor and the center of the transmission instead of being offset and attached via reduction gears. This concentric design allows the components to sit lower. Coupled with an equally low-slung battery pack, sitting beneath the passenger compartment, the car has a comfortably low center-of-gravity, allowing it to stay flat and stable even in hard cornering.

More generally as an electric car, the I-Pace hits a lot of notes that Tesla enthusiasts will recognize—over-the-air software updates, remote access to vehicle systems through a mobile app, and such breezy convenience touches as starting the car simply by putting your foot on the brake. But it also departs from some of Tesla’s hallmarks, including its broader utility—in particular in terms of off-roadability.

Thanks in no small part to its relationship with corporate sibling Land Rover, the I-Pace has legitimate off-road chops. It can wade into water up to 19 inches deep, scramble over rocks, and both climb and descend steep terrain with its computer modulating both throttle and braking. The driver does have to steer. On my test drive, this all proved a startling marvel as forded a stream and climbed a steep mountain trail—in an EV.

The interior design also appeals to the premium enthusiast. While Tesla’s models all share minimalist and open interiors, the Jaguar feels is all conventional crossover on the inside, though one built and designed to Jag’s premium standards, with leather and wood and a well-designed two-screen center console in place of the mammoth single-screen setup that Tesla deploys. This is deliberate—though the Tesla’s interior vibe is indisputably airy and futuristic, Jaguar wanted its customers to feel fully and comfortably enveloped by their machines. It’s more of a cocoon, in a good way that also makes it feel more substantial than the Tesla’s interiors, given what you’re spending for either.

Care, upkeep, and charging of the I-Pace also feel familiar to that of Tesla. You can charge the battery to 80 percent in just 40 minutes via a common 100 kW DC fast charger. Your home’s 230V/32A AC wall box will get you there in 10 hours. On-board range-optimizing tech includes battery preconditioning while plugged in—that is, keeping the battery temperature optimized despite hot or cold ambient temperatures, which can impact battery performance. This keeps the battery primed for maximum range without using battery power to reach that temperature after the journey starts. The navigation systems can locate chargers for you while traveling, and the eco mode helps dial down internal systems so you can extend range in a pinch. Jag’s perks include an artificial intelligence-based system for learning each driver’s music, seating, and navigation preferences, and then customizing the drive experience thereafter. You can also loop in your Amazon Alexa voice assistant so you can ask it how much charge you have, etc. USB ports abound, and there are, of course, a multitude of convenience and entertainment apps in the infotainment system.

Such creature comforts, while appealing and a boost to the driving experience, are in fact easy to achieve. The real value of this car comes in ride and performance. The benefits of electric propulsion are by now well known—whisper-quiet cruising and a steady torque that provides quick acceleration. The I-Pace has those. But it has them tuned exceptionally well, with extremely low wind and road noise. These things rise to great prominence in EVs, where they can’t be masked by engine noise. But even at full acceleration or 100-mph-plus cruising, the car feels calm and luxuriously muted. It’s low-slung crossover profile cuts a clean hole in the slipstream ahead of you. Prowling around the countryside like that, you can’t help but feel that’s what driving really should be. I love a great internal combustion V6 as much as the next driver, but this is something quite special, too.