Why Volvo will start ‘mega-casting’ its new electric vehicles

It could be an important way to simplify the process of building future EVs in Sweden. 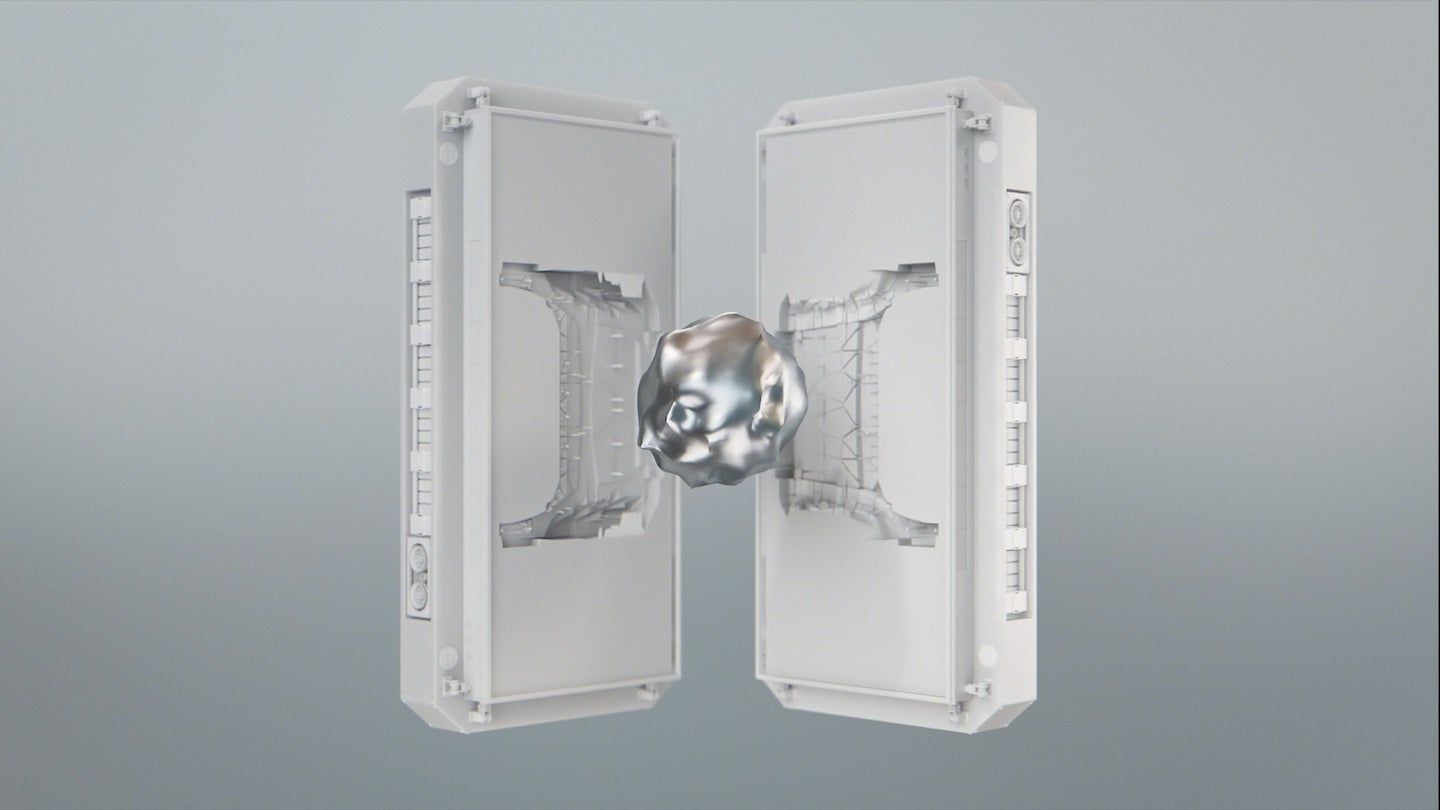 This metal is going to get squished. Volvo
SHARE

Swedish automaker Volvo is on the cusp of implementing a revolutionary new way of building its latest electric cars. As part of a $1.1 billion investment into its assembly plant in Torslanda, Sweden, Volvo is adding a technique called large-scale casting to its auto-making process. That means what used to take multiple people or machines to assemble large panels and floors of a vehicle can now be done in one quick operation.

Mega-casting, as Volvo calls it, is a way for the automaker to simplify the car-building process. The end goal is to replace many small parts with one large metal casting, allowing for more efficient manufacturing as well as more flexibility in the design and production process. This means less welding, less assembly, and less room for error when assembling a vehicle.

One example part that will be made using mega-casting is the floor structure of Volvo’s upcoming lineup of electric cars. Given the size of the vehicle floor, Volvo will need to use extremely large molds that operate at very high-pressures.

While Volvo hasn’t revealed its secret sauce behind mega-casting, the die-casting process is largely the same for any metal, or in the case of injection molding, plastics. In this case, molten metal is quickly forced under pressure into a reusable mold. The liquid metal then flows into channels and crevasses, eventually forming whatever that part might look like—in Volvo’s case, that part more closely resembles a large portion of a vehicle.

Once the metal hardens into shape, the part is then released and quenched in water to cool completely before it undergoes finishing. Using high-power lasers, Volvo removes the unwanted excess material left over from the manufacturing process and performs several other tasks needed to make the part usable in the construction of a vehicle. Once the part is finished, it can be used in the final construction of the vehicle, or sent back to a foundry so it can be easily recycled and cast again should any imperfection be found.

Using this production method coupled with electric motors and batteries, Volvo is able to completely rethink the modern modular vehicle architecture. Mikael Fermér, the lead engineer behind Volvo’s mega-casting, told Auto Express that tailoring a platform to a specific car is as simple as producing a new casting. For example, shifting from making a front-wheel-drive subcompact (like a Ford Fiesta, Toyota Yaris, or Mini Hatch) to a large three-row vehicle would simply require using a different floor casting to create the underpinnings.

The single-piece casting also helps to add structural rigidity to the vehicle. When coupled with battery packs, the chassis stiffness is greatly improved. That means the vehicle can be both more nimble, and potentially fare better in an accident.

Volvo says that its mega-casting procedure also helps to reduce its carbon footprint during the manufacturing process. But more importantly, it also helps reduce the environmental impact of its cars after they leave the assembly plant. Electric vehicles tend to be heavier than gas-powered cars, and since Volvo is using this method to manufacture its EVs, it can also be used to help mitigate the non-tailpipe emissions created by heavier vehicles. Lowering the vehicle weight creates a more efficient car that consumes less power when driven, but also reduces non-exhaust emissions from tire, brake, and road surface wear commonly exacerbated by heavy electric vehicles.

[Related: Looking Back At The First 40 Years Of The Automobile]

In case this sounds a bit familiar, Volvo isn’t the only automaker to take up large-scale casting in the construction of automobiles. Tesla recently began casting parts for its Model 3 and Model Y vehicles using its own 6,000-ton casting machine called a “Giga Press,” showing that the rest of the industry may soon adopt this manufacturing technique as a way to reduce overall assembly complexity and make vehicle platforms even more modular in the future.

The new die casting machine at Torslanda won’t be the only improvement Volvo’s billion dollar investment will bring. It will also accompany a new paint and final assembly area, as well as a battery assembly plant for the automaker’s partnership with Swedish battery-maker, Northvolt. Volvo is aiming to become a completely battery-powered brand by 2030, and these new additions to its plant will just be some of the first steps in this journey.