Yesterday, GM announced that it would start using an advanced lithium-ion electrode material developed by Argonne National Laboratory. Turns out that an early version of that material is already blended into the Volt’s batteries. But that’s not the end of the story: Expect dramatically better EV batteries based on the compound very soon 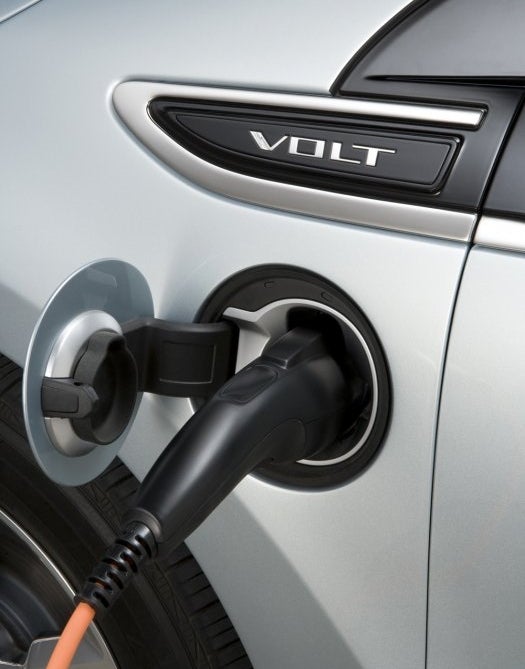 There was a puzzling moment in the conference call GM held yesterday to announce its licensing of a new high-energy battery-electrode chemistry from Argonne National Laboratory. Mohamed Alamgir, research director for LG Chem’s subsidiary Compact Power, which builds the battery cells for the Chevy Volt, mentioned that the new license covered technology the companies were already using. This didn’t seem to make sense: LG Chem has always said that the Volt’s batteries were built on a compound called lithium manganese spinel. Was he saying that this new compound — which has a long and unwieldy name* but which is most easily referred to as nickel-manganese-cobalt, or NMC — was already in the Volt? Last night a source with deep knowledge of the subject confirmed that this is indeed the case: The battery cells LG made for the current-generation of Volts already have an early version of the “new” compound blended into them, along with the previously advertised manganese spinel chemistry.

A little background: A battery contains two electrodes: the cathode (positive) and the anode (negative). Most of the lithium-ion batteries available today use an anode made of carbon. There are a variety of cathode chemistries, however. The bulk of the research dedicated to improving lithium-ion batteries over the past two decades has focused on the cathode: on finding new materials and tweaking them atom by atom to make a better battery.

Until yesterday we thought lithium manganese spinel was the sole active ingredient of the Volt’s battery. Lithium manganese spinel made its way into the Volt (and the Nissan Leaf) because it’s safer than the lithium cobalt oxide batteries used in consumer electronics and sufficiently powerful for use in a car. (“Power” refers to how quickly a battery can discharge the energy stored inside.) But there’s only so much you can do to improve cathode chemistry before you run up against the limits of nature. Fundamental improvement generally requires using a new chemistry.

That, or blending two chemistries together. Spinel-based cathodes, while safe, have a weakness: they can’t store as much energy as other cathode chemistries. Indeed, finding a battery chemistry that delivers everything automakers need from an electric car battery—safety, high energy density, high power, long life—is the eternal challenge of battery science. But battery manufacturers have discovered that by mixing Argonne’s compound, which has a higher energy density than manganese spinel, they can get the advantages of both. Of course, GM and LG Chem only announced that they had a license to the Argonne compound yesterday, which is presumably why they’ve been so cagey about admitting that the battery cells in the Volt already used it. (By the time this post went live, a GM spokesperson hadn’t returned a follow-up call.)

So that’s the latest revelation about the Volt—but there’s promising news about the future of electric vehicles, too. Researchers have figured out that it’s possible to make lithium-ion battery electrodes using straight NMC—no blending with manganese spinel required. That’s a breakthrough that could lead to dramatically better electric cars and plug-in hybrids in the very near future. NMC can store up to twice as much energy as today’s widely used cathode chemistries. It also has a much longer cycle life, meaning it can be charged and discharged many more times before it loses its capacity. This is a major benefit: Today, the Volt uses only 65 percent of its battery; it carries around a 35-percent cushion to ensure that the battery will last for the life of its eight-year warranty. But that unused 35 percent is expensive. If you have a battery with a dramatically longer cycle life, you don’t need as much cushion—and that makes for a cheaper battery, which in turn leads to a more affordable car. In yesterday’s conference call, GM Ventures president Jon Lauckner said it was “Probably the most capable cathode material we have seen out there.” Alamgir said that batteries based on the new chemistry will be built in the company’s stimulus-funded Holland, Michigan plant, which will be up and running by 2012.

Rumor has it that this isn’t the end of the cathode-chemistry story. We’re expecting more announcements on this subject at next week’s Detroit Auto Show, and we’ll be there to report back.

This is the first post in a new blog series by Seth Fletcher, Senior Associate Editor at PopSci and author of Bottled Lightning: Superbatteries, Electric Cars, and the New Lithium Economy,_ to be published in May 2011 by Hill & Wang/Farrar, Straus & Giroux. The book is about lithium, the rechargeable lithium battery, and the technological transformations it has helped (or will help) make possible—the wireless revolution; the burgeoning electric-car revival; the coming spread of clean energy. The blog is about the same thing. Expect posts about lab-scale research on far-horizon battery technologies; dispatches on the accelerating electrification of the automobile; updates on the nascent American EV-battery industry and their vastly larger and better-entrenched competitors in Japan, Korea, and China; posts on the mining of lithium and other so-called “technology metals”‘; and the occasional look at the political and economic pressures that can steer the course of this emerging industry. Seth will also be posting off-the-cuff observations on these and other subjects on Twitter._