Toyota is finally charging ahead with its electric vehicle plans

The company revealed 15 EV concepts earlier this week. Here's what they look like. 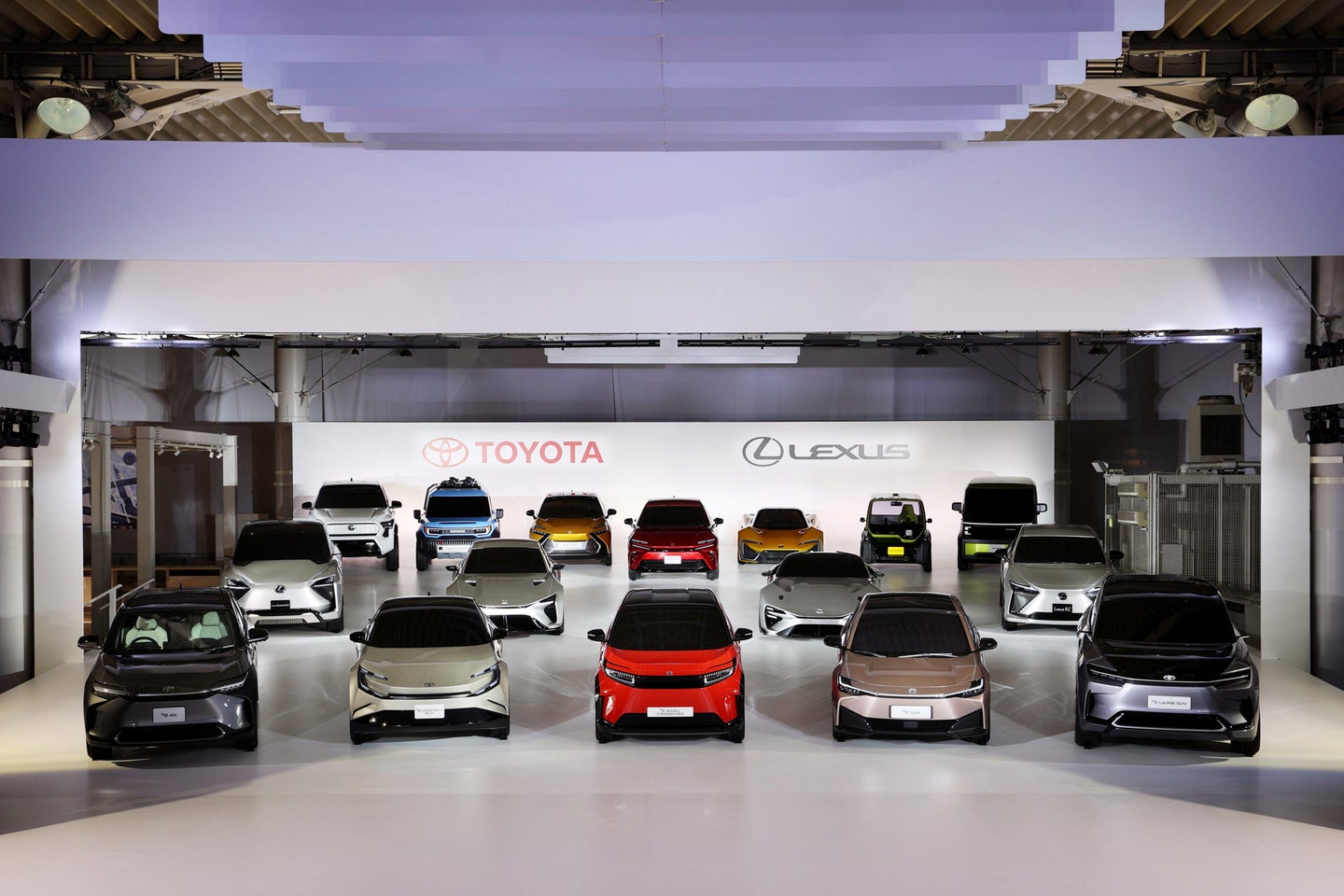 Electric cars are resculpting the world. While gasoline still reigns supreme, vehicles propelled by battery power are quickly becoming the way forward for many automakers—including Toyota, which finally revealed its overwhelming support for electrification with 15 brand new battery-powered concept cars.

On Tuesday, CEO Akio Toyoda took to the stage at a media briefing in Tokyo to reveal the automaker’s future EV strategies across the Toyota and Lexus brands. During the CEO’s time in the spotlight, he revealed plans to electrify a whopping 30 new and existing models over the next decade. And while the name of the game is green energy and electric efficiency, the company is also pledging not to forget about vehicles for work and play.

Toyota’s literal curtain-dropping event resulted in the automaker showing off 15 new concept vehicles, all of which will be underpinned by Toyota’s much-needed commitment to electrification. Despite being the purveyor of the Prius, the company hasn’t necessarily been so keen on full electrification in the past. The automaker previously placed its bet on hydrogen power over battery-electric vehicles, which gave competitors like Volkswagen a bit of a head start in electric vehicle technology.

Leading the pack will be Toyota’s flagship brand, Lexus, which will offer an electrified version of every vehicle it sells in North America, Europe, and China by 2030. It will also axe the combustion engine completely in these markets by 2035. This begins with the launch of the Lexus RZ crossover in 2022, which is built on the same platform shared by the upcoming Toyota bZ4X and Subaru Solterra.

[Related: Toyota and Subaru are teaming up for this spacious electric SUV concept]

Lexus will also launch electrified vehicles in at least three other segments, including a full-size SUV, a sedan, and a supercar that supposedly inherits some of the best driving characteristics from the legendary Lexus LFA—only with electric motors powering the wheels instead of a gas-gulping V10. Toyota didn’t reveal much about its electric supercar, but did hint that it would have more than 430 miles of range, a zero to 60 MPH time in the low-two-second neighborhood, and the possibility of solid-state battery tech.

The company will also launch a number of vehicles under the Toyota nameplate, including a number of crossovers and SUVs in all sizes (full-size, standard, and compact), plus an ultra-efficient small urban crossover, as well as a midsize sedan.

Toyota also previewed three niche concepts that feel like lifestyle vehicles. A sports coupe similar in styling to the Supra, a pickup truck, and a new take on the iconic off-road capable FJ Cruiser called the Compact Cruiser all made appearances on stage.

Presently, Toyota offers two pickups, the midsize Tacoma and full-size Tunda. The concept shown at the event likely previews a midsize pickup, given the Tacoma’s status as a top-seller in Toyota’s lineup. This would represent one of the first electrified pickups in the segment, as the currently-announced offerings from other automakers (like the Ford F-150 Lightning, Chevrolet Silverado EV, GMC Hummer EV, and Rivian R1T) are all full-size. It’s not yet clear if Toyota will have an offering in both segments as it transitions to battery power.

Finally, Toyota also showed off two futuristic van concepts that it calls the Micro Box and Mid Box. The names refer to the size, with the Micro Box the smaller of the two. The automaker didn’t reveal exactly how these two concepts might slot into its lineup, but it may possibly target commercial markets (like the Toyota e-Palette) or last-mile deliveries.

Earlier this month, the automaker announced its plans to build a battery plant in North Carolina, a move which comes after a $3.4 billion pledge towards “automotive batteries” in the US throughout 2030. Toyota believes its gambit will help the company sell as many as 1.8 million electrified vehicles stateside (and 3.5 million globally) over the next decade.

And while these vehicles were all just concepts, the first modern and totally battery-powered car from Toyota we know about will be the 2022 Toyota bZ4X, which is expected to go on sale in the spring.

Watch the event, below: