In photos: A car’s journey from trash heap to brand-new engine 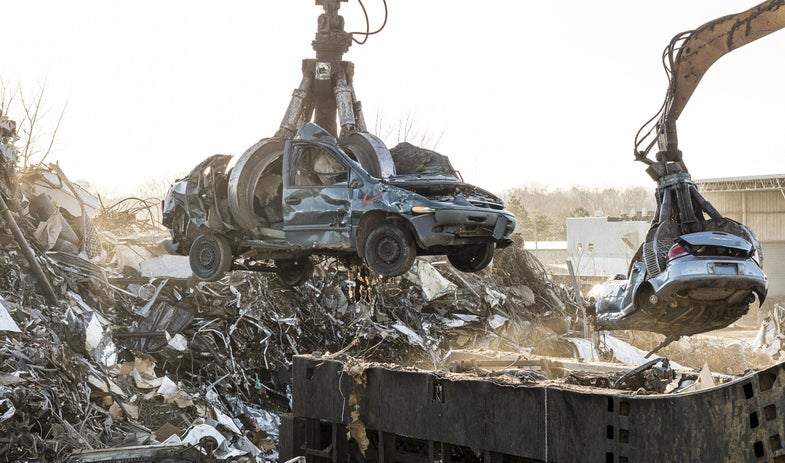 Like people, cars die. But they won’t be buried. U.S. scrappers recycle some 13 million autos each year. Their journey begins at salvage yards, where massive machinery reduces mountains of rundown bodies to reusable metal bits. The vehicular refuse then heads to foundries to start its new life as engines. This is what that trip looks like.

A scrapyard in Grand Rapids, Michigan.

Junked cars pile as high as five stories at the 20-acre Padnos scrapyard in Grand Rapids, Michigan. They don’t sit there long: The heap’s contents can turn over daily. Two cranes—each capable of hoisting up to 55,000 pounds—move car husks by the claw-full onto a conveyor belt, destined for annihilation.

A banged-up car slips off the end of an 8-foot-wide conveyor belt toward the shredder (hidden below steam at right). But this is no Staples-style paper slicer: It’s a mill of 14 hammers, each weighing 400 to 500 pounds and spinning at 500 rpm. The mallets quickly pulp engines, frames, and panels into metallic mulch.

Semis haul the metal 11 miles to the Eddy Current Plant, where 400 feet of belts and machines sort the refuse. This one, called a Kodiak, removes chunks of stainless steel. Like airport detectors, sensors spot disruptions the metal causes in an electromagnetic field. Mechanical flippers then flick it out of the flow.

A front-end loader heaps salvaged stainless into piles like this one, around 9 feet high. As the plant sifts its stream of automotive detritus, it creates similar mounds of aluminum and copper. The wire will require yet another processing step to tear the valuable metal loose from its plastic sheathing.

At Saginaw Metal Casting, GM turns 95 percent reclaimed aluminum, originating from scrappers like Padnos, into V6 engine components. The sandcastle-shaped objects arrayed at left? They’re the part of the molds that will form cylinders in an engine block. (And yes, they are made of sand.) It takes 19 pieces to fashion a complete block.

The furnace at Saginaw Metal Casting.

This furnace is the scorching heart of the foundry. Inside, two gas-fueled jets heat metal to 1,300 degrees. ­Thousand-​pound hunks of aluminum, or sows, sit in the 19-foot-wide maw and melt into a hot tub of molten metal. From here, the lava flows down a system of heated passageways to be cast.

One of more than 100 robots in the factory.

Meet the BFR. The “B” is for “big,” the “R” is for “robot,” and we can’t note what the “F” is for. This contraption—the biggest of more than 100 bots in the factory—casts one engine block per minute. It picks up a mold (foreground), fills it with liquid aluminum, and then sets it onto a conveyor to the basement to cool.

Humans and robots crank out 800 blocks a day. From Saginaw, they and other parts will head to a plant near Detroit, where technicians install pistons and fuel-management systems, among other final touches. Once complete, the engines will power Cadillacs, Chevys, and GMCs—until those cars, too, perish.