Future of the Car: The Electric-Car Cheat Sheet

A guide to the technologies, battery companies and carmakers that are bringing our electrified future here faster than you think. Plus: 7 promising electric cars on the horizon

In the past three years, the thought of companies like Chevrolet and Nissan selling lithium-ion-powered cars has gone from laughable to old news. Late this year, the plug-in Chevy Volt and pure-electric Nissan Leaf arrive. Carmakers from Ford to Toyota will follow in 2011 and 2012 with new electrified models of their own. In the beginning, the electric-car revolution probably won’t seem so revolutionary: a few thousand cars here and there. As long as automakers and battery companies keep pushing technology forward, however—by scaling up production and developing more-powerful ways to store electricity and power a car with it—the future for cars that plug into the wall will continue to brighten. Here’s where this emerging industry stands today. 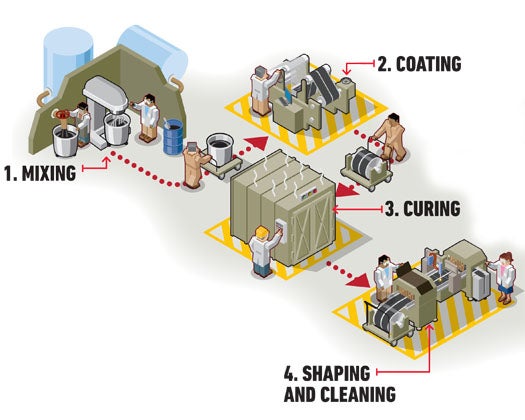 How Electric Car Batteries are Built

How Electric-Car Batteries Are Built

1. Mixing
Lithium-ion batteries—the dominant technology in forthcoming electric cars—begin when active battery ingredients are combined to form an electrode slurry. A liquid solvent, electrode powder (for the negative electrode, a form of carbon; for the positive, a form of lithium-containing metal oxide or phosphate) and a chemical binder are blended into a paste in what look like industrial pizza-dough mixers.

2. Coating
The coater, a machine reminiscent of a printing press, paints the electrode slurry onto long sheets of metal foil (copper for the negative, aluminum for the positive).

3. Curing
The freshly coated sheets pass through an oven for curing at 200ºF. The oven can be a bottleneck; its size and speed determine the rate of production.

4. Shaping and Cleaning
To make rectangular, “prismatic” batteries, machines chop the long reels of electrode material into paperback-size pieces, which are then compressed, brushed, and vacuumed.

5. Stacking
With a piece of porous separator material (it looks like white trash-bag plastic) between them, the positive and negative electrodes are sandwiched together into stacks. The separator prevents short-circuiting while still allowing the electrodes to exchange ions. The stacks go into plastic pouches that are then filled with liquid electrolyte and vacuum-sealed shut. The result is a cell, the building block of a battery.

6. Formation
After pre-charging (just enough juice to start the chemical reaction), the cell is opened, vented, and resealed. Next the cells are charged to 60 percent, then aged for 14 days. 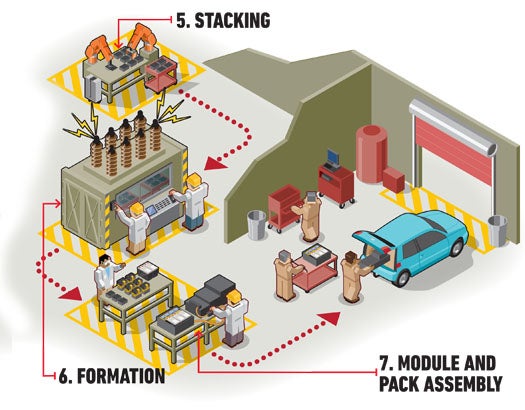 The Department of Energy spent $2.4 billion last year to launch an American EV-battery industry. These are the biggest winners

1. Johnson Controls
Through its partnership with the French battery company Saft, Johnson Controls builds lithium-ion batteries for Mercedes, BMW, Ford and others. A $299.2-million DOE grant goes toward a new factory in Holland, Michigan.

2. A123 Systems
A $249.1-million grant will help the Boston-area company build a cell factory near Detroit, from which it hopes to supply GM, Chrysler and others.

4. Compact Power
A $151.4-million grant will help build a Michigan factory to supply batteries for the Chevy Volt.

5. EnerDel
EnerDel, a supplier for Volvo and Think, is using its $118.5-million share to build a third EV-battery factory in Indianapolis. 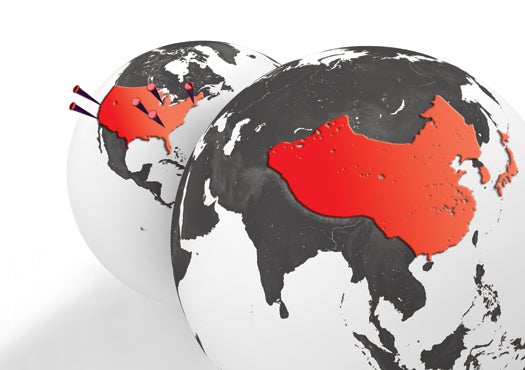 CHINA
The Chinese government has a goal: rule the global electric-car market by mid-decade. Of China’s 47 car companies, the Shenzhen-based BYD, which says it will begin selling its e6 EV in the U.S. this year, gets the most buzz. Fresh off a $230-million investment by Warren Buffett, BYD wants to surpass Toyota as the world’s largest car company by 2025, and it has an army of 30,000 workers living in high-rise dorms on its four-square-mile campus to make it happen.

JAPAN
Japanese companies have dominated lithium-ion manufacturing since Sony first commercialized the technology in 1991. Those companies have joined Mitsubishi, Nissan and Toyota in the scramble for a place in the new electric-car industry.

SOUTH KOREA
An American arm of the Korean company LG Chem will build batteries for the Chevy Volt. 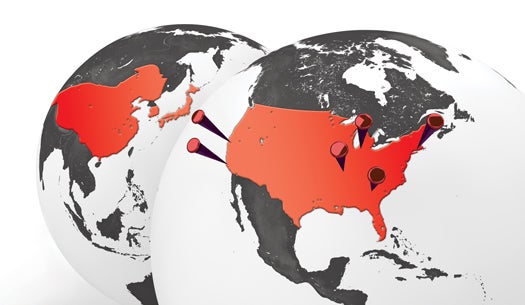 DETROIT
The Big Three automakers are still standing, and at least the two biggest among them, GM and Ford, are betting on electrification. In addition to the Chevy Volt, GM’s Cadillac has designed a plug-in concept that may become reality. Ford’s all-electric Focus and upcoming plug-in hybrid are due out in the next two years. At least four battery companies are building automotive-grade lithium-ion cell factories in Michigan, and GM’s new battery-pack assembly plant began producing Volt batteries in January.

INDIANAPOLIS
The CEO of the Indianapolis-based lithium-ion company EnerDel calls greater Indy the “Silicon Valley of the auto industry.” EnerDel, which makes EV batteries for Volvo, Think and others, is building a third factory here, and electric-drive-component suppliers such as Delphi, Allison Transmission and Remy are also in the area.

SMYRNA, TENNESSEE
Nissan will build up to 150,000 Leaf electric cars per year at its plant in Smyrna by 2012. It will make the batteries for those cars in a Tennessee factory it’s building with a $1.4-billion loan from the DOE.

BOSTON
The Massachusetts Institute of Technology is a hotbed of advanced energy-storage research, and its professors have a knack for turning lab work into companies. The best known is the lithium-ion start-up A123 Systems. A123 lost its bid to build batteries for the Chevy Volt, but it’s still involved in development projects with GM, and it’s selling batteries to Cessna (for starting jet engines), BAE Systems (for hybrid city buses in New York, Toronto and San Francisco), Fisker and electric utilities, which it supplies with shipping-container-size “grid batteries.” Boston Power, another battery start-up here, is developing EVs with Saab and the Swedish government. 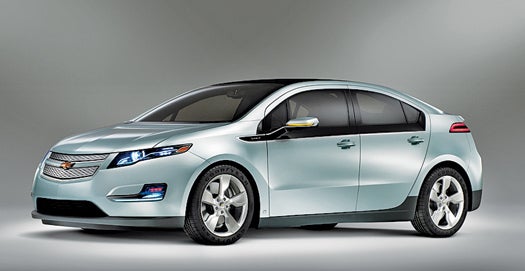 POWERTRAIN: Extended-range electric
RANGE: Up to 40 miles all-electric, then a backup gas engine kicks in
DUE OUT: November 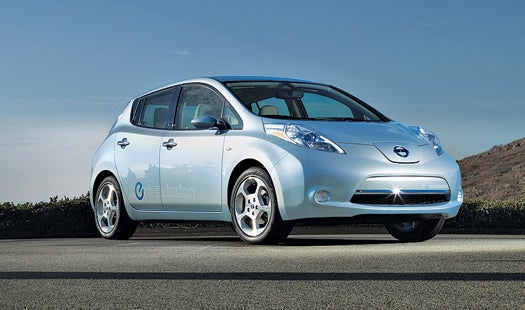 POWERTRAIN: Battery Electric
RANGE: Up to 100 miles per charge
DUE OUT: December 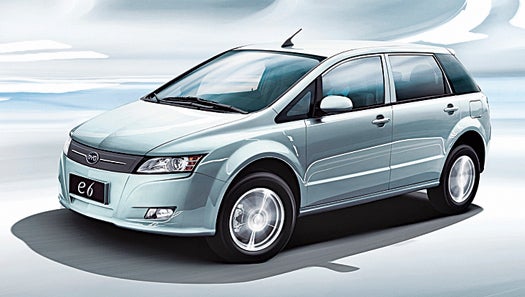 POWERTRAIN: Battery Electric
RANGE: Up to 205 miles per charge
DUE OUT: Late this year

POWERTRAIN: Battery Electric
RANGE: Up to 120 miles per charge
DUE OUT: Late this year 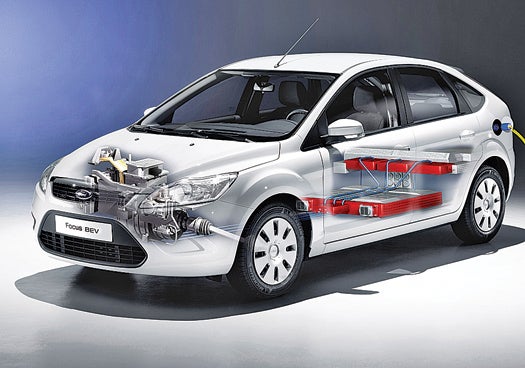 POWERTRAIN: Battery Electric
RANGE: Up to 100 miles per charge
DUE OUT: Next year 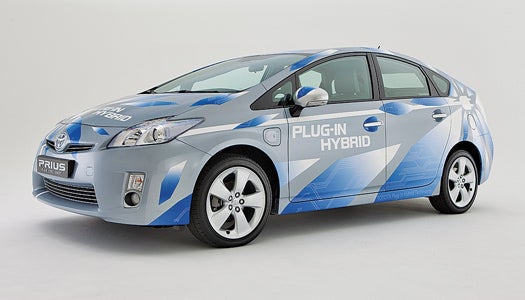 POWERTRAIN: Plug-in hybrid
RANGE: Up to 13 miles electric-only; after that, standard hybrid drive
DUE OUT: 150 cars in the u.s. this year 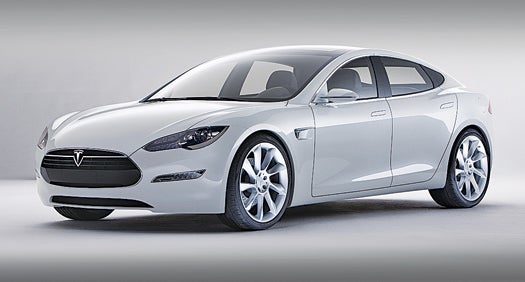