But catastrophic events like these are rarely as simple as the ABCs. 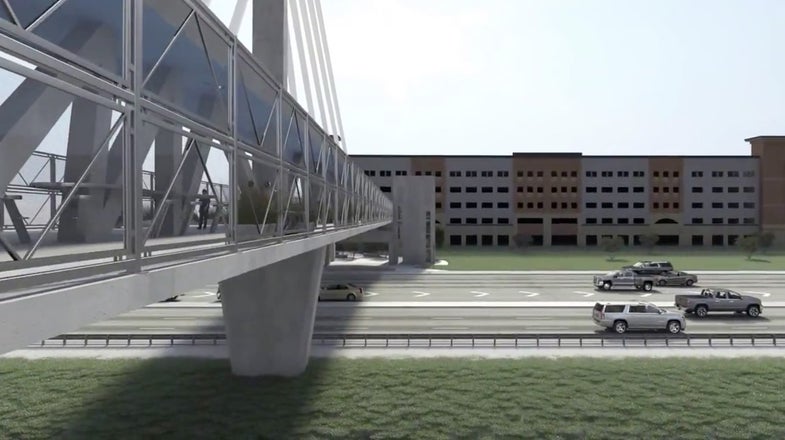 A 2016 rendering of the FIU pedestrian overpass, which collapsed this week, shortly after it was installed. FIU
SHARE

As cars drove along busy Southwest Eighth Street in Miami last week, they might have noticed a newly constructed bridge at Florida International University. On March 15, just five days after the bridge was erected, 950 tons of concrete gave way, killing six motorists.

Originally hailed as an engineering feat, the bridge was built using an increasingly popular construction method. But as investigators sift through the rubble in search of clues to the bridge’s collapse, the technologies behind the bridge are being scrutinized, too.

“Accelerated bridge construction,” or ABC, is a collection of strategies designed to reduce the time it takes to build a bridge. The philosophy measures its success in terms of time saved in the name of safety, reduced costs, and reduced traffic impacts.

The process isn’t actually that expedited: Rather than construct the bridge on site, it’s built elsewhere using a technology called pre-cast bridge construction. Then, it’s brought to the construction site and assembled quickly—sometimes in a matter of hours.

Mary Lou Ralls, a civil engineer and bridge expert, says that ABC has been used in thousands of bridges in the United States since the 1980s. Ralls is the director of technology transfer at FIU’s Accelerated Bridge Construction-University Transportation Center—a federally funded institution that, ironically, had turned the university itself into a symbol for ABC long before the bridge collapsed. It was founded by a group of bridge engineers eager to promote and research ABC reduce what it calls “the societal costs of bridge construction.”

Those costs include the amount of time it takes to build a bridge and the safety hazards faced by bridge workers. A work zone crash occurs once every five minutes in the United States, and transportation events account for 73 percent of work zone fatalities.

Traditionally, concrete bridges are poured and cast on the construction site, which is risky for workers and inconvenient for drivers. It’s the equivalent of making your own Lego blocks—the process can take months or years.

With ABC bridges, the concrete is poured and set off-site. Proponents say that allows for quality control and precision. Builders then pop the pieces together like store-bought Lego blocks near the site of the future bridge and swiftly installed.

After assembly, the FIU bridge was swung out over the street using a self-propelled modular transporter, a computer-controlled vehicle that can carry massive loads. It was then lowered onto supports on either side of the street. According to FIU, the structure was the largest pedestrian bridge ever to be moved using the technology.

When it was complete, the FIU bridge was supposed to look like a cable-stayed bridge—a more modern cousin of the traditional suspension bridge that distributes its load along a set of cables affixed to a single tower. However, the cables (which were never affixed) were only a secondary support element. The unfinished structure was actually a truss bridge. When you think of the bridge type, you probably envision a metal structure—usually used on railroad bridges—that relies on triangular trusses that bear the load of the bridge.

In this case, however, the bridge had concrete trusses. That’s unusual, says bridge expert John J. Myers, a structural engineering professor at Missouri University of Science and Technology. “Trusses are more commonly made of steel elements,” he says. But since concrete is impervious to corrosion and requires less maintenance than steel, he adds, it’s become increasingly popular in all bridge construction in the last few decades.

Most modern concrete is reinforced with metal, and the FIU bridge was no exception. Inside, it had steel tendons that were being tightened on the day of the collapse. Tensioning work is delicate work, says Myers. “You could create a torsion or eccentricity in the structure,” he says. But though over-tightened cables can lead to dangerous twisting or cracking, it’s unclear if that’s what happened in this case.

On March 13, the lead engineer on the bridge project left a voicemail with the Florida Department of Transportation notifying the agency of cracking on the north end of the span. Tragically, the message wasn’t retrieved until after the collapse. And at a meeting the day before the bridge fell, said FDOT in a statement, the agency was not notified of any life-safety issues.

So what caused the collapse—the design, the construction, or the ABC technique? There won’t be answers until the National Transportation Safety Board, which investigates civil transportation accidents, completes its investigation. But, Myers says, “something triggered it”—be it job site processes, design or manufacturing issues, or a combination. “There’s something there.” FIGG Bridge Engineers, Inc., the designer of the bridge, says it’s cooperating with authorities. “In our 40-year history, nothing like this has ever happened before,” the firm said in a release.

Before the collapse, the bridge was hailed not just for its innovation, but for its potential economic and social benefits. It was intended to link the town of Sweetwater with the university and make it safer to get across the busy thoroughfare. The project received $11.4 million in funding from the U.S. Department of Transportation in 2013.

“We are filled with pride and satisfaction at seeing this engineering feat come to life,” said FIU president Mark B. Rosenberg after the bridge swung into place on March 10. Just a week later, he spoke to the FIU community via a more sober press statement. “Our hearts break for the victims of the bridge collapse,” Rosenberg said. “Lives have been lost. Futures and families shattered. …It will take time for our community to heal.”

The same day, the NTSB tweeted that its investigators are on the scene. They’ll stay there for several days as they gather additional evidence and conduct interviews. Meanwhile, Miami will continue to mourn—and ask questions of its own about the catastrophic collapse.