Your trunk just became your mailbox. 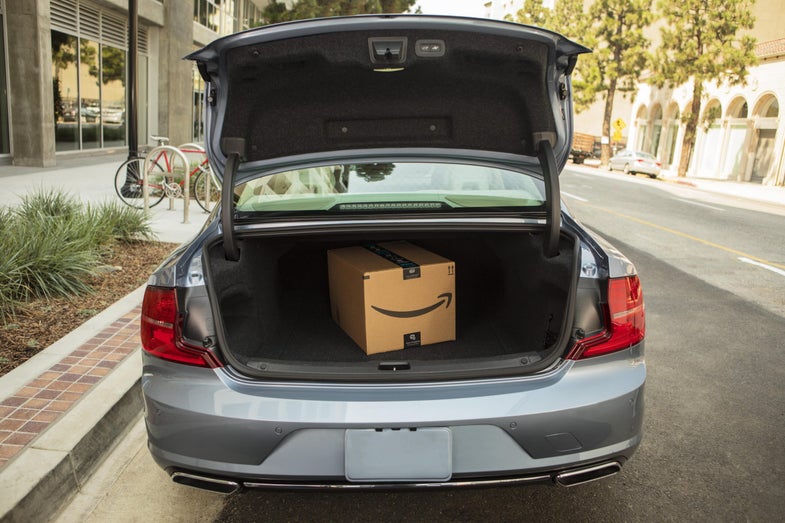 Order something from Amazon, and if the right conditions align—you own a recent Chevy or Volvo, for example—a delivery person could find your car, remotely unlock it, and plop your package inside. The new service is part of a system called Amazon Key, which already allowed customers with a smart lock and security camera to receive deliveries inside their homes. Now, the same idea extends to your home on wheels.

It’s easy to see why the straight-to-trunk service would appeal to both Amazon and its customers. Would-be package thieves can’t easily nab a box out of your car, and the system can deepen a consumer’s relationship with Amazon. An office worker who orders something could have the item placed directly in their vehicle in the lot outside, and have it skip the trip through the mailroom to their cubicle, for example. Someone on a road trip could receive their bulk beef jerky order straight to their car parked in front of the hotel.

But it also highlights how important it is for a contemporary car to not just be four wheels, an engine, and some airbags, but a connected aspect of people’s digital lives. That’s because Amazon’s car-delivery feature only works with modern General Motors vehicles that have OnStar enabled, or Volvos with the company’s On Call service. Connectivity is necessary because Amazon Key needs to be able to find your car and then remotely unlock it to drop off your package.

For automakers, in-car delivery “accelerates the urge to get all of these cars connected to the internet,” says James McQuivey, an analyst with Forrester Research and a close Amazon watcher.

That, and it provides another reason for carmakers to continue the trend of adding sensors like cameras, to possibly someday record those deliveries. Right now, customers who get a package delivered inside their home can later watch of a video clip of the mundane event, but not so with the car delivery. But as cars incorporate more cameras—an important technology on vehicles for reasons beyond just package deliveries—that could change. (An Amazon spokesperson declined to speculate on whether or not they would someday add this feature.)

Services like the trunk-delivery service, plus getting Alexa, Amazon’s voice assistant, into cars, can help the Seattle behemoth connect with carmakers. And the benefit goes both ways. “This actually fits the carmaker’s strategy, right now, too,” McQuivey says. “It makes them relevant.” A connected car that supports the package-delivery feature may be more enticing to consumers than one that does not.

And working with Amazon—whether it’s integrating Alexa into a vehicle or cooperating with them, as GM and Volvo have done, for the in-trunk delivery trick—gives Amazon a chance to do what it does best. “These car companies are never going to be developing software as quickly as companies like Amazon,” McQuivey says.

Ford, for example, offers access to Alexa already. That happens via your smartphone’s connection to the cell network—you must connect your phone to the vehicle. And the company says that 100 percent of its new vehicles in the U.S and China will have a cellular connection by 2019, a system that allows a customer to start it remotely via a voice command to Alexa from their home.

“The environment’s changing,” says Doug VanDagens, Ford’s global director of connected vehicle platforms and products, referring to connected vehicles, sensors like cameras on them, and the new Amazon service. “We see the vast potential.”

As for Amazon, VanDagens notes that Ford speaks with the company weekly, but declined to say if Ford would also be offering the trunk-delivery service. “It’s probably one the most productive partner relationships that we have,” he says. “There are definitively future products being planned, but we just can’t tell you which ones.”

“We have a regular call with them to develop new technology,” he adds.

And a Toyota representative says they’re also interested in the trunk-delivery service: “We think it’s a feature that, based on what we know about our consumers, is something that they’re going to want.”