The Swedish automaker's next-gen EVs could feel like a living room on wheels. 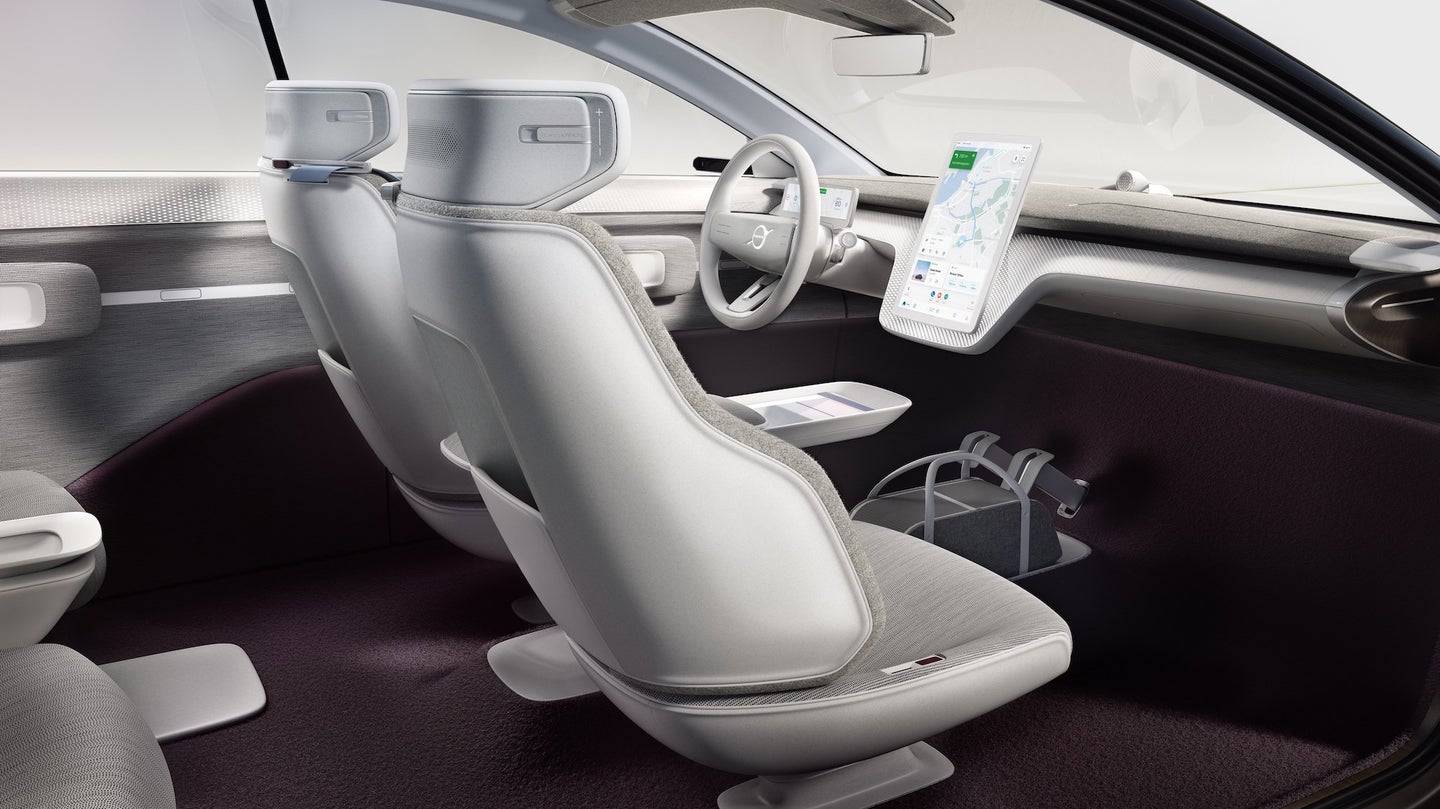 Electric cars are here, and more are coming—a fact that has sparked competition not seen in the auto industry for decades. Some manufacturers are focused on achieving the best overall range, while others are looking to squeeze every drop of performance from their shiny new electric powertrains. And then there’s Volvo, which has instead decided to focus on the overall comfort factor of driving, and is working to create an experience that makes being in the car feel as if you’re still in your living room.

On June 30, the Swedish automaker held a live event in its hometown of Gothenburg, Sweden to showcase its upcoming engineering marvels. Dubbed Volvo’s first-ever “Tech Moment,” the automaker used the time to show how its design principles and focus on safety would shape new cars.

Presently, Volvo has only one fully-electric car on the road in the United States: the XC40 Recharge. Soon it will add the C40 Recharge crossover to its portfolio as well. In the meantime, the only other battery-electric option comes from Volvo’s spin-off brand, Polestar, which offers the Polestar 2, a premium sedan built on the same shared Compact Modular Architecture as the XC40. (Hybrids are a different story. Volvo offers seven total plug-in hybrid vehicles, bridging the gap between gasoline and pure electric.)

To show off its new tech in one place, Volvo put together a vehicle it calls the “Concept Recharge” which it hails as the “manifesto for the next generation of all-electric Volvos.”

Its sleek and modern SUV-sized body is deliberately minimalistic, featuring large areas of shaped metal with the use of smartly creased corners and sparse body lines to break up the monotony. A high seating position with sloping hood and reshaped roof is chosen for maximum visibility on the road without compromising on range.

While onlookers can spend all day gawking at the SUV’s sleek exterior (and those magnificent “Thor’s Hammer” headlights—yes, that’s actually what Volvo calls them), the real magic starts with the new electric powertrain.

Volvo’s upcoming second-generation EV platform completely rethinks how Volvo builds electric cars, starting with the engineering of its battery packs. Overall energy density is increased by up to 50 percent compared to the battery tech found in its vehicles on the road today, allowing for significantly more range per charge, and decreasing the time spent plugged-in by nearly half.

As an added benefit, the redesigned pack allowed engineers to extend the vehicle’s wheelbase, minimize overhang past the front and rear wheels, as well as flatten its floors—meaning that the new powertrain is partly to thank for the sheer utility of the Concept Recharge’s ultra-spacious interior.

Prior to the Tech Moment presentation, Volvo had already committed to becoming an all-electric brand. The automaker says that by 2030 its entire fleet will be electrified thanks to its recent partnership with Swedish battery manufacturer, Northvolt.

[RELATED: Ford’s 2022 Maverick pickup will rival the fuel efficiency of a Honda Civic]

Volvo describes its future cockpit as a “Scandinavian living room.” Minimalistic design elements could make it feel like sitting inside of an Ikea on wheels, but the real goal is to embrace a feeling of serenity while in motion—like you never left the comfort of your own home.

The stark interior is also designed to promote distraction-free driving. Flowing lines and sensible controls help focus the driver’s attention on the road. Even the layout of the infotainment system and new digital gauge cluster follow the same intuitive philosophy, providing a setup that focuses on what the driver needs to see at any given moment: navigation, surrounding traffic, recently used controls, and more.

The living room feel will be accentuated by the inclusion of what Volvo describes as “unsupervised driving.”

Safety has always been a top priority for Volvo. In fact, it was Volvo engineer Nils Bohlin that first invented the three-point seat belt in 1959— it was such an important advancement in vehicle safety that Volvo opened the patent for any automaker to use in its vehicles. Now, more than 60 years later, safety continues to be Volvo’s lodestar, but instead of using seatbelts and airbags to reduce fatalities, the focus has shifted to using technology as a tool in the ultimate goal of an accident-free future.

By using a roof-mounted Light Detection and Ranging (LiDAR) unit along with the vehicle’s suite of data-gathering sensors, Volvo claims its future vehicles will allow for partial automation that extends past the typical lane-centering and other cruise-control-type features seen in most modern vehicles today. The automaker’s engineers attest that drivers will eventually be able to take their hands and eyes off the road, letting the car drive itself—under certain conditions, that is. Volvo says its rollout of this feature will be slow and steady, beginning with limited highways signed-off by the team building out the tech.

It’s worth noting that other automakers have made similar pledges as well. Tesla is perhaps the most notable of the bunch, with its eventual promise of Full Self-Driving, though its approach controversially uses vision-based autonomy instead of including other sensors, like LiDAR. Either way, don’t expect any new car to hop on the highway and drive itself anytime soon.

[RELATED: How Tesla is using a supercomputer to train its self-driving tech]

Volvo plans to begin gradually rolling out some of its new features throughout the decade, beginning with the inclusion of its autonomy hardware suite in the upcoming 2022 Volvo XC90 flagship SUV. However, exactly how much of its futuristic vision will make it to production is anybody’s guess.

For example, the LiDAR hardware from the XC90 will trickle down to all of its future vehicles as standard equipment, but it doesn’t mean that the rollout of unsupervised driving will be fast, free, or even without a hitch. Plus, certain other design elements of the concept (like the center-opening coach doors, which have historically been known as “suicide doors,” for example) feel like a fever dream at best given Volvo’s commitment to safety.

Even so, Volvo has always been an automaker that tests the limits of design, especially inside of the car. The company is extremely proud of its rich design heritage, and has committed to completely redesigning the user experience within the cabin.

While the exact design of each car will likely be unique and tailored to its customers, it’s quite clear that Volvo is aiming to make the entire driving experience just as enjoyable as sitting in your favorite recliner and watching a movie—and maybe when unsupervised driving is available, you actually will.