When parachutes and airbags won’t do the trick, you’ve got to land like a hovercraft, lowering precious cargo from a... 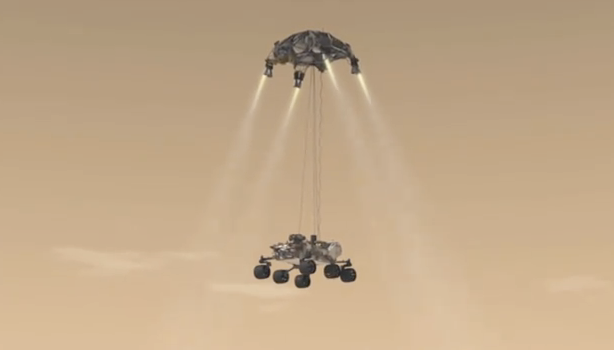 When parachutes and airbags won’t do the trick, you’ve got to land like a hovercraft, lowering precious cargo from a flying crane.

Check out this amazing new animation of NASA’s new Mars rover, the car-sized Mars Science Laboratory, on its harrowing journey to the red planet.

The rover, also called Curiosity, is too big to land bouncing along airbags a la its predecessors, Spirit and Opportunity. And Mars doesn’t have enough atmosphere for a parachute to slow it sufficiently. So engineers at the Jet Propulsion Laboratory came up with this hybrid approach, involving a rocket-slowed descent and a “sky crane.”

Curiosity will launch this fall and spend the next eight months traveling to Mars. It will enter the Martian atmosphere careening at 13,000 miles per hour, where its Apollo-esque heat shield will protect it from burning up. A parachute slows it down a bit before the rocket-powered descent stage. Then the sky crane lowers the rover, something that has never been done before …. just watch the super-realistic animation below.

Spirit and Opportunity were bouncing around like glorified beach balls when they landed, which was somewhat terrifying for any Mars enthusiast, let alone the rover teams at NASA and affiliated institutions. But a sky crane? It’s hard to imagine the tension. Here’s hoping it all goes as smoothly as the video.