Russia, NASA to Meet This Month to Discuss Collaboration on Nuclear-Powered Spacecraft

In the last century, Russia and the United States engaged competitively in both a space race and a nuclear technology... 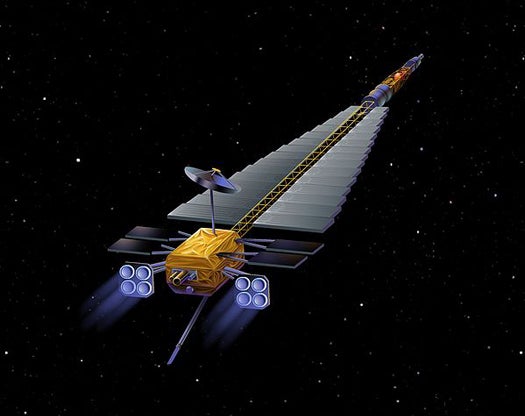 In the last century, Russia and the United States engaged competitively in both a space race and a nuclear technology race. In this century, it appears the two are considering collaborating in turning the fruits of those Cold War showdowns into workable technology that could expand spaceflight operations beyond Earth orbit. On April 15, Russia and NASA (and a handful of other “nuclear club” countries) will convene to talk about building a next-gen, nuclear powered spaceship.

The head of Roscosmos–NASA’s Russian counterpart–told Russia’s state-owned newswire that states with a high degree of nuclear reactor technology will take part in the talks. So while Roscosmos and NASA are the principal space agencies involved, France, Germany, China, and Japan were also mentioned as potential partners in the report.

Why now? Roscosmos, it turns out, plans to complete a new design for a nuclear spacecraft engine by next year. But while it has big plans for its nuclear technology, it needs some $600 million to build the thing. A good deal of that will likely come from Rosatom, Russia’s state nuclear agency. But clearly Roscosmos also seeks international involvement, be it financial or technical.

Nuclear tech has long been envisioned as the enabling technology that will lead to deep space travel, but there is not yet consensus on exactly how to implement it. Russia has previously described its “engine” as a “megawatt-class nuclear space power system.” That means it might be of the more conventional electricity-providing variety that would power ion engines or some such, though it could also use reactor heat to eject reaction mass, meaning it would provide thrust as well as electricity.

It’s unclear if the Russians will make public their ongoing design April 15th, or exactly what Roscosmos expects to come of the talks. If it turns out Russia and the U.S. sign an unprecedented agreement to explore far-off star systems together riding a jointly-built nuclear spacecraft, expect to read about it here. But don’t put your money on it just yet.