Two White Dwarfs Orbit Each Other At 1,000,000 MPH, Will Soon Merge to Create a New Star 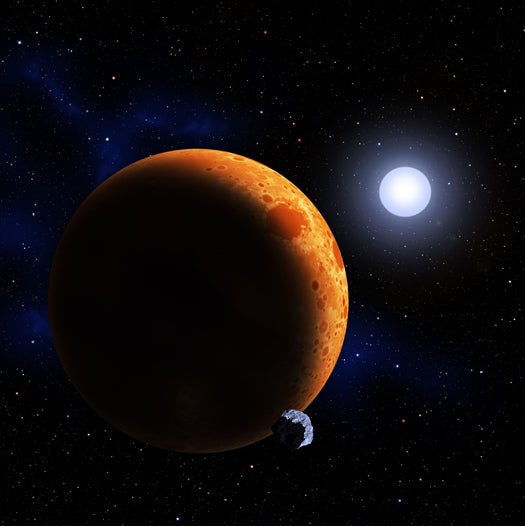 Researchers at Harvard-Smithsonian Center for Astrophysics love a good pair of merging white dwarfs, but their most recent discovery of an orbiting pair is interesting beyond just being a galactic rarity. This new pair is the fastest orbiting pair of white dwarfs ever seen, completing an orbit every 39 minutes. What’s more, in several million years their orbits will decay to the point that they collide, merge, and are reborn as a single star.

White dwarfs are essentially dead stars–a bunch of mass packed into a small space, they are the remnants of stars that weren’t massive enough to go supernovae. But while stars of this size are prevalent in the Milky Way, of the 100 billion out there only a few end up in merging white dwarf systems. And this latest discovery is the first that is expected to merge, reignite the helium fusion process, and emerge as a single, reborn star.

That won’t happen for another 37 million years. In the meantime, this odd couple will keep whipping around one another at a mind-numbing 1 million miles per hour at a distance of roughly 140,000 miles apart–closer than the distance between Earth and the Moon.

It’s that high speed dance that will eventually unite and resurrect the two stars as one; they are moving so quickly in tandem that they are disrupting the space-time continuum (no joke), throwing off rippling gravitational waves that carry away orbital energy. That causes the stars to slowly spiral closer together. Give it a few dozen million years, and the two will spawn a brand new star that will live another lifetime. Call it a cosmic love story with a happy ending.