Okay, so it’s not as warm and fuzzy as the Smithsonian National Zoo’s lion cub cam. But NASA’s new webcam... 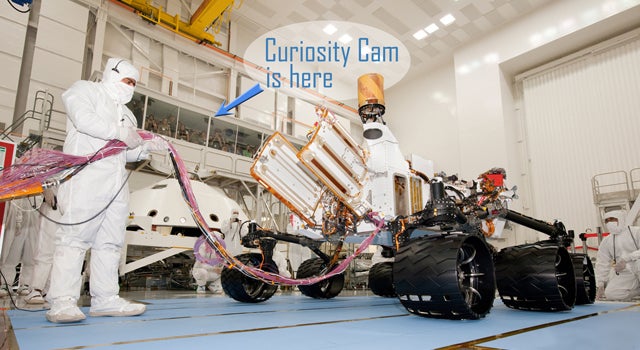 Okay, so it’s not as warm and fuzzy as the Smithsonian National Zoo’s lion cub cam. But NASA’s new webcam is pretty neat — you can watch a spacecraft being born.

NASA’s Mars Science Laboratory, or Curiosity to its friends, is taking shape inside a clean room at the Jet Propulsion Laboratory. NASA engineers want the public to see their handiwork as they assemble the most ambitious interplanetary explorer ever designed. Watch it here on Ustream.

We already watched as Curiosity took its first baby steps this summer; now you can follow along live as it is put together, piece by piece. Last week, NASA set up a webcam, albeit without audio, from a viewing gallery above the clean room floor. Viewers can watch as new pieces are added — on Oct. 26, workers attached Curiosity’s 7-foot-long robotic arm.

Every so often, Curiosity engineers will host live web chats to answer questions about the rover and its science instruments, according to JPL. Curiosity is designed to go farther than its predecessors, Spirit and Opportunity, and its instruments will hunt for signs of life.

The car-sized rover is scheduled to launch from Kennedy Space Center a little more than a year from now, and it will arrive on Mars in August 2012, according to NASA. Lots more work must be done before that — to that end, bunny-suited engineers start working in the clean room at 8 a.m. Pacific time Monday through Friday.

Sometimes the rover might be in a different area where it can’t be seen, and NASA warns that the webcam might shut off occasionally. But the camera has a pretty wide view, so odds are you’ll be able to watch as engineers do who-knows-what.