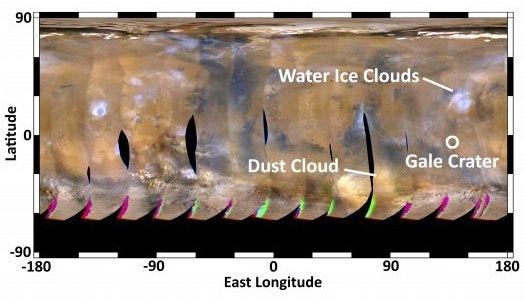 PASADENA, Calif. — About 34 hours from the Mars rover Curiosity’s landing (scheduled for 01:31 am Eastern time on Monday), NASA brought us the latest weather forecast from the surface — dry and cold, with a slight chance of dust. Slight is good.

Earlier this week, the Mars Reconnaissance Orbiter spotted a dust storm south of Gale Crater, the rover’s targeted landing site. While dust storms have posed problems for previous generations of rovers, the Mars Science Laboratory spacecraft and Curiosity rover is designed to handle dust and winds, so a light storm wouldn’t have been a huge problem. But it could have caused added turbulence, interfering with the spacecraft’s guided entry and landing. Curiosity could still land safely, though it may set its wheels down with a little less accuracy than managers want.

But the latest imagery from the Mars orbiters shows the dust storm clearing, said Ashwin Vasavada, deputy project scientist for the mission.

“Fortunately, Mars is playing nice, and we’re going to have good conditions for Sunday,” Vasavada said.

Imagine a flattened Earth map, with North America on the left. Gale Crater would be in Indonesia, if that map were showing Mars. This region experiences some dust storms during this time of year, but conditions right now are pretty calm. Two Mars years ago, back in October 2008, it wasn’t calm — spring came early to this hemisphere of Mars, and conditions were ripe for stormy weather. NASA engineers used climate observations from that era to gauge what Curiosity could be up against.

The rover has been flying in autonomous mode since Monday, and it’s on its own for landing. If any dust storms should appear, the spacecraft will have to deal with them as best it can. Stay tuned for more about just how Curiosity will do that.