We knew this day was coming, but it’s still never easy when days like today finally come: After more than... 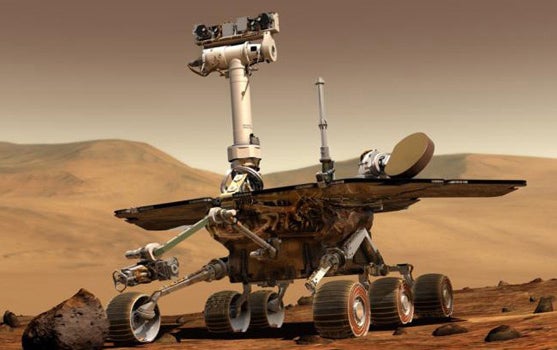 We knew this day was coming, but it’s still never easy when days like today finally come: After more than a year of silence, NASA is ending its attempts to contact its Spirit rover, which has been dormant on the surface of Mars since its last communication with handlers on Earth since March 22, 2010.

Of course, Spirit lived a long and fruitful life on the Red Planet, something like 25 times longer than it was supposed to. Designed for a three month mission that began in 2004, Spirit logged more than six years on the job. During that time it beamed back 127,000 raw images of the Martian surface, including 16 color, 360-degree panoramas. It also drilled into 15 rock targets and scoured 92 more, gathering invaluable data on the planet’s geology.

Spirit also had a traveler’s soul, crossing the Columbia Hills and putting 4.8 miles on the odometer while crossing the Gusev Crater alone–part of it while driving backwards when one of its wheels ceased functioning in 2006. Martian winter after harsh Martian winter, Spirit returned to the job.

Cause of death: NASA engineers will likely never know for sure, but while Spirit survived the Martian winter three times previously, the most recent was particularly harsh, offering very little solar energy with which to run its survival heaters. As such, any number of critical systems could have been damaged by the cold. Engineers held out hope that the spring thaw might reawaken Spirit, but with no word yet NASA must reorient its Mars communications resources to support the upcoming launch of NASA’s next-gen rover, Curiosity (aka the Mars Science Laboratory), later this year.

Spirit is survived by its sister rover, Opportunity, which is on its way to the Endeavour crater–and still contributing valuable Mars data–on the other side of the planet.