After the thrilling landing, where did all the pieces wind up? 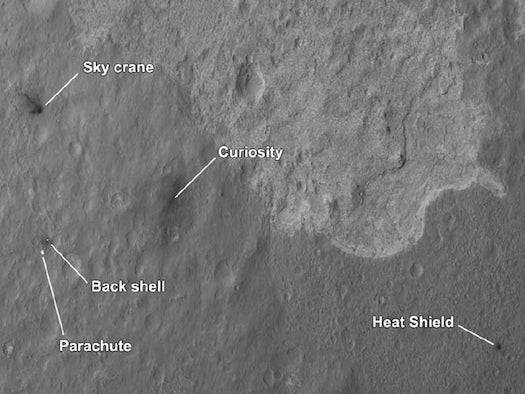 Getting Mars rover Curiosity onto the surface of the planet had to be coordinated between many mechanical parts: a heat shield to protect it, a supersonic parachute to soften the landing, and a sky crane to set it down on Mars. It went smoothly for the rover, and now NASA has released another photo, which they’ve nicknamed a “crime scene” shot, showing what happened to the bit players in the landing, too.

The photo, taken by the Mars Reconnoissance Orbiter, shows the view from 185 miles up. The distance between Curiosity in the photo and the sky crane is about 650 meters, the parachute is about 615 meters away, and the heat shield is a full 1,200 meters away. The dark areas are where dust was disturbed during the landing.