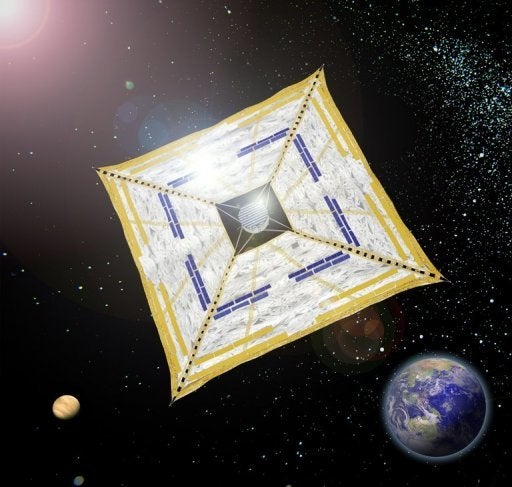 Never mind using the solar wind to power spacecraft — that’s old hat. Scientists at Washington State University want to use solar wind to power the entire world. A humongous solar sail could be used to harvest the power of solar winds, generating 1 billion billion gigawatts of electricity. The problem is figuring out how to get the power back to Earth.

A solar wind power satellite, or a Dyson-Harrop satellite, after the scientists who invented it, would provide 100 billion times as much power as the Earth currently uses, as Discovery News points out. Researchers from Washington State University published a paper describing the system in the International Journal of Astrobiology.

It involves a .4-inch-wide copper wire pointed at the sun, and attached to a solar sail. The wire — which can range in length from 980 feet to more than half a mile — would generate a magnetic field that would capture electrons from the solar wind. The particles would be funneled into a spherical receiver, which produces a current.

Some of this electricity would be used to power the electron-harvesting magnetic field. The rest would power an infrared laser beam, which would be pointed at collectors on space stations, power bases or Earth. Satellites could be placed anywhere in the solar system, and networks of satellites could combine to generate terawatts of power, the researchers say.

The system would be cheaper than installing solar panels in space, because copper is cheaper than photovoltaic cells, according to International Business Times.

The main problem is getting all this energy back to the planet. Satellites would have to sail tens of millions of miles away from Earth in order to capture enough power, but even the most powerful laser beams would scatter over such great distances. The laser would spread to thousands of miles wide, according to John Mankins, president of solar power consulting firm Artemis Innovation. He is quoted in New Scientist saying you would need “stupendously huge optics, such as a virtually perfect lens between maybe 10 to 100 kilometers (6.2 to 62 miles) across,” to capture the laser.

Researchers would have to design a more focused laser before solar wind satellites could be deployed, acknowledges to Dirk Schulze-Makuch, a co-author of the paper.

Still, the idea seems worth exploring — the solar wind is a vast source of energy, so why not try to capture some of it? If it could solve the world’s energy problems for good, it’s worth a closer look.