Why I Eat Lion and Other Exotic Meats

Why do people seek out yaks, bears, and other exotic eatables? An enthusiast tells why, and how 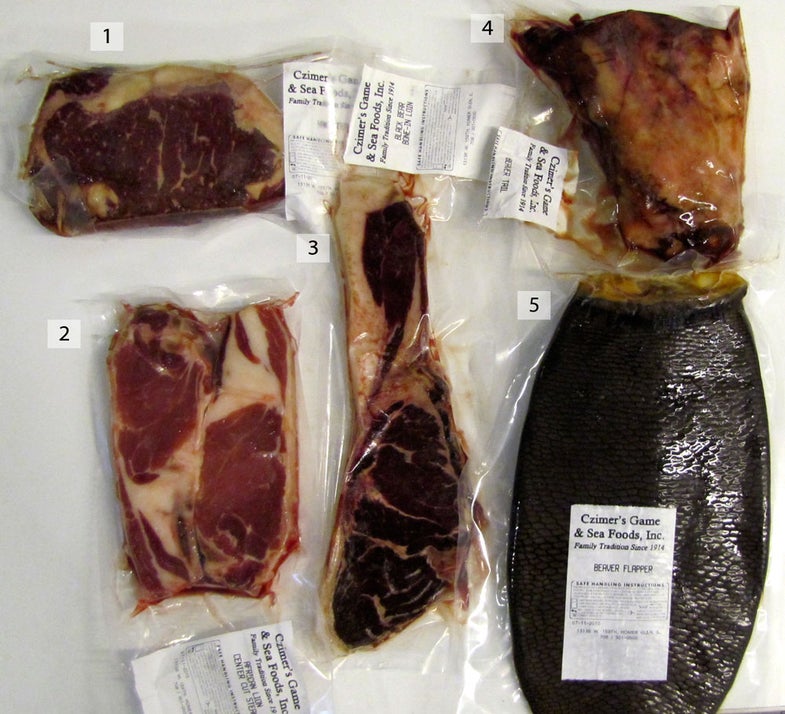 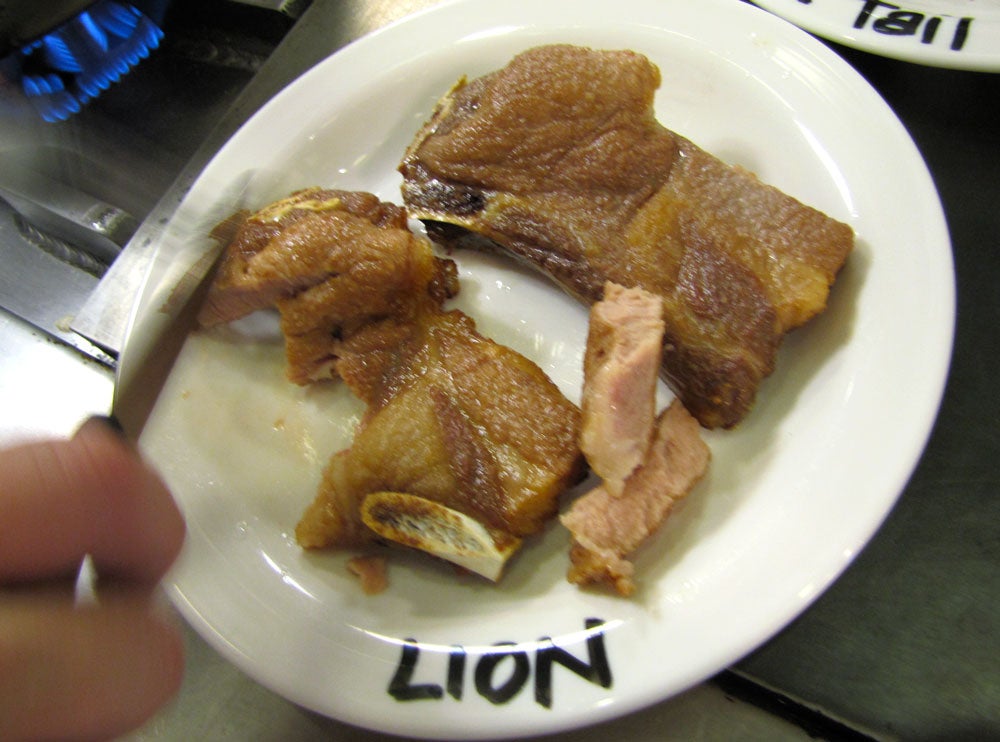 In the November issue, we looked at how scientists are using DNA analysis to track down endangered species that are being hunted for food. Here, Dave Arnold talks about why some people prefer exotic meats.

For the most part, Americans are obsessed with tenderness, and favor mild-flavored meat. We eat a fairly small number of animals, almost all of them slaughtered young, when their meat is at its least flavorful. Fortunately, some of us are starting to realize that meat can be much more interesting. As the food revolution continues to gain traction, our ancestral lust for robust, unusual meats is starting to spark and reawaken.

America was once the premier place to eat strange animals. We were world-renowned for the quantity, quality, and variety of our game. We ate wild animals, farmed animals, young animals, old animals. If it moved, we ate it (exception: eagles). 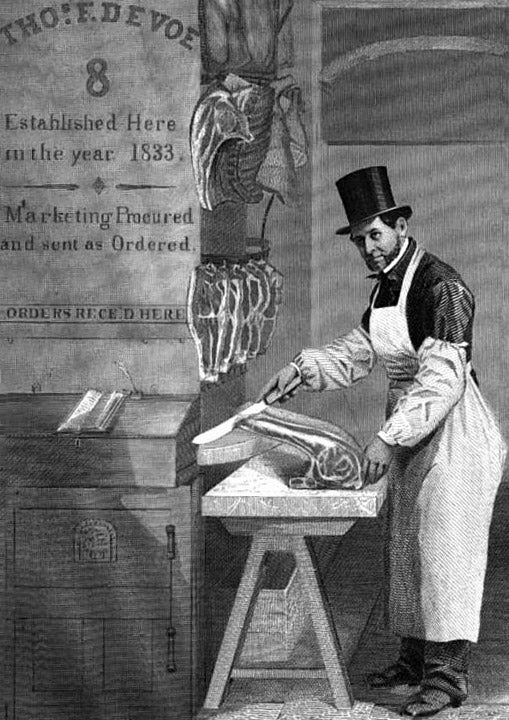 For an eye-opening reference, see Thomas DeVoe’s 1867 book The Market Assistant (free on Google books), which describes pretty much every food available in a large 19th century American market. The author was a butcher at Jefferson Market in New York both before and after the Civil War; you can see him on the frontispiece cutting meat while sporting a stovepipe hat and cravat. The wildfowl section of the book alone runs to 35 pages and includes cuckoo birds and woodpeckers. A trip to the market would have been like a trip to a natural history museum.

For the last several generations our focus as a culture has not been on taste. Lamb, for example, is typically slaughtered at less than one year old. Mutton, its full-flavored adult counterpart, was a culinary staple for millennia, but has virtually disappeared from our plates in the last hundred years.

Where To Score Exotic Meats

Acquiring and cooking interesting meats is still possible, but it takes a little know-how. Though hunters have regular access to a wide variety of wild meats, U.S. regulations prohibit selling their kills for eating. Unless you or your best friend is a hunter, you’ll need some wild-meat workarounds.

Game animals may be raised as farm animals, slaughtered under USDA inspection, and then sold. You can get yak meat this way, and it is super delicious — rich and gamey, like a cross between beef and duck. Many farmed “wild” animals, however, don’t taste the same as their truly wild counterparts because their diets and exercise regimens are different. Oddly, wild animals shot in the United Kingdom and processed under UK hygiene rules are legal to import into the US. You can order up some delicious wild grouse, one of the most highly prized of all game birds, under these laws — though at a hefty price. You can also legally acquire wild meat from a fur trapper, who is permitted to trap live animals for their fur, slaughter them at USDA approved facilities, and sell the meat. You can order beaver thanks to these laws; the meat has a unique woodsy taste (no joke).

The saddest route to exotic meats is eating the cast-offs of the exotic animal business. Bears and lions are raised by big game dealers for circuses, exotic pet enthusiasts and zoos. When these animals are too old to breed, or their owners discard them, they are slaughtered for their fur and the meat is sold to dealers. Note that it is never legal to slaughter an endangered animal. 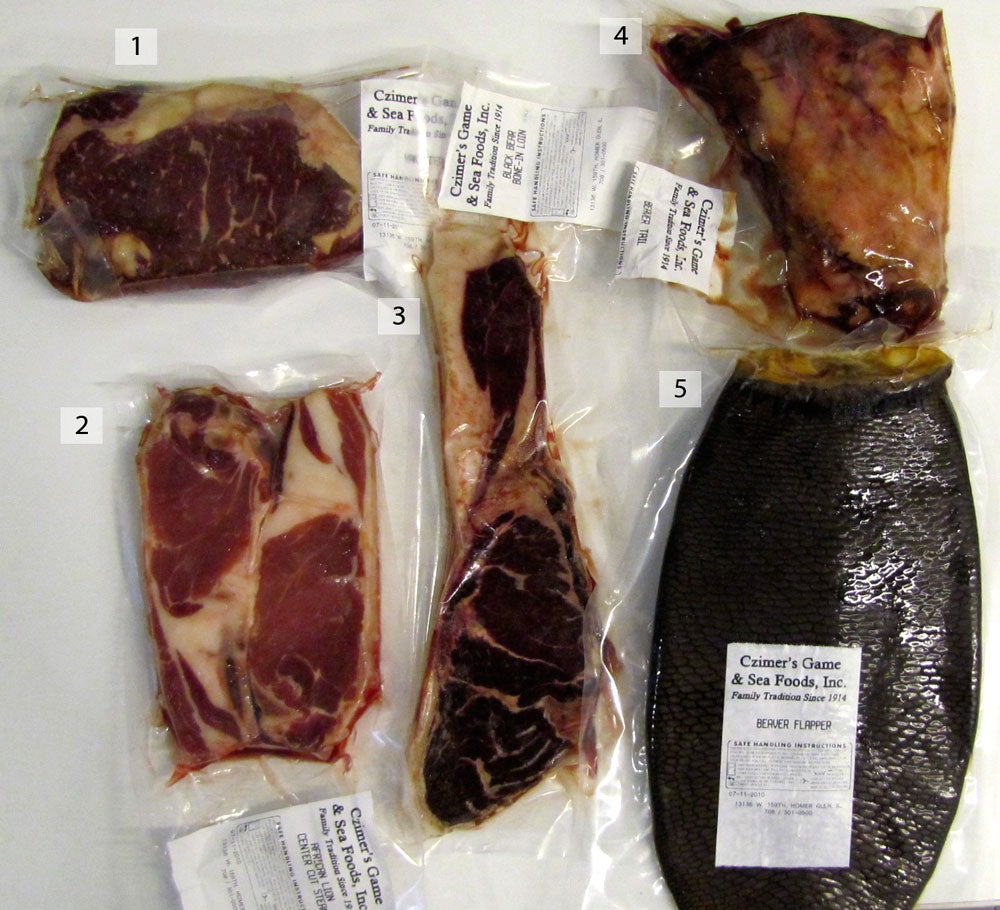 An Order of Meat

What To Do With Them

Getting your exotic meat is only half the problem. Because many of these animals are older and their meat is tougher and less marbled than grain-finished beef, cooks often don’t know how to prepare them properly. Game meat is often relegated to highly sauced preparations or stews, or served as tiny chunks of meat fried in a heavy batter. I’ve been served alligator seven times and I still don’t know what it tastes like. Hunters’ cookbooks offer suggestions, but most of them aren’t written by chefs and they tend to recommend brutally overcooking the meat. A notable exception to the typical game book is Chef John Folse’s groundbreaking work After the Hunt, his 854-page paean to the cookery of Louisiana’s game.

There isn’t much connective tissue in your average steak, and that’s why they taste great grilled, broiled, or pan-fried. Game meats, on the other hand, are inherently tougher and don’t become tender when grilled. Additionally, the fat in a steak lubricates our mouth as we chew and prevents steaks and chops from tasting dry; this fat isn’t prevalent in game meats. It is hard to quick-cook game meats properly. The normal alternative to quick-cooking — slow cooking — isn’t necessarily the solution either. Traditional braised meats contain lots of connective tissue. As meat is braised, it becomes juicy as its connective tissue is rendered into unctuous gelatin. Steak cuts of game animals don’t have enough connective tissue to get juicy and tender from the rendered gelatin.

In short: there is no good traditional way to cook these meats. A typical compromise: slice the meat very thin and cook it over very high heat; you get a flavorful crust and the pieces are so thin that you can’t tell how tough they are. The real solution is low-temperature cooking, which has revolutionized the way many chefs cook, and has the potential to revolutionize game cooking as well. In traditional cooking, high temperatures are used: we use a 400-degree oven to cook a piece of meat to an internal temperature of 135°.

In low-temperature cooking, we use a piece of equipment called an immersion circulator to precisely cook and hold a piece of meat at exactly the temperature we want (for more on sous vide cooking, see here). Using the immersion circulator and a Zip-loc bag with butter, I can hold a yak steak at exactly 133°F for hours and hours, without overcooking the meat. After many hours at these low temperatures, the connective tissue breaks down and the meat becomes tender. Because it hasn’t been overcooked in the first place, the meat isn’t dry and doesn’t require a lot of intramuscular fat to seem juicy.

Until recently, immersion circulators and low-temperature cooking were the exclusive purview of high-end chefs, but as of this year you can pick up a home circulator at Williams Sonoma.

In all cases sear the meat first and put into Zip-loc bags with butter. Cook in an immersion circulator for the prescribed times, then sear again for a minute or two per side on high heat.

Raccoon: I recommend cooking raccoon in a traditional braise. 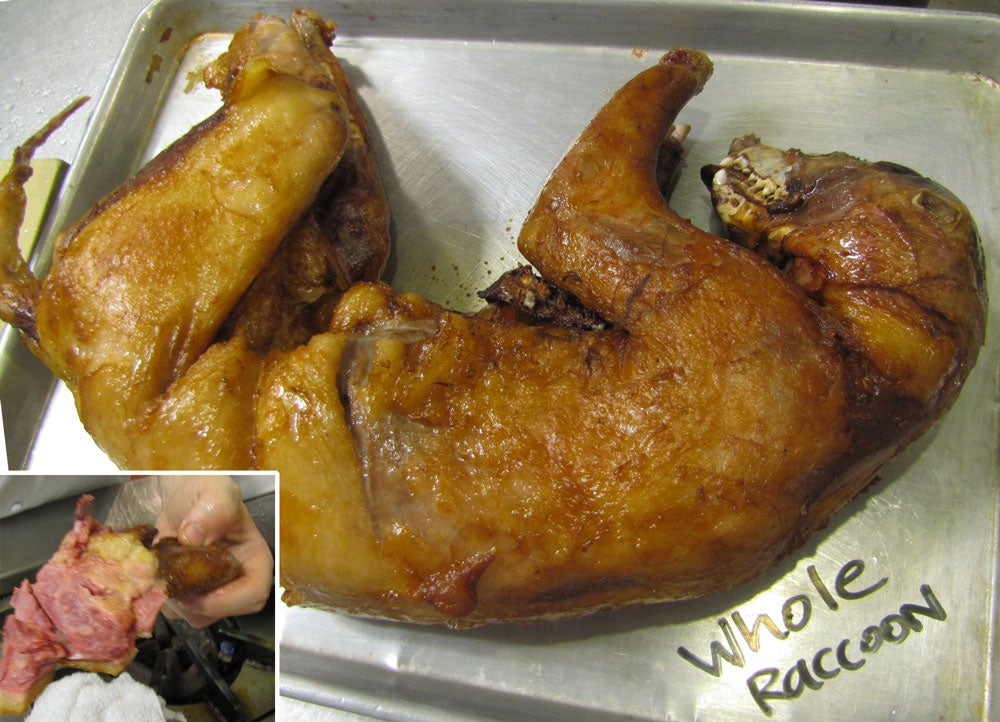