The Turbine Tweak That Could Save Battered Bats 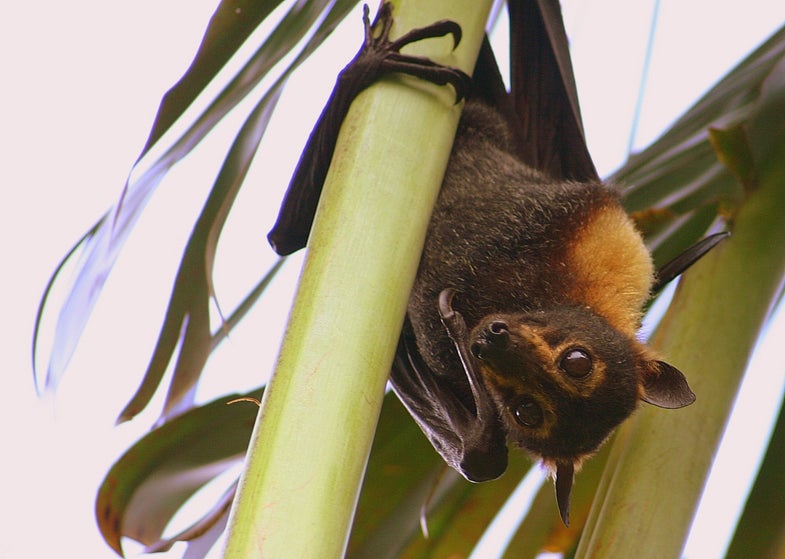 Wind turbines kill upwards of 600,000 bats each year. (As if bats didn’t have enough problems already…) But the good news is that there may be something we can do to cut down on turbine-related deaths. Paul Cryan, a biologist with the U.S. Geological Survey and the lead author of a new study, says that raising the “cut-in threshold”—the wind speed at which turbine blades start to spin—could reduce the number of fatal bat collisions at wind farms.

Cryan’s research, published today in Proceedings of the National Academy of Sciences, found that certain species of tree-roosting bats are more likely to be killed by wind turbines when the blades are moving at low speeds. By tracking the bats with thermal surveillance cameras, near-infrared video, acoustic detectors, and radar, the researchers discovered that bats tend to approach turbines from downwind, particularly when the turbines spin slowly relative to the wind speeds around them. This led researchers to theorize that the wind currents around slow moving turbines may resemble those created by trees, where the bats gather to roost and hunt insects.

“We speculate that these are behaviors that evolved in trees, and the bats, basically, can’t tell the difference between wind turbines and trees,” says Cryan, the lead author of the study. “Bats have been around for billions of years and there’s nothing in their history to prepare them for something that looks like a tree, yet isn’t a tree, and has ‘branches’ that are moving.”

Making the cut-in threshold higher should result in fewer of the slow-moving turbines that the bats confuse for trees. It’s a strategy that’s already been undertaken at some wind farms where endangered bats have been found dead. For example, in cases where a turbine usually starts spinning when the wind reaches 13 feet per second, then increasing its cut-in threshold to16 feet per second has reduced fatalities.

Although Cryan and his colleagues did not undertake a formal prescription in the published paper, he recommends further study of the cut-in threshold strategy for protecting tree-roosting bats. Other mitigation strategies include chasing bats away with acoustic devices, or tracking the bats and automatically disengaging the turbines as they go by.