How to Clean Up Hungary’s 16-Square-Mile Toxic Mess

So an industrial accident has blanketed your countryside in millions of cubic feet of caustic sludge. Now what? 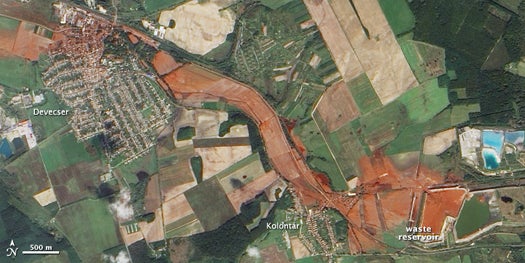 Scenes of caustic red sludge surging through pastoral Hungarian villages last week evoked a familiar blend of human pathos and righteous anger that most of us had shelved shortly after the BP well was capped. Then the news cycle turned over and our attention moved elsewhere. But as emergency workers in western Hungary slog through ankle deep rivers of toxic red muck to clear roads and contain the growing mess, the hardest job hasn’t even started: the cleanup of an estimated 30 million cubic feet of alkaline mud covering some 16 square miles of Hungarian countryside.

So far, nine people have died and more than 100 have sought medical treatment in the immediate aftermath of the industrial calamity – the “red mud,” as it’s known, is a byproduct of the aluminum production process – but the larger impact of the massive toxic spill will be measured in decades rather than weeks. That’s because the sludge – rich in inorganic salts, toxic metal oxides, and highly basic sodium hydroxide – isn’t the kind of stuff emergency workers can simply mop up. With pH levels as high as 13 in some places (seven is neutral; pH 13 is as caustic as bleach or engine cleaner), the toxicity of the metallic components take a backseat to the salts and spiking pH levels that could potentially make the land unusable for decades.

“The deposition salts and the high pH are going to render the land unproductive for agriculture,” says Dr. David Dzombak, a professor of civil and environmental engineering at Carnegie Mellon University. “It’s going to kill the plants that are there now, and even if you just want to re-plant grass or have a city park or landscaping, you won’t be able to until you do something to address those impacts.”

The first step in addressing those impacts is isolating and removing the source of the contamination. For a swath of territory approaching the size of the island of Manhattan, that’s going to be a very expensive first step for Hungary.

“You have to do physical removal,” says Wei-xian Zhang, professor of civil and environmental engineering at Lehigh University. “Then there are different remediation technologies to recover or clean up the small amounts of residuals left after the physical removal.”

The removal process is already somewhat underway in Hungary, though not really in earnest. Workers in Hungary are now working to clear roadways and make way for emergency vehicles and the eventual larger cleanup effort. But as the situation shifts from emergency response to land remediation, workers will try to recover and deal with as much of the sludge as possible, a volume estimate to be anywhere from 25 million to 35 million cubic feet.

Crews will have to shovel all that red mud – some of which will have dried into a hardened mass that scatters toxic, breathable particulate matter on the wind – into trucks for removal to a specially engineered landfill for proper storage, a costly undertaking. Then, site by site, engineers will have to decide how much topsoil has been contaminated – and to what degree – and answer the tough question inherent in pretty much all land remediation projects: how clean is clean enough? Topsoil deemed to be too contaminated would also be removed to a landfill. There are ways to wash soil – stripping it of its contaminants and returning it to the ground – but again high costs make such techniques more or less unfeasible for a disaster area the size of Hungary’s.

“The best thing for them to do is to build a landfill near the site and try to remove the topsoil and move it into a landfill,” Zhang says. “If you can, you move 95 percent and treat the remaining 5 percent.”

With the bulk of the contamination safely removed, the problem becomes decidedly more manageable. But the residual contamination is the hardest to get at, having penetrated into the underlying earth. From here remediation efforts swap from macro to micro, attempting to track down the contaminants in the soil and neutralize their effects.

“The carbon dioxide in the atmosphere itself will neutralize the material,” Dzombak says. “But that’s a slow process. It’s a several-decades kind of time frame.” To speed things up, engineers can introduce acidic additives to the soil to neutralize the alkaline sodium hydroxide. The heavy metals are another story. As Zhang points out, you can degrade organic contaminants like hydrocarbons into carbon dioxide, essentially making them disappear. But mercury or arsenic atoms are going to remain mercury or arsenic atoms, barring some kind of nuclear reaction.

That’s not to say there’s no way to mitigate the effects of toxic heavy metals in the soil. A handful of emerging technologies could potentially blunt the environmental impact of all those metal oxides given the opportunity.

At Lehigh University, Zhang’s lab has engineered nanoparticle solutions that can chase organics like heating oil or gasoline deep into the soil, converting them into harmless compounds. In the case of metallic contaminants, such a solution couldn’t neutralize the heavy metals outright but specially-coated nanoparticles could seek out metal oxide particles deep in the soil, binding to them and hindering their migration into deeper soil or groundwater below.

Aerogels– those incredibly porous solids left over when the liquid component of a gel is replaced with gas – present another promising solution for future land remediation projects. Dr. David Schiraldi, a professor of macromolecular science and engineering at Case Western Reserve University, engineered hydrophobic, hydrocarbon-loving aerogels as a means to clean up this summer’s Gulf of Mexico oil spill. Like smart sponges, the aerogels can quickly soak up the crude in an oil-water mix, leaving clean H20 behind. With properly engineered surface characteristics, an aerogel could separate toxic metals from soil or water in the same way.

“In the case of the Hungary spill you wouldn’t need a lot of specificity, just something that would pull a broad swath of metals out,” Schiraldi says. “Could you load up the surface of an aerogel with those kinds of compounds? Why not?”

But in Hungary’s case, such remediation techniques won’t be a factor into the current cleanup. Zhang’s nanotech solution would require time and expense to refine for the task, and Schiraldi says creating an efficient heavy metal sponge would take at least a couple of years of research and development “Is it possible?” Schiraldi says. “Yes. Is it sitting on the shelf ready to be rolled out? No.”

Even if the technologies were available off-the-shelf, the expense would likely render them unfeasible for the Hungarian spill in all but the most contaminated hot spots. For a disaster of this magnitude, the task of restoring the land downhill from the fractured waste reservoir will likely consist of ongoing containment, excavation, and painfully slow remediation. It will be years before much of the land is workable again. Entire villages may have to be abandoned while cleanup crews strip vast areas of contaminated topsoil so the planet’s natural biology can absorb the toxic shock.

“It’s a pretty simple problem,” Dzombak says. “It’s alkaline material mixed in with soil, and there are a limited number of things you can do to address that. It’s a crude problem and the solution is pretty straightforward.”