Video: Curiosity Rover Tries Out Its New Wheels for the First Time

It may not look like much, but NASA’s next candidate to touch down on Mars has taken its first steps... 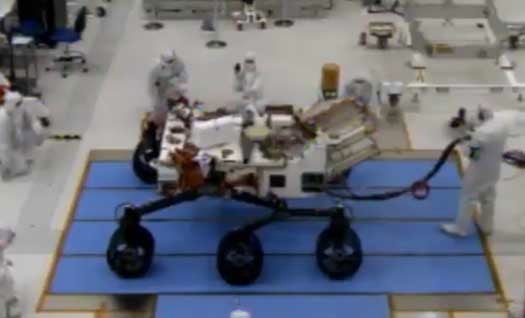 It may not look like much, but NASA’s next candidate to touch down on Mars has taken its first steps toward its larger ambition of exploring the Martian landscape in 2012.

Engineers at NASA’s Jet Propulsion Laboratory had a big week last week, mounting the Remote Sensing Mast and an array of navigation and sensing cameras on their latest Mars rover. Then on Friday Curiosity took its first drive, traveling about three feet back and forth on its brand new 20-inch aluminum wheels.

To the applause of cleanroom-clad NASA engineers, Curiosity crawled along the floor of a lab at JPL while being controlled remotely by wire, rather than by the software that will direct the rover’s movement on Mars. But as a milestone it’s fairly significant. Just a few weeks ago, Curiosity looked like spare parts; today it is the size of a small SUV – far larger than the Spirit and Opportunity rovers already on Mars – and looks the part of a next-gen space exploration vehicle.

But the best is yet to come. While Curiosity is now outfitted with two navigation chams, two mast cameras and a laser chemistry camera, it will soon enough be augmented with its principal geology tool: a 6-foot robotic arm sporting a powerful jackhammer drill and a microscope.

If the schedule holds up, Curiosity should launch next year and arrive on Mars in August 2012. From there, it will explore the landscape for a suitable landing site for future missions while collecting and analyzing rock samples that should shed more light on the planet’s geological history.

See Curiosity go in the video below.