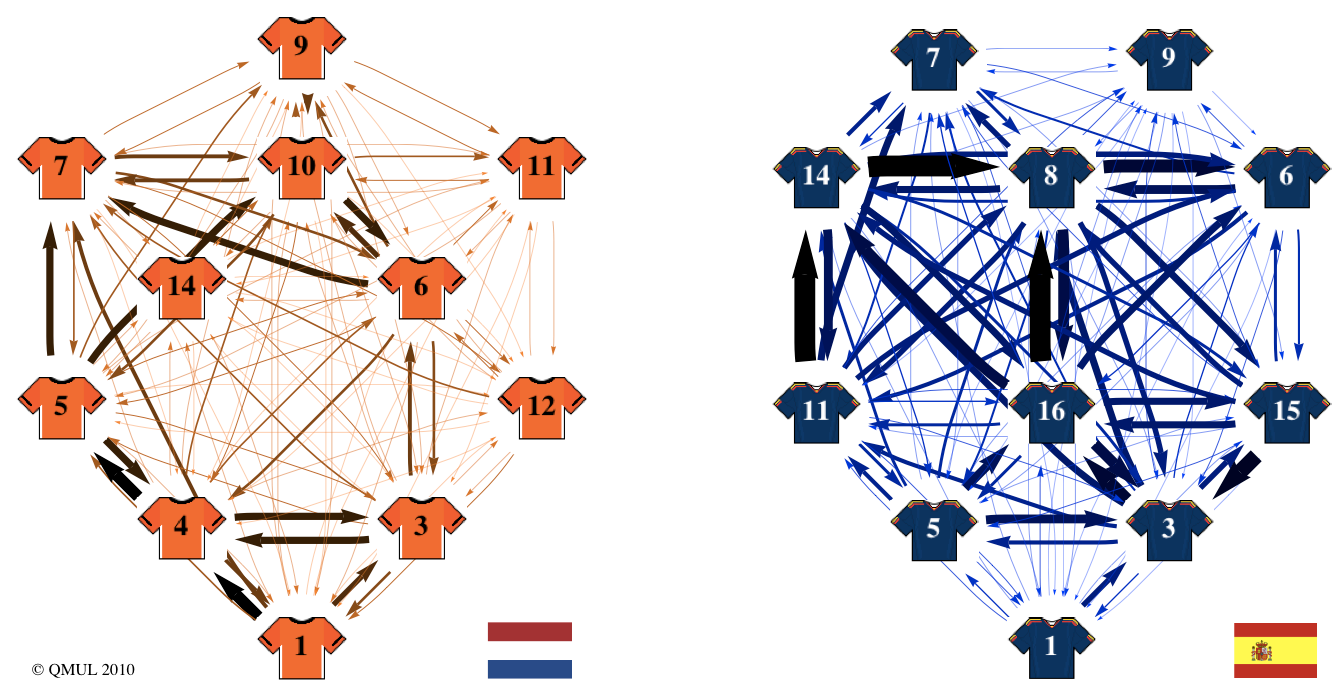 We’re not endorsing any big bets, of course, but a pair of London mathematicians say they’re confident Spain will win the World Cup final Sunday. It’s not just a prediction — it’s science.

Queen Mary, University of London professors — and soccer fans — Javier López Peña and Hugo Touchette collected ball-passing data from each World Cup team and used graph theory to analyze each team’s style of play. Their results reveal “gaping holes” in England’s strategy against Germany, which they say explains team England’s loss. The results also show that Spain’s propensity for passing might help them beat the Dutch this weekend.

Touchette explains in a university press release that the researchers devised a network of passes among each player. Each player gets a score called centrality, which measures how important he is to the network; the higher the centrality score, the bigger the impact if he can’t play. Regrettably, the team did not elaborate on Thomas Müller’s centrality score.

Graph theory is often used to study computer networks by modeling what would happen if a certain element was removed. But why not use it to study soccer patterns?

The networks show Spanish players make a lot of passes — almost 40 percent more than Germany and twice as many as the Dutch. López Peña explains the passes are well-distributed among all the players, especially those playing at mid-field. The stats bear this out: David Villa, the tournament’s highest goal scorer, has received an average of 37 passes per game, more than any other forward from any team, López Peña says.

By contrast, Team Netherlands plays a more offensive game, with fewer passes and less intricate footwork, López Peña says. They have scored plenty of goals on free kicks and rely on their sheer physical prowess to dominate the game, he says.

The duo also analyzed the England-Germany game to unveil weaknesses in the English strategy. Forward Wayne Rooney received nearly three times more passes than Jermain Defoe, so it was easy for the Germans to block him.

In other soccer prediction news, Paul the Octopus agrees with the mathematicians and says Spain will win the World Cup. The clairvoyant cephalopod has yet to make an inaccurate prediction, garnering him international stardom and even lucrative contract offers, according to AP.

By choosing a mussel from a Spanish flag-bedecked container, he predicted Spain would defeat Germany in the semifinals. In response, some German fans called for octopus stew — which prompted the Spanish Prime Minister to offer “El Pulpo Paul” official state protection.

“I am concerned about the octopus,” PM Jose Luis Rodriguez Zapatero said. “I’m thinking about sending in a team to protect the octopus because obviously it was very spectacular that he should get Spain’s victory right from there.”

Maybe those math professors ought to have some protection, too.