Literally donning an electrode-studded thinking cap can improve your memory by 110 percent, according to a new study by Australian... 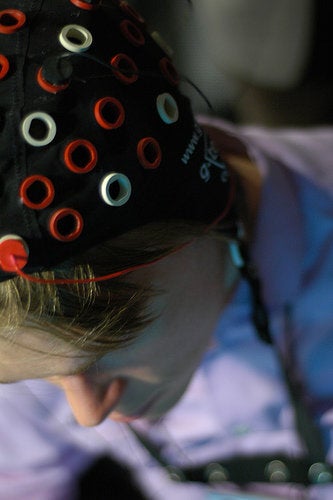 Literally donning an electrode-studded thinking cap can improve your memory by 110 percent, according to a new study by Australian researchers. The method applies electricity to the head to inhibit a specific region of the brain that has been implicated in autism.

The finding is a follow-up to previous research at the same lab that shows certain types of brain stimulation can unlock savant qualities in people who had not previously exhibited them.

Richard Chi, a Ph.D. student at the Centre for the Mind at the University of Sydney, wondered if inhibiting a specific brain area could improve memory as well as perceptual skills experienced by people with autism, New Scientist reports.

In the study, 36 volunteers examined a series of slides containing shapes that varied in number, size and color, according to New Scientist. Then they were shown five “test” slides, some of which included the study slides, and some that did not. They were asked if they could remember any of the original “study” slides.

Then they donned an electrode cap that transmitted a weak electrical signal, in a method called transcranial direct current stimulation. One group received signals that boosted their right anterior temporal lobes, and suppressed activity on their left ATL. A second group got the opposite treatment and a third was a placebo group.

Both sides of the anterior temporal lobe are important for memory processing — the left ATL deals with context, while the right ATL is associated with visual memory, New Scientist says. Chi’s team says inhibiting activity in the left ATL reduces the confusing influence of context, cutting down on visual memory errors. People can more easily perceive the literal details of what they’re seeing.

The team has already shown that low-frequency magnetic pulses can inhibit false memories, also by temporarily inhibiting the left ATL.

People with autism have lesions on their left ATL, New Scientist reports.