The Curiosity rover may be 190 million miles from Earth, but there are many ways you can share in its adventure. 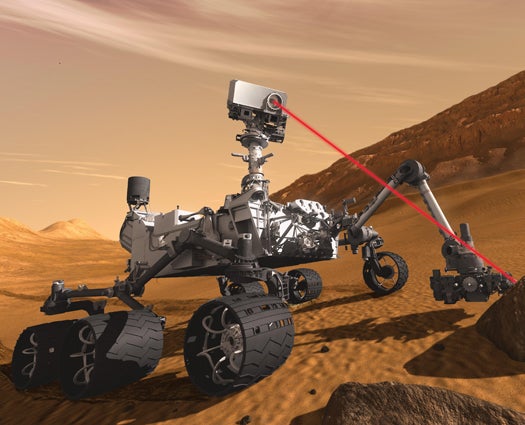 Through Twitter, Curiosity has found its voice. The NASA-issued @MarsCuriosity tweets provide a play-by-play of the rover’s exploits on Mars. They’ve also inspired parody accounts. Case in point: the following exchange between Curiosity, a Martian rock, and Curiosity‘s sarcastic alter ego.

In Mars Rover Landing, a free downloadable game for the Xbox 360, Curiosity‘s fate rests in the hands of players. Wannabe pilots control the craft’s speed and angle of descent by moving their bodies in front of Kinect’s motion sensor. Guiding the rover through its “seven minutes of terror” landing sequence is fun and, not surprisingly, tricky. 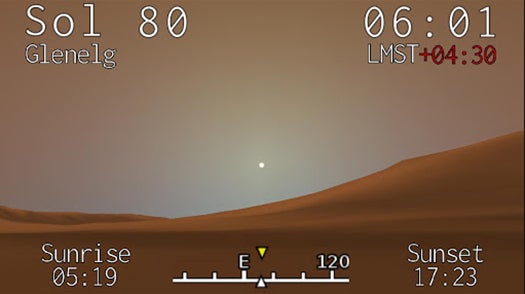 Oliver Blake, a flight operations engineer for the British-led Beagle 2 Mars probe, wanted to watch the sun rise over Mars right along with the Curiosity rover. So using topographic data from NASA’s Mars Orbiter Laser Altimeter, Blake created Curiosity Clock, an Android app ($1.99) that shows the terrain on Mars in Local True Solar Time. A finger drag will pan the landscape 360 degrees at five locations on Curiosity‘s 687-Earth-day mission plan. Users can also scroll through time to watch the sun cast shadows over the Red Planet or gaze at the stars accurately positioned above it.

Correction: The original Curiosity Clock image showed a screenshot of the wrong app and has been updated.