Youth and vigor have their advantages, but there is something to be said for longevity. NASA’s Mars Odyssey orbiter has... 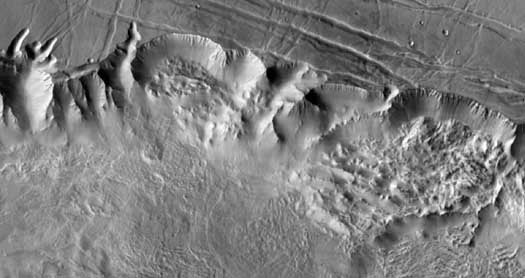 Youth and vigor have their advantages, but there is something to be said for longevity. NASA’s Mars Odyssey orbiter has been circling the red planet since 2001 and has just released the best map ever made of the Martian surface.

The new Martian map is a composite of 21,000 images captured by Odyssey over the last decade that can be zoomed to scales as small as 100 meters across. While the newer Mars Reconnaissance Orbiter will eventually trump that with higher resolution maps that can zoom in down to about one meter wide, it still has a lot of landscape to cover.

The above image is a detail of Mars’ Valles Marineris, capturing a swath of terrain about 90 miles across, so that should give you some idea of how detailed the map really is. But rather than take our word for it, you can check out the real thing here. Taken on the whole it looks fairly unimpressive, but zoom in and you can see individual features on the Martian surface quite clearly.

Though Odyssey’s “most detailed map” record will eventually be eclipsed, it still has the chance to capture one more record if it can hang on for a few more months. NASA’s Mars Global Surveyor is currently the longest-operating Martian spacecraft, having operated for just more than nine years. Odyssey began orbiting in October of 2001, so if it can reach the new year, it will collect a longevity record as well.