But where is this stellar river heading? 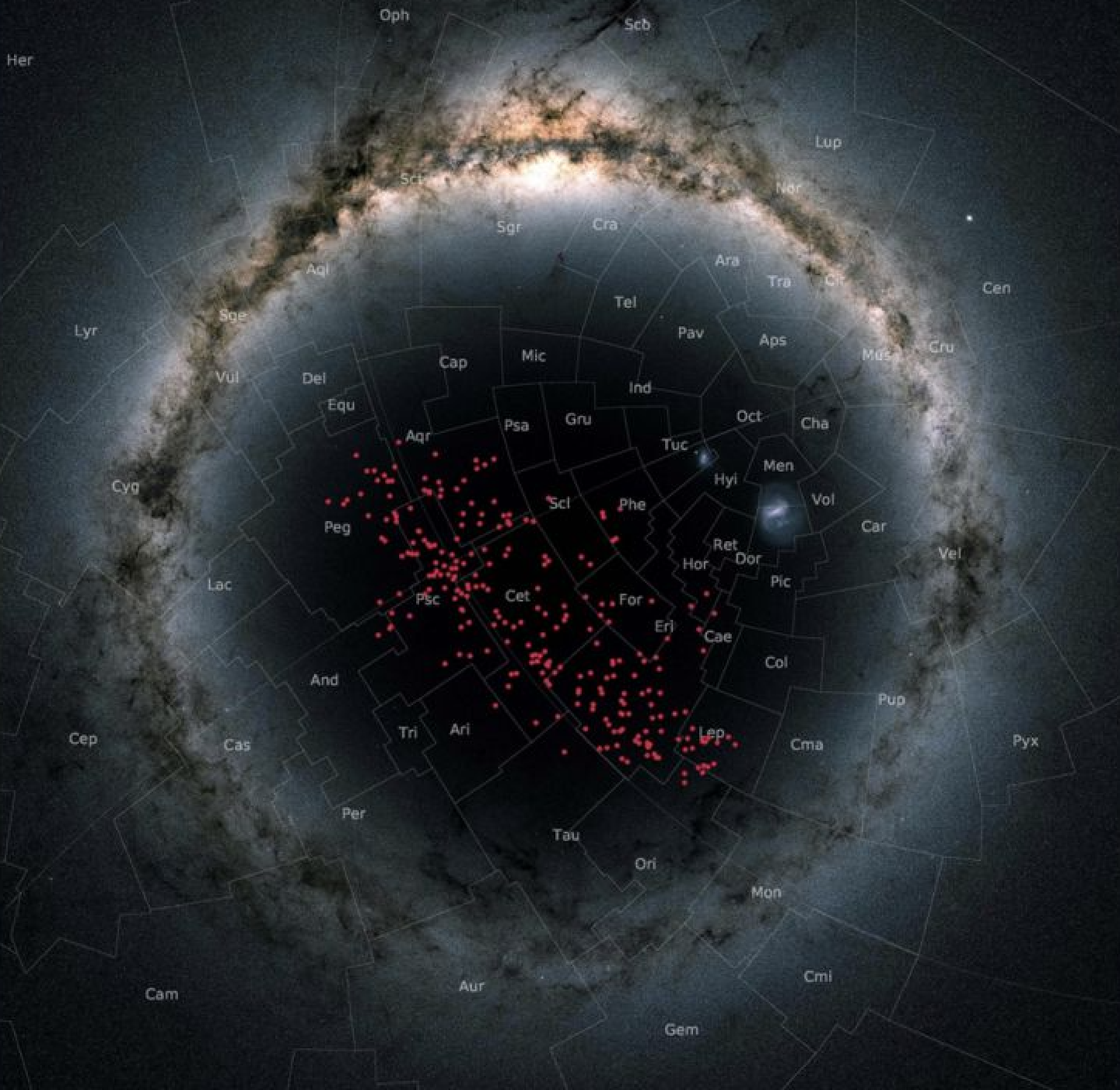 A river of stars was hiding in plain sight. Courtesy of Astronomy & Astrophysics
SHARE

Discovering a new star is always a delight in astronomy. So you can probably imagine the excitement over discovering a giant stream of stars winding through the Milky Way.

A new study published this month in the journal Astronomy and Astrophysics details new observations of a 1,300-light-year-long cluster of more than 4,000 stars that have been moving together through the southern sky for about a billion years now. Distributed like a river of bright lights, a cluster like this has never been found so close to Earth, and could create some useful opportunities for learning about the structure and evolution of the galaxy.

“Similar stream-like structures have been known for quite a while now,” says Stefan Meingast, a researcher from the University of Vienna and the lead author of the new study. They are typically considered remnants of more globular clusters or dwarf galaxies that have been pulled apart and distorted over time, but still share a pattern of movement that hint at a shared origin.

Previous streams have been found in the outskirts of the Milky Way. “Our stream, however, is the first one that was found inside the galaxy, in the immediate vicinity of the sun,” says Meingast. “It therefore is a unique probe for studying the evolution of clusters and for measuring the gravity field of the galaxy.”

There had been previous hints that such a stream existed, through some scattered observations. But this latest investigation is the first to confirm that this is a big, coherent structure. What changed? The European Space Agency’s Gaia mission. An audacious project launched in 2013, Gaia plans to catalog over 1 billion astronomical objects and provide the most precise 3D map of the galaxy ever made.

Yes, it’s a bit strange to think a cluster of stars this large was simply hiding in plain sight for so long, but astronomers know better than to feel embarrassed. When you think about how extraordinarily large space is, trying to locate even several thousand stars streaming through the galaxy is “truly like searching for the needle in the haystack,” says Meingast.

The team was initially tasked with simply using the Gaia data to locate groups of stars that were moving together, and eventually they came across the “structure” of these stars that were moving as a group. The team pinpointed only about 200 stars; the 4,000 figure, and their 1-billion-year age, are extrapolations based on an analysis of stellar brightness, distance, and other factors.

It’s an interesting discovery on its own, but there are some larger, more tantalizing implications worth unpacking. “In our interpretation,” says Meingast, “this phenomenon of stream-like systems is sort of a universal mechanism that must apply to all other star clusters as well.” There are probably many, many other stellar rivers coursing through the Milky Way, and the new findings give us a loose framework for how to find them.

That would suggest it’s actually incredibly common for stars in the Milky Way to have formed in young clusters which are later on stretched out by the gravitational field of the galaxy. Meingast poses the idea that the sun was probably formed in a cluster some 4 to 5 billion years ago. So that raises the question, where are its siblings? It’s possible they’re scattered all across the galaxy as they’ve been stretched out over time, and if that’s the case, there will definitely be an interest in tracking those stars down for a family reunion.

The team hopes to follow-up on the new findings with a more detailed look at the stream that can confirm the age and quantity of stars that are part of the river, as well as using the Gaia data to locate more streams in the galaxy. The study is yet another affirmation of the impact of the Gaia mission on the astronomy community, and it’s a good bet we’ll be hearing of many more discoveries like this moving forward. There’s also a possibility the structure can play a significant role in helping scientists better characterize the gravitational field of the galaxy, and act as a useful target for planet-hunting missions. All rivers lead somewhere, even in space.