The so-called ‘Radcliffe Wave’ stretches on for 9,000 light years. 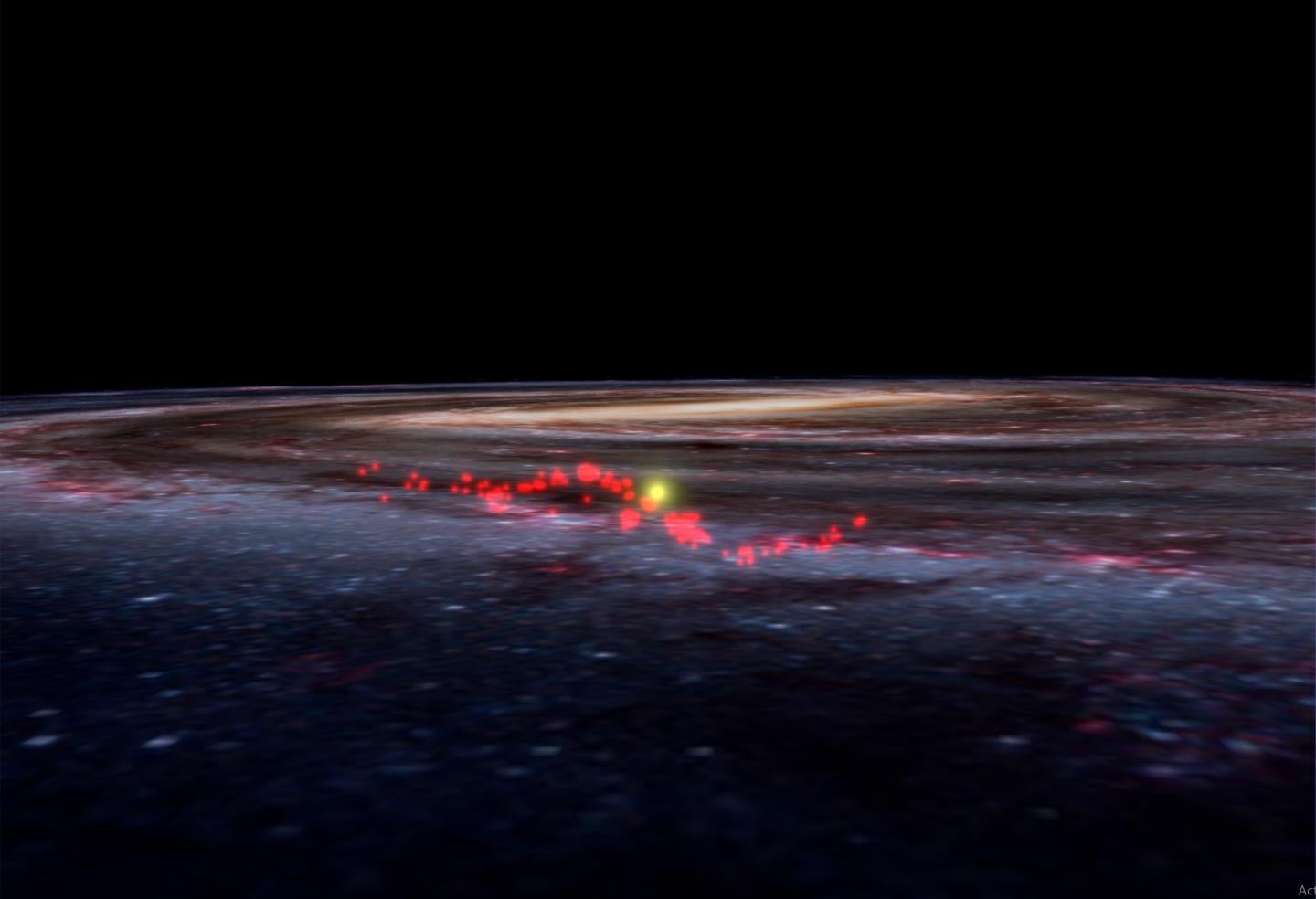 The recently discovered entourage of gas clouds ripples above and below the disk of the Milky Way. Alyssa Goodman / Harvard University
SHARE

Our galaxy swirls in mysterious, often puzzling ways. Starfish-like arms of dust and stars extending tens of thousands of light years spiral together as the entire disk pinwheels. Not that galactic cartographers can see that structure from their vantage point, however, trapped as they are in the outer reaches of the disk. From Earth, we see the entire Milky Way foreshortened into a single bright band spilling across the sky.

But now, a team of astronomers has expanded that band into one of the most accurate 3D maps yet of Earth’s galactic neighborhood. Researchers had believed for more than a century that local dust clouds—the sort that give birth to baby stars—lie in a distant ring around the sun, far beyond the furthest planets. But the new perspective revealed a structure entirely different in both shape and scale. Rather, the clouds form a vast wave, the team announced Tuesday in a Nature publication, stretching straight along the local spiral arm while bending above and below the galaxy’s disk.

“No astronomer expected that we live next to a giant, wave-like collection of gas – or that it forms the Local Arm of the Milky Way,” said Alyssa Goodman, a Harvard astronomer and one of the work’s authors, in a press release.

The new map helps solve a 150-year-old mystery: why, when astronomers connected the dots between the nearby stellar nurseries, they appeared to form a single 3,000-light-year-wide ring, known as Gould’s Belt, located (conveniently) with our sun near its center. Some suggested it was an expanding shockwave from an ancient dark matter collision, but no consensus emerged. Nevertheless, the concept of Gould’s Belt became essential in explaining where stars were born in our corner of the Milky Way. “All of our understanding of star formation and stellar nurseries in our part of the galaxy is informed by this model,” says Harvard astronomer Catherine Zucker, who co-authored the new work. But the classic model was mistaken, Zucker and her colleagues have learned. The ring shape was just an illusion.

The group set out to map the local dust clouds in 3D by calculating their distance from Earth. Dust in star forming regions generally makes distance measurements difficult because it blocks light from the young stars, but the team found a way to turn it to their advantage. Stars that aren’t entirely snuffed out appear redder when their starlight filters through dust, much as sunsets appear orange when sunlight has to plow through more of Earth’s atmosphere. By combining this color shift with precise location data from the European Gaia spacecraft, which measures distances to stars from Earth, the team could pinpoint where each dust cloud floated in space.

And the pattern of those clouds came as a complete surprise. They didn’t lie in a ring, but rather traced out a massive wave, which the team named the Radcliffe Wave after a Harvard institute. “We essentially created the largest catalog of stellar nurseries,” Zucker says, “and this Radcliffe Wave structure popped out immediately.”

From above (you can play with an interactive 3D model here), that structure morphs into a wispy line stretching 9,000 light years—making it one of the largest known objects in the Milky Way. The team estimates that it harbors a combined mass in gas and stars of at least 3 million suns. From the side, however, it forms rolling hills and valleys that peak hundreds of light years above and below middle of the disk before tapering off. The wave sits just 500 light years from our solar system at its closest point, and based on the sun’s motion around the center of the galaxy, the researchers estimate that Earth passed through the wave just 13 million years ago—a few million years before the appearance of the earliest apes.

Given its strikingly ripple-like shape, the researchers suggest that the wave is likely in motion, its peaks and troughs destined to flip over cosmic time like a wiggling eel. While the team will have to wait for future data from Gaia to study that complex motion, line-of-sight observations of the dust clouds let the group measure how much the nurseries meander toward or away from Earth. The data suggests that the dust clouds didn’t just happen to fall into this striking pattern; they really do move together as one united object.

“We can no longer think of these very famous star-forming regions like Orion in isolation. Zucker says. “They’re part of this gigantic structure that extends 9,000 light years. We have to think of this larger galactic context for how star formation happens in the Milky Way.”

The Radcliffe Wave has two features that cry out for explanation: how straight it is along its length, and up-and-down waviness. And they might not necessarily be related.

When astronomers zoom in on other galaxies oriented at a convenient top-down perspective, they have noticed that arms often lose their curves. What looks like a smooth spiral from afar resolves into a string of line segments laid out end-to-end, like if you tried to outline a circle with matchsticks. The Radcliffe Wave is about as long as those galactic matchsticks, suggesting that the wave itself might be the straight segment of our local galactic arm.

A number of theories predict how the gravitational pull of an arm might pull its own gas into a straight line, but no one expected these segments to undulate, as Radcliffe’s Wave appears to.

To explain the possible rippling of our arm, Zucker speculates about ancient trauma. An orbiting dwarf galaxy or large gas cloud may have walloped our neighborhood in the distant past, setting off a reverberation in an otherwise straight arm segment that continues to wobble today.

Teasing out the history of the Radcliffe Wave will require further analysis and more precise stellar position measurements from Gaia, whose next data release is expected late this year. But the object’s discovery is already making galactic waves. “It’s going to change our understanding of the modeling of spiral arms,” Zucker says.