The peace of the modern solar system hides a violent youth. 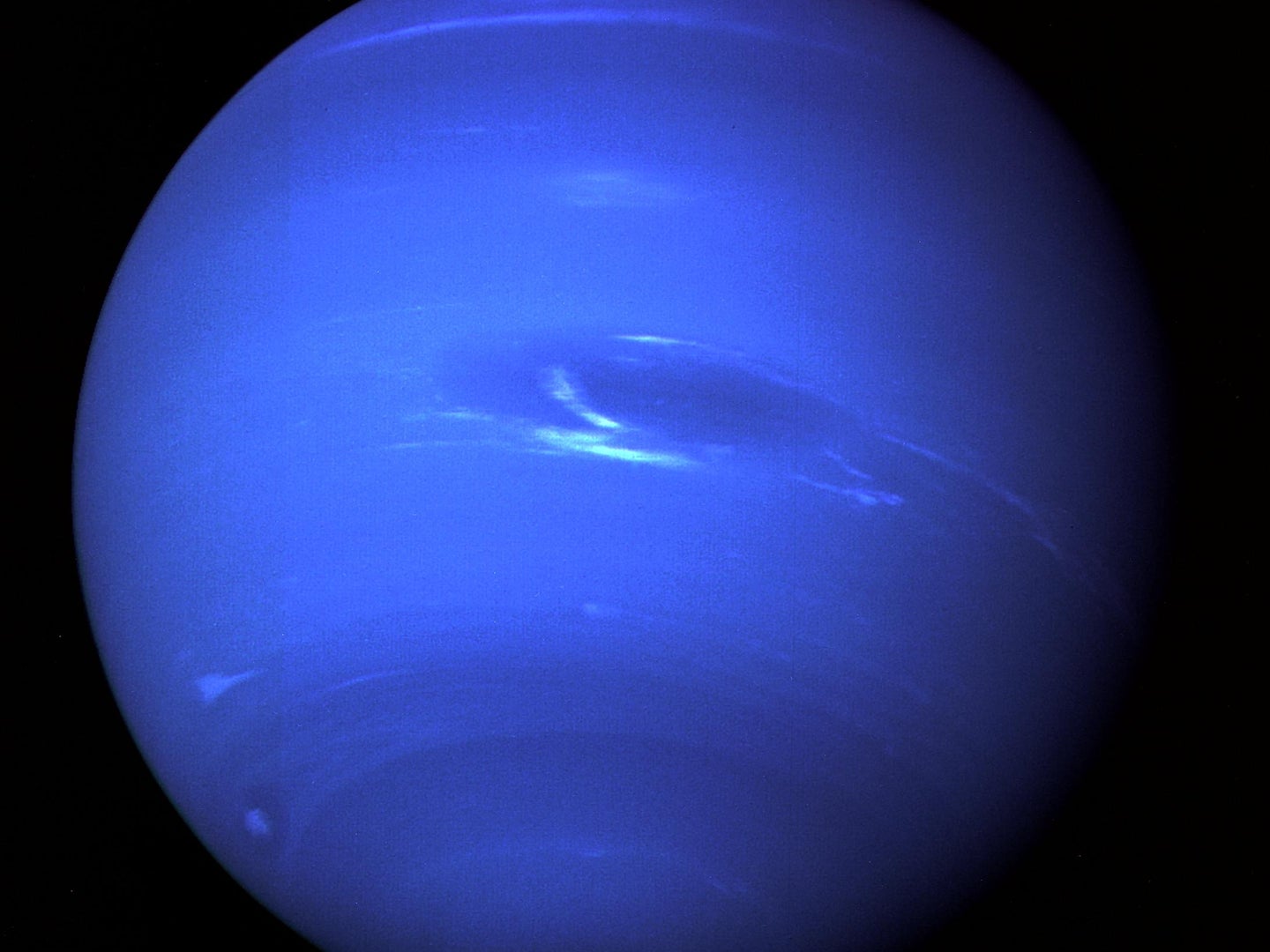 This image was taken by Voyager 2, and features its Great Dark Spot and a bright moving spot colloquially called Scooter. NASA/JPL
SHARE

The modern solar system spins serenely, the planets locked in seemingly eternal circles around the sun. But it wasn’t always so. This tranquility appears to have emerged only after a gladiatorial period of planetary clashes—one in which titans ricocheted off each other, perhaps ejecting at least one rival sibling from the cosmic arena altogether.

Researchers have spent years scouring the solar system for clues of how that comparatively chaotic epoch might have played out. In a modest cluster of far-off rocks, David Nesvorny, a planetary scientist at the Southwest Research Institute, has found a figurative blood spatter suggestive of one particular conflict: a tussle between Neptune and an unknown planet that saw Neptune emerge victorious. His analysis, which appeared in late December in a not-yet-peer reviewed publication, adds further support to the notion that the solar system was once home to more than its current cadre of worlds.

To get this cohort of distant objects to pop out when you run the simulations, says Nathan Kaib, a planetary scientist at the University of Oklahoma who was not involved in the research, it seems like “you really need a planet to scatter [Neptune] off of.” That means, in theory, at least one extra planet may have been whizzing around the sun in eons past, knocking Neptune for a loop.

One way researchers can learn about events that took place more than four and a half billion years ago is by studying a current collection of ice balls known as the Kuiper Belt. Starting near Neptune’s orbit and extending outward from there, these frozen objects have been doing their own thing for eons, blind to most planetary drama.

The exception is the nearby Neptune, whose orbit has synched up with the orbits of many Kuiper Belt Objects (KBOs), including Pluto. This synchronization arises through subtle gravitational nudges from Neptune, which would have stopped those KBOs from forming in the first place. But since Pluto and its companions exist, researchers realized in the 80s and 90s, Neptune must have started out perhaps 10 to 20 percent closer to the sun and then slid outward later on (after Pluto and friends had already formed in peace).

But how did it relocate? One early idea was that it spiraled out smoothly as a result of regularly bumping into small objects, but a number of observations hinted at a more dramatic rearrangement: sometime in the solar system’s first millions of years, a number of near hits may have slingshotted planets into new positions on elliptical paths. Planetary scientists refer to this calamitous period euphemistically as an “instability.”

To get a better idea of what happened to Neptune during the instability, Nesvorny focused on one particular group of dozens of KBOs discovered over the last decade or so. Their orbits pass through the outskirts of the Kuiper Belt, but what really makes them special is how their paths tip roughly ten degrees out of the solar system’s flat disk—an indication that something pushed them out. “If you have certain orbit, it’s hard to tilt it differently,” Nesvorny says.

That something, according to new simulations from Nesvorny, is most likely a Neptune that slipped outward on an orbit with a just-so shape—one that falls somewhere between a perfect circle and a more severely squashed ellipse. Other scenarios just didn’t arrange this group of KBOs in the right place with the right slant.

To get Neptune moving in precisely that way would have taken a serious jolt, likely a close encounter with another planet of perhaps comparable mass. Previous studies, including work by Nesvorny, have suggested that the early solar system originally accommodated more giant planets than just Jupiter, Saturn, Uranus, and Neptune, a scenario that grows more likely if all the orbits went screwy for a while. “If you have an instability, you’re significantly more likely to lose planets than retain your original four,” Kaib says.

When Nesvorny runs hypothetical versions of the solar system in a simulation with a third ice giant (in addition to Uranus and Neptune), everything fits. If the mystery giant nearly collides with Neptune and Neptune’s orbit stretches as it moves out, giving the band of KBOs their distinctive 10 percent incline. The evidence is circumstantial, but suggestive.

“This is science,” he says. “You never know things for sure, but it’s compelling enough for me.”

Since Neptune survived the encounter, the additional ice giant was likely ejected from the solar system to wander the darkness of the Milky Way. However, if it didn’t receive quite enough of a kick to fly completely free of the sun’s gravity, it just might have come to rest perhaps 30 times farther from the sun than Neptune is today—exactly where some astronomers have predicted an unseen Planet Nine. The booted planet hangs around only around five percent of the time in simulations, Kaib says, but those are hardly unbeatable odds.

Better understanding the possible clashes between young planets, according to Nesvorny, is simply a matter of mapping the undisturbed outer reaches of the solar system in greater detail. This task will be a major goal for the upcoming Vera C. Rubin Observatory, which is expected to begin scientific operations in 2023.

“Because we have the Kuiper Belt,” he says, “it shouldn’t be that difficult to figure out what happened.”