About a quarter of sun-like stars have likely snacked on a rocky planet. 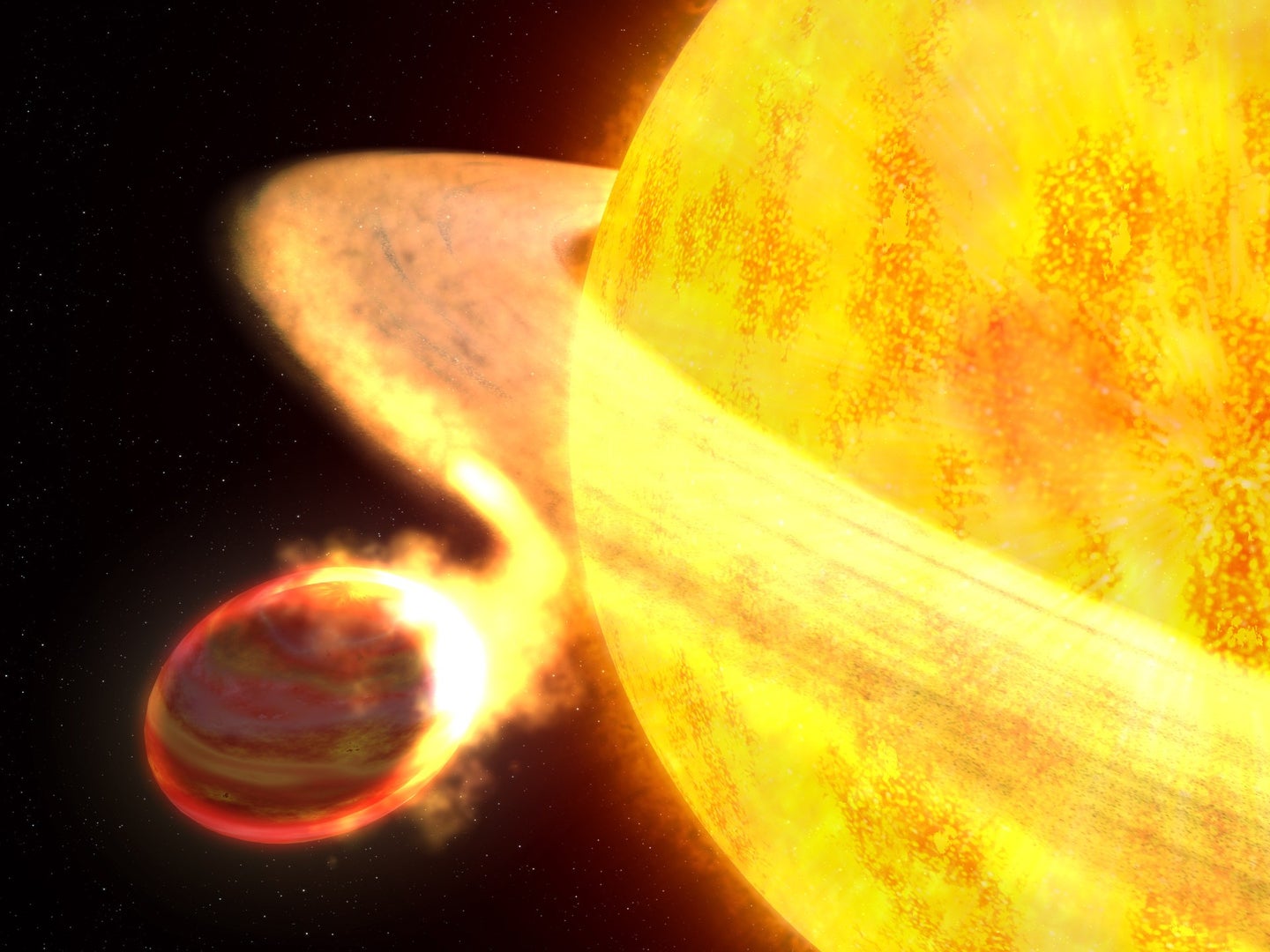 While all the planets in our solar system orbit our star in peace, the same is not true for all planets. New research shows that about a quarter of all sun-like stars eat their planets in acts of “planetary ingestion.”

An international team of astronomers looked at 107 pairs of binary stars that resemble our sun, and found 33 individual stars had chemical signatures that were different from their twin’s. While astronomers have known for a while that twin stars can be chemically different, the questions of why and how are still open.

Binary stars are spawned from the same cloud of gas and dust, so their chemical compositions should be nearly identical. The existence of mismatched sets of twins implies one of two things: Either binary stars don’t form the way astronomers think they do (a discovery that would massively overhaul our understanding of stars), or a single twin might engulf planets with unstable orbits, absorbing their chemical makeup into its own celestial body, and thus becoming chemically distinct from its sibling star.

Analyzing their binary stars, the team of researchers found that in each of the 33 fraternal pairs, one of the twins had chemical profiles and temperatures that matched what they would expect after a round of planet-munching. Those stars had elevated levels of iron and lithium, elements that are abundant in rocky planets. The findings were published in Nature Astronomy.

[Related: How cold is space, and how hot is the sun?]

“If a star is anomalously rich in iron but not in other elements such as carbon and oxygen, this can be interpreted as a signature of planetary engulfment,” Lorenzo Spina, an astrophysicist at the Astronomical Observatory of Padua who led the study, told Science. But there’s been no way to predict something as dramatic as planet-eating, Spina also told VICE, which “is exactly why our result is so important. In fact, our findings provide constraints to theoretical models that were not available before.”

Using their analysis, Spina and his team conclude that 20 to 35 percent of all sun-like stars swallow up a few of their orbiting planets. “I was very surprised to find that a significant fraction of planetary systems around Sun-like stars underwent a very dynamic and chaotic past, unlike our solar system,” he told VICE. “It suggests that, although planetary systems are common in the galaxy, many of them must be in many ways quite different from the solar system.”

The large sample size and strong statistical analysis used in this work provides great evidence for planetary ingestion, Eric Mamajek, an astronomer at NASA’s Jet Propulsion Laboratory who was not involved in the work, told Science. “This will probably end up being one of the classic papers on this subject.”

Spina and his team also note that, while a large proportion of stars have feasted on planets, it’s unlikely that our sun ever did—its chemical signature doesn’t quite match up.

Knowing that stars with certain characteristics are likely planet-swallowers may actually help astronomers find more Earth-like planets. If scientists find a star that once chomped on a planet, that may be a sign to look elsewhere for Earth 2.0 candidates, since that solar system in question likely is or was too unstable for a planet to host life (and the Earth-like planet may have been the one eaten).

“There are millions of relatively nearby stars similar to the Sun,” writes Spina in The Conversation. “Without a method to identify the most promising targets, the search for Earth 2.0 will be like the search for the proverbial needle in a haystack.”