Astronomers could detect the first hints of microbial life outside our solar system in just a few years. 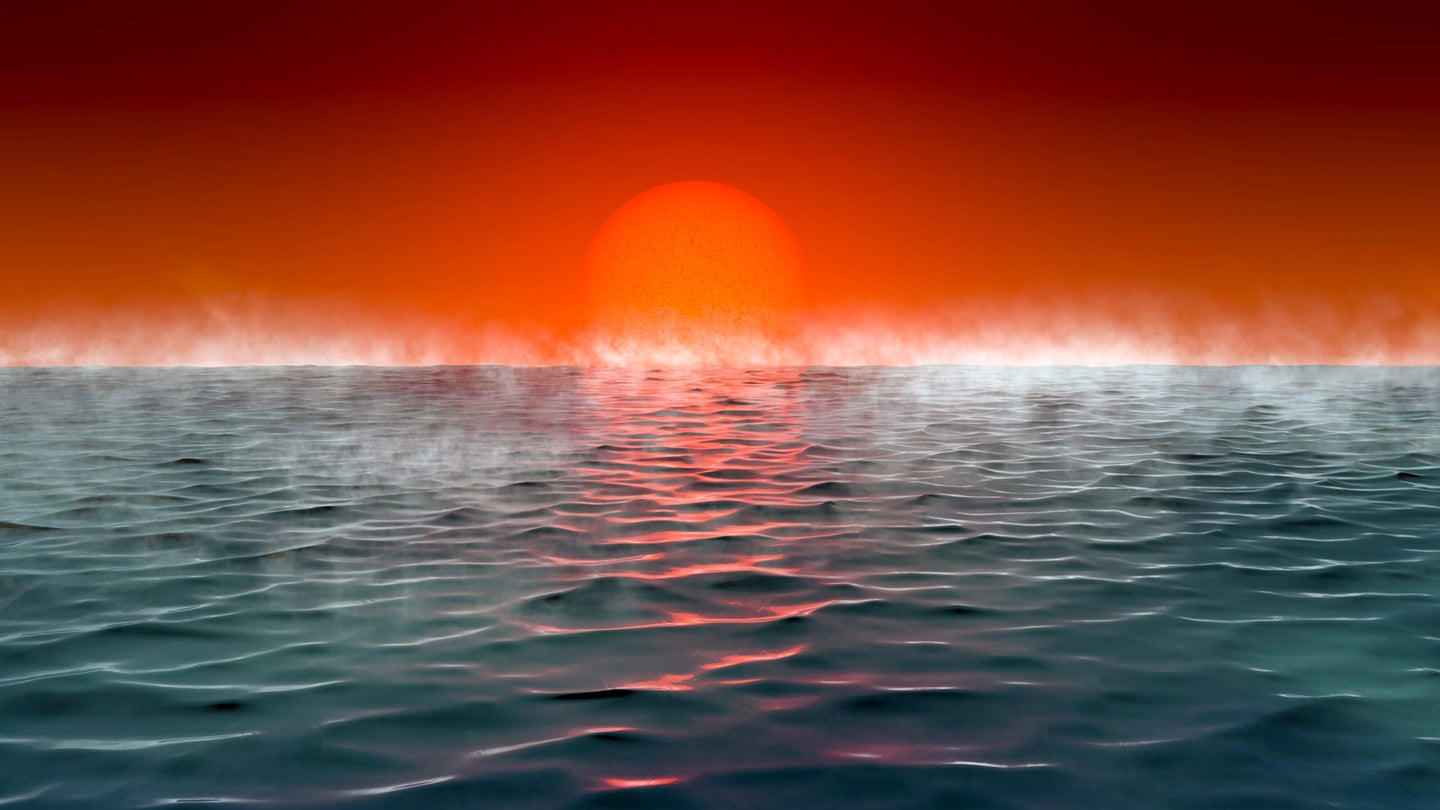 A red sun rises above a steamy ocean on a theoretical “Hycean” world. Amanda Smith, University of Cambridge
SHARE

As astronomers continue to discover scores of exoplanets, our solar system—with its itty-bitty rocky planets on the inside and its gaseous giants on the outside—is looking more and more like a weirdo.

When astronomers look close to stars in distant solar systems, they rarely see signs of Venuses or Earths. Rather, the garden-variety inner planet seems to fall somewhere between a rocky dwarf and a gassy giant. Researchers dubbed these omnipresent worlds “mini-Neptunes,” assuming them to be scaled-down versions of our solar system’s ice giants.

With no local version to study, the nature of mini-Neptunes has remained mysterious. But their thick atmospheres push down with punishing pressures that led many researchers to suspect these worlds of being little more than barren balls of hydrogen and helium.

Now, a team of exoplanet researchers are suggesting that at least some mini-Neptunes may not resemble Neptune at all. After extensive modeling, they have found that the atmospheric pressures on some of these planets could allow hot-but-not-scalding oceans to persist for billions of years. With that likelihood in mind, the group concludes that this plentiful type of inner planet could host alien microbes, and that any lifeforms on these worlds would alter their atmospheres in ways that astronomers will soon be able to detect with ease.

“[This result] greatly expands our chances of finding life,” says Nikku Madhusudhan, an astronomer at the University of Cambridge and lead author of the new work.

Astronomers can infer an exoplanet’s mass and size based on the ways it influences its host star, giving them a rough sense of whether a planet is mainly rock or gas. But when it comes to working out the finer details of what lies between a planet’s solid core and its atmosphere, researchers are mostly blind.

In 2019, however, a team used the Hubble Space Telescope to catch a glimpse of the atmosphere of one particular mini-Neptune, K2-18b. They found evidence of water vapor and clouds, which motivated Madhusudhan and some colleagues to calculate what sorts of interiors were conceivable, given the new information about the atmospheric conditions.

[Related: This distant world is a lot like Earth, but you wouldn’t want to live there]

Last year, they announced that some of the possible versions of K2-18b could feature planet-wide oceans that at least some Earth life would find tolerable, despite the world’s heat, pressure, and size. “For the first time, we demonstrated that planets can be significantly larger than Earth and still have livable conditions,” Madhusudhan says.

The deepest desire of many researchers is to find a perfect Earth twin, with the same mass, the same size, and the same orbit—close enough to its star for water to stay wet, but not so close that it boils away. But after realizing that K2-18b (which packs eight Earth masses into a volume roughly 17 times larger) could be drowning in water, Madhusudhan wondered if the field should be thinking more broadly. An Earth analog might be ideal for the kind of complex organisms that eventually invent telescopes and the internet, but it’s overkill for the sorts of simple bacteria that thrive in hot springs and deep-sea vents.

“Let’s not assume [conditions that are] cozy for humans,” he says.

Abandoning the traditional assumptions let the researchers identify one group of mini-Neptunes as habitable planets. They found that an appropriately thick and heavy hydrogen-rich atmosphere could act as the lid of a pressure cooker, allowing all-encompassing oceans to persist even under the heat endured by planets right next to their host star. The researchers named this new class of planets “Hycean” worlds (pronounced HI-shun), a portmanteau of “hydrogen” and “ocean.”

The researchers described a typical Hycean planet as well as two variations that all meet their definition of habitable (having temperatures below about 250 degrees Fahrenheit and pressures under 1,000 times that of Earth’s atmosphere.)

The textbook Hycean world would be all ocean and no continents, with persistent fog and mist rising from its steamy seas. “Dark Hycean” planets would be those where tidal forces have adjusted their spin so that one side permanently faces their star, just like the same side of our moon always faces the Earth. The day side would roast while the night side stayed relatively cool. Finally, the hydrogen atmospheres of “Cold Hycean” worlds could trap enough heat for the planets to keep their oceans from freezing even at great distances from their host star’s warmth.

The trio of Hycean worlds expands the range of planets that might be considered livable, continuing a recent movement in exoplanet science as researchers seek more sophisticated definitions of habitability.

We have this “idea of finding exactly Earth 2.0,” says Björn Benneke, an astronomer at the University of Montreal who was not involved in the research. But “there may be other ways of finding other life that is not dinosaurs crawling around on the surface.”

From candidates to confirmation

Unlike many proposals in the unavoidably speculative field of astrobiology, the Hycean hypothesis can be directly tested, and soon.

Mini-Neptunes litter the galaxy. And while many of them won’t have the right pressures and temperatures to make and keep deep oceans, their vast numbers all but guarantee that some will.

“Even if five percent of them fit this requirement,” says Benneke, who helped discover the water vapor in K2-18b’s atmosphere, “it would still be a lot of planets.”

Hycean candidates are so common that astronomers can even afford to be choosy, focusing on planets with the most ideal viewing conditions. In their publication, published yesterday in The Astrophysical Journal, Madhusudhan and his collaborators identified eleven prime targets.

Hycean worlds also have the kind of atmospheres astronomers fantasize about. Researchers figure out what’s in an atmosphere by watching as a planet passes in front of its host star, and seeing which wavelengths of light the atmosphere blocks and which it lets through.

An Earth-like atmosphere is made of heavy molecules like oxygen and nitrogen, which cling to the planet, making the atmosphere razor thin and hard to see. But a Hycean planet is surrounded by featherweight hydrogen and helium molecules, so its atmosphere puffs up dozens of times more than Earth’s does. In such conspicuous atmospheres, Madhusudhan’s group calculated, astronomers should be able to use the upcoming James Webb Space Telescope (JWST) to readily detect a handful of chemicals produced almost exclusively by organisms on Earth.

The first observations seeking these signs of life in the atmosphere of K2-18b could take place as soon as next year, if the JWST launch goes smoothly this fall. Madhusudhan estimates that the shiny new space telescope will be able to spot one of the proposed “biosignatures” (if it’s present) with just 20 hours of observation. And he is one of a number of investigators who have already received approval to run such a program during JWST’s first cycle of operations.

One detection would not guarantee that K2-18b is swimming with alien bacteria, but it would inspire other astronomers to look for additional biosignatures that could strengthen the case.

“If that happens, it opens the floodgates,” Madhusudhan says. “We might be looking at a biosignature detection on a two-to-three-year time frame.”

Benneke is planning life-hunting observations of his own, based on two different lines of reasoning. He intends to look for preliminary biosignatures in the atmosphere of one of the rocky, relatively Earth-like planets in the TRAPPIST-1 solar system. And he will also study a mini-Neptune orbiting a dim star, which could turn out to be a Hycean world.

“There are lots of reasons to be excited about both of these [paths],” he says. “It’s a very exciting time to be alive.”