Three ways scientists could search for life on Venus

The truth is out there. We just have to go get it. 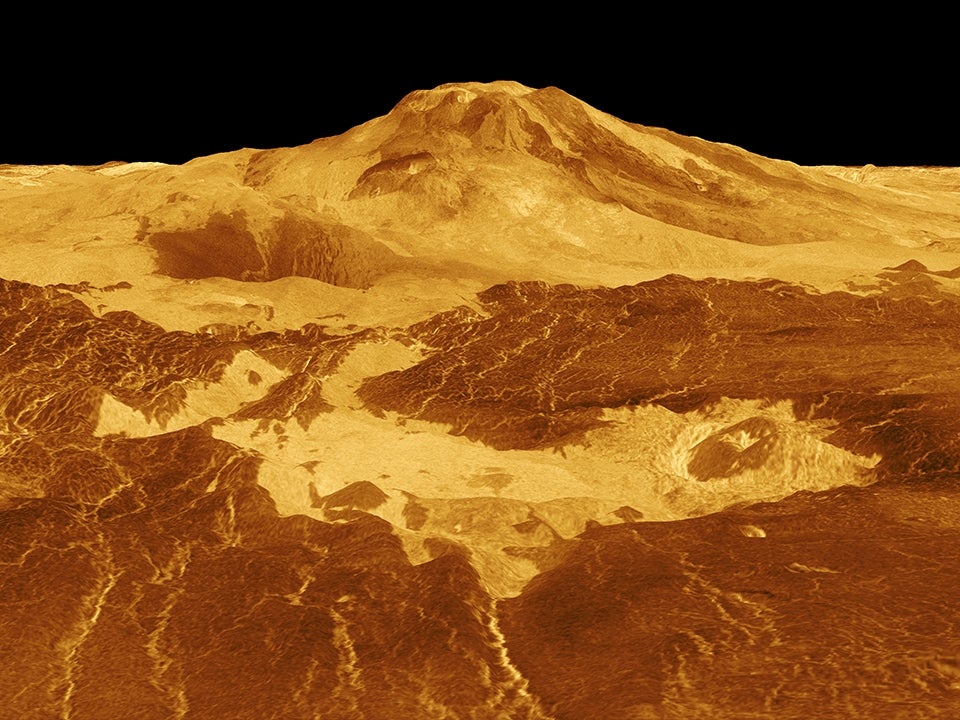 Lava flows extend for hundreds of kilometers across the fractured plains shown in the foreground, to the base of Maat Mons on Venus. NASA/JPL
SHARE

Venus is hot right now, and not just because its hellacious surface temperatures can melt lead. After a recent surprise discovery of a molecule associated with life in the planet’s atmosphere, Venusian clouds have joined the subsurface of Mars, the water oceans of Europa and Enceladus, and the methane lakes of Titan on the short list of nearby places astrobiologists would like to search for extraterrestrial life.

“Life on Venus? The discovery of phosphine, a byproduct of anaerobic biology, is the most significant development yet in building the case for life off Earth,” wrote NASA administrator Jim Bridenstine on Twitter on the day of the announcement. “It’s time to prioritize Venus.”

Whether airborne microbes are belching out phosphine or it’s spewing from unknown geological sources (and many skeptical researchers would bet on the latter), the detection underscores how little scientists know about Earth’s twin. From the composition of its rocks to the ingredients that make up its air, the present and past of Earth’s neighbor remain as opaque as its pea-soup clouds. “There are just enormous knowledge gaps about Venus all the way from the interior to the atmosphere,” says Darby Dyar, a planetary scientist at Mount Holyoke College.

Dyar believes the time has finally come to fill those gaps. She serves as the deputy principal investigator for a potential orbiter that would map the surface of Venus, one of two Venusian missions currently under consideration by NASA. And other researchers, spurred by the phosphine mystery, dream of bypassing the space agency entirely. Last week, one such team published a not-yet-peer-reviewed paper online suggesting that a privately funded fleet of balloons could search for life wafting in the Venusian clouds as soon as 2022. If any of these three missions get off the ground, they could radically change our understanding of where—and when—life might have gotten a toehold, both in our solar system and beyond.

Even before the phosphine report, Dyar and other researchers had already devoted years to planning the next generation of Venusian exploration. She champions a probe known as VERITAS—Venus Emissivity, Radio Science, InSAR, Topography, and Spectroscopy—which would orbit Venus while using radar and other sensors to survey the rocky surface. Mapping might sound basic, she says, but that’s the first necessary step to better understanding the planet. VERITAS’s charts would answer fundamental questions such as whether volcanoes still erupt, how much water vapor fills the atmosphere, and even when and where water pooled in the past (as revealed by thirsty rock types that form only in wet conditions).

But researchers’ picture of Venus is so rough that it will take a series of missions to sharpen it up. Dyar views VERITAS as one of a three-part campaign that would ideally peel back the planet’s yellow shroud—an orbiter, an atmospheric probe, and a lander. Plans for the second are underway too, with a proposal calling for a spacecraft named DAVINCI+—Deep Atmosphere Venus Investigation of Noble gases, Chemistry, and Imaging (Plus)—that would undergo a controlled plunge through the atmosphere. DAVINCI+’s instruments would sniff the composition of the alien air over the course of an hour and relay that information back to earth as the probe parachutes down toward the surface.

Both DAVINCI+ and VERITAS are essentially ready to go. In February, NASA selected the two as candidates for its Discovery Program, which funds mid-sized projects costing hundreds of millions of dollars. Next year the agency may continue to support up to two probes (the Venus missions are competing with each other, as well as two other candidates targeting moons of Jupiter and Neptune) for a potential launch around the middle of the decade. The two Venus probes have gotten quite far in the competitive selection process before, but this time Dyar hopes that excitement from the possible phosphine biosignature may help push one or both over the finish line.

“I couldn’t be more pleased that the phosphine discovery came when it did,” she says.

While neither VERITAS nor DAVINCI+ would search for microbes directly, they would address the bigger picture of whether, and for how long, Venus could have hosted life. The planet has become a scorched and acidic wasteland today, but researchers suspect it hosted balmy oceans for billions of years in its early history—roughly ten times longer than Mars did. Figuring out exactly what happened to that water will help astronomers and astrobiologists gauge the odds of life on Venus-like planets in other star systems.

“How long does liquid water persist on a planet as a star heats up?” Dyar asks. “Holy moly, we have to look at Venus so we can extrapolate to all these other exoplanets.”

While planetary scientists go through the proper channels to lay the groundwork for a global understanding of Venus, other researchers just want to know what the deal with the phosphine is. And they want to know now. To that end, a group of engineers recently described what they see as the fastest, cheapest, simplest way to look for microscopic bugs floating in Venus’s clouds.

“Our goal is to do something almost exclusively connected to the detection of life,” said Manasvi Lingam, an astrobiologist at the Florida Institute of Technology, “and in a somewhat minimal way.”

Their answer: balloons. A modest fleet of five could survive on battery power for perhaps two days about 30 miles above the ground. There, temperatures and pressures are similar to those at sea level on Earth, making the zone both balloon- and microbe-friendly. Most probes would measure around seven feet across and carry a scientific payload weighing a few pounds. From these lighter balloons would dangle cameras and microscopes for peering at cloud samples and looking for particles displaying funny shapes or behavior. “If it looks really irregular, scurrying along the plate, there’s a good chance it’s alive, even if it’s not based on carbon chemistry,” Lingam says.

The flotilla would also contain one larger balloon hoisting a heavier instrument known as a mass spectrometer—a machine capable of identifying complex biological molecules like proteins. While there’s no single foolproof way of detecting life, Lingam says, considering multiple lines of evidence would reduce the chance of a false alarm.

The group designed the probes using off-the-shelf technology that’s ready today. As a result, they estimate that the entire mission would cost less than $20 million. That counts as a bargain in planetary exploration, one they hope might attract an individual or private organization with deep pockets.

While work has not yet been peer reviewed, Dyar, who was not involved with the publication, says that she doesn’t see any deal-breakers. “It’s great,” she says. “It sounds like science fiction, but it’s entirely realistic.”

Dyar cautions that the alien hunters shouldn’t get their hopes too high though, pointing to a recent calculation suggesting that volcanoes could spout precursor molecules that then form phosphine in the atmosphere, rather than microbes. Nevertheless, for planetary scientists, any Venus probe is a good start.

“If we get one mission there, Venus will beguile the world and more will follow,” Dyar says.