The stellar odd couple is a rare find. 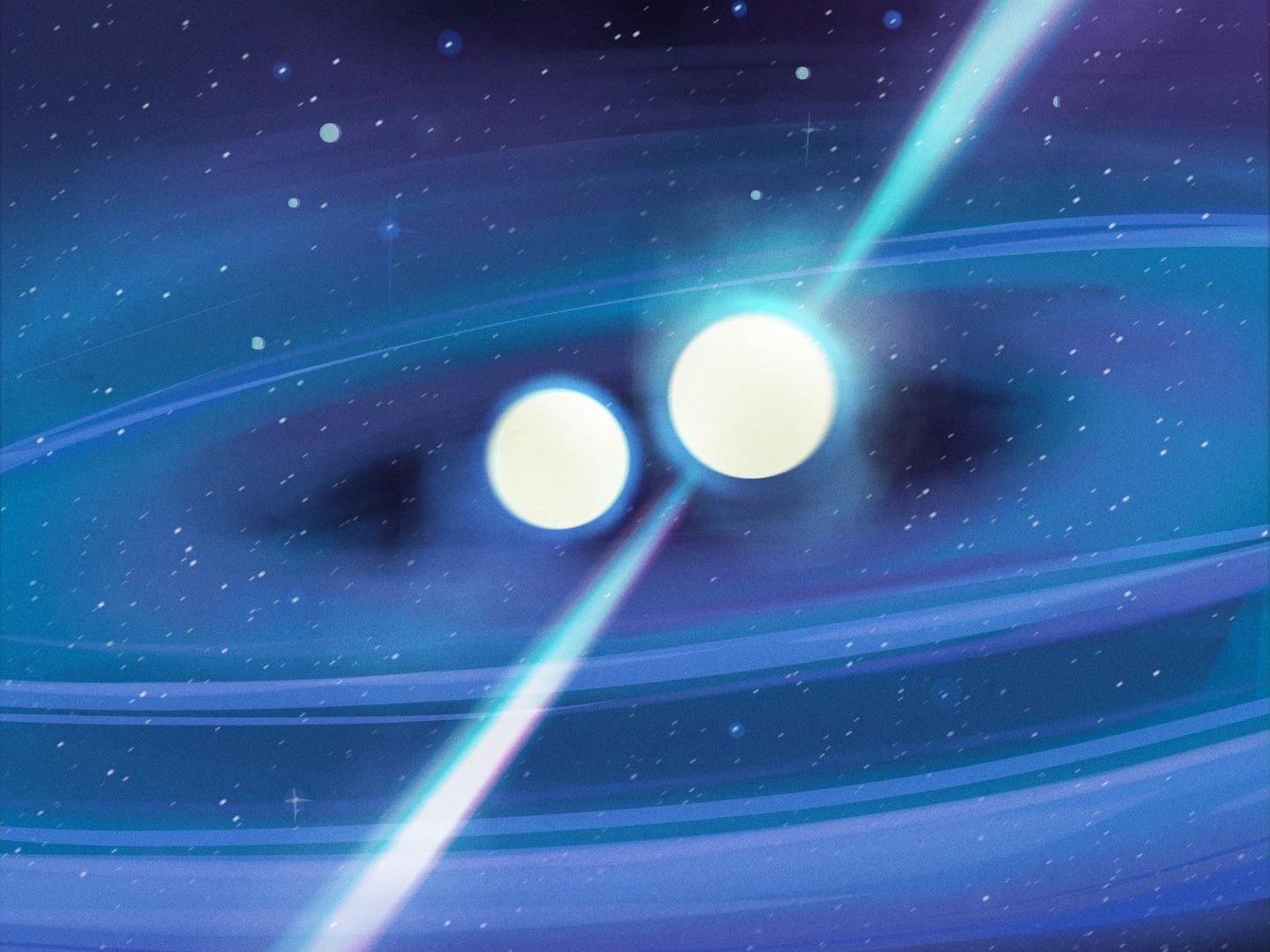 Two dead stars, one larger than the other, will one day collide—and tell us valuable things about the universe. Courtesy of Arecibo Observatory/University of Central Florida - William Gonzalez and Andy Torres.
SHARE

Picture a pair of collapsed stars, light-years away, locked in a “dance” of death: a final embrace that will end in their collision. In about 500 million years, astronomers anticipate this exact scenario will play out in a system known as PSR J1913+1102. Two neutron stars will crash together, sending a shudder through the universe: the fabric of space and time will ripple in the form of gravitational waves.

Most binary systems include two comparably sized neutron stars locked in a fiercely tight orbit. But PSR J1913+1102 contains a pair of mismatched neutron stars — one of them a pulsar — with masses that are 1.62 and 1.27 times the mass of the Sun. That makes it “the most asymmetric merging system reported so far,” according to a study published Wednesday in the journal Nature detailing the system and its impending collision.

This rare, lopsided star system offers a unique opportunity to solve some of the universe’s most elusive mysteries, like how fast the universe is flying apart.

All other double neutron star systems we’ve found that are set to merge have all had stars of almost exactly equal mass, says Collin Capano, a researcher at the Max Planck Institute for Gravitational Physics who was not involved in the study. “This [new] observation is going to force us to rethink some of the assumptions we’ve made about how neutron-star binaries are formed, while also raising new questions for us to answer.”

Neutron stars are the ultra-dense smashed up remnants of long-ago supernova explosions. A pulsating neutron star is named, appropriately, a pulsar. These stars spew out visible cosmic fireworks as they rotate — like the beam of a lighthouse — that are ultimately detected as pulses of light by radio telescopes back on Earth.

By recording the precise timing of the pulses, researchers like Robert Ferdman, a physicist at the University of East Anglia and lead author of the study, can even predict future pulses.  “By doing that, we can actually keep track of the rotations of the neutron star which can help us use them as “clocks” in order to determine various things — like [star] masses,” Ferdman says.

An international group of scientists, led by the University of East Anglia in the United Kingdom,  relied on data collected by the Arecibo Observatory in Puerto Rico as part of a large-scale survey of the galactic plane. The new study estimates that other stellar odd couples like PSR J1913+1102 are out there; more than 1 out of every 10 of the total population of neutron star mergers is asymmetric.

This finding can help us better understand past astronomical events, too. Back on August 17, 2017, we saw a watershed moment in the history of astronomy. Researchers throughout the world witnessed the cataclysmic crash of two ultra-dense neutron stars some 130 million light-years away using Advanced Laser Interferometer Gravitational-Wave Observatory (LIGO) and Virgo, its Italian sister detector. Known as GW170817, the spectacular event wasn’t surprising, but the enormous amount of matter the collision released — around five times higher than expected — remained a mystery.

While the two merging objects weigh together about 2.8 times that of the Sun, the individual masses of the two neutron stars are not known. GW170817 can be explained with other scenarios, but researchers say it’s possible the unexpected ejected material was due to a merger of objects with very different masses, like the pair in this week’s Nature study. “When the gravitational effects of the more massive star rips apart the less massive one, it will cause lots more stuff to be thrown out into space,” Ferdman says.

Vicky Kalogera, an astrophysicist in the LIGO Scientific Collaboration who was not involved in this study, says the result is very exciting. Not only does the discovery “beautifully” fit with the spectacular GW170817 event, she adds, but it’s a relief that other asymmetric systems like PSR J1913+1102 are out there.

Detecting these kinds of binary systems can also help determine how fast the fabric of the universe is expanding — a much-contested number called the Hubble constant.

Pinning this number down tells us a great deal about the origin, age, evolution, and ultimately the fate of the cosmos. And yet, the two most precise ways of measuring it — looking at the light from nearby flashing stars and the oldest observable light in the universe — are at odds with each other, with a curious 8 percent discrepancy. A third independent method of calculating the Hubble constant could help bridge that divide, and Ferdman and his colleagues hope that asymmetric mergers may be key. “It could help break the deadlock,” he adds.

Neutron star collisions are also the ultimate cosmic alchemist, cooking up the heaviest elements in the universe like gold. Though astronomers and physicists have marveled at these stellar corpses for decades, the innards of neutron stars are not completely understood. Massive collisions of neutron stars, especially asymmetric ones, may allow scientists to gain important clues about the exotic matter that makes up the interiors of these extreme, dense objects.

Hard answers for all these cosmic queries will come only with more detections. In the meantime, Ferdman and his colleagues hope to use PSR J1913+1102 as a far-flung laboratory to test our understanding of gravity.