A new government report cites decades-long declines of greater sage-grouse and offers a framework to save the species. 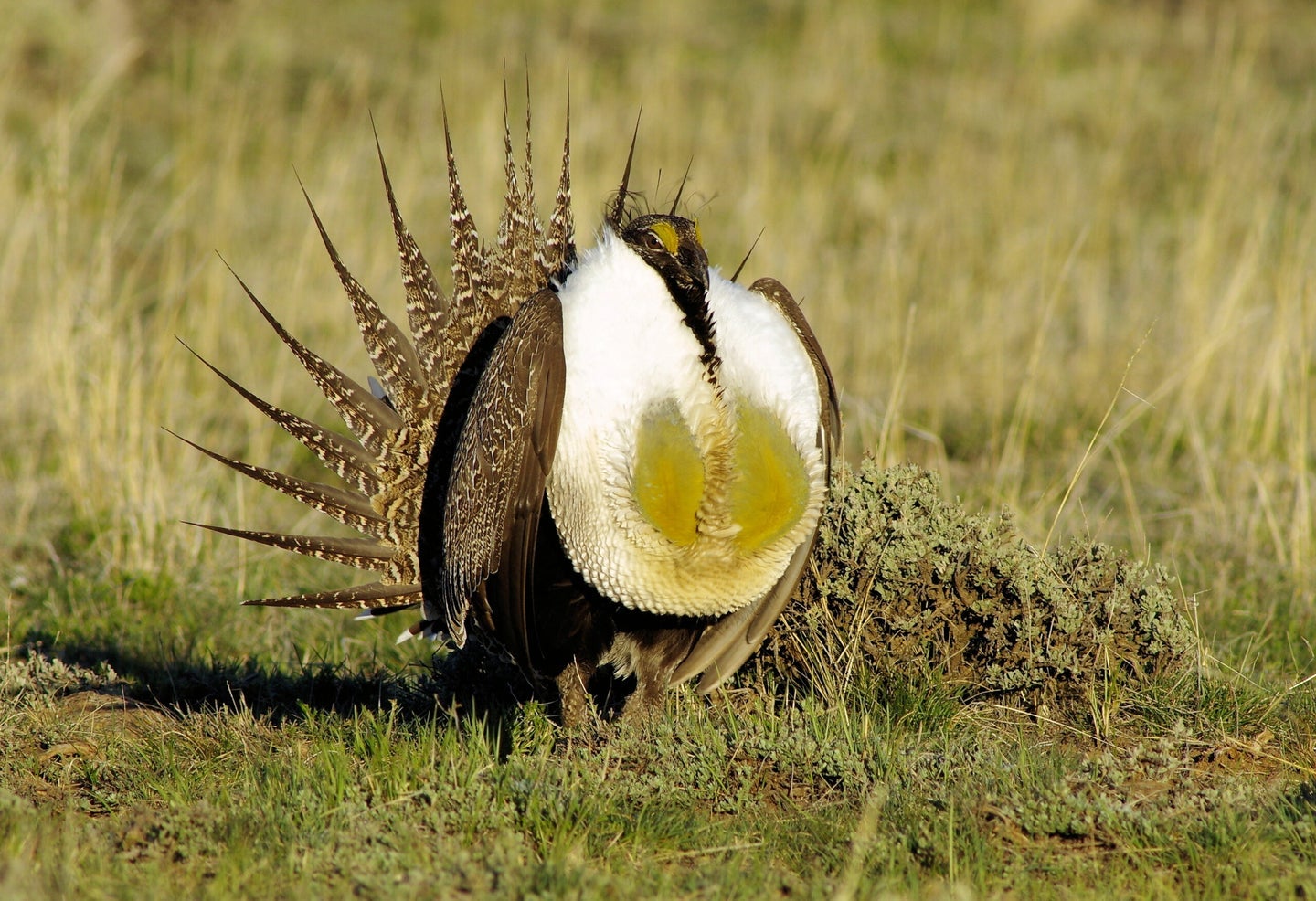 After a push by many conservation groups, the greater sage-grouse was denied protections under the Endangered Species Act. Stephen Torbit/USFWS
SHARE

Each March, greater sage-grouse gather together at lek sites on their breeding grounds across the Great Basin. In groups of up to 50, the males strut their stuff in an ancient ritual display of stamina. Their tail feathers spike and fan out as they gulp in air, puffing up their white chest plumage and filling two yolk-like air sacs that rise with the inhale before their bodies drop and heads thrust forward with the exhale. The air sacs create a wup sound that can be heard two miles away, attracting females that spend up to three weeks selecting the male that shows it has what it takes.

But this ancient mating dance so familiar to hunters and outdoor enthusiasts may not last.

A new report by the U.S. Geological Survey (USGS) shows that this once-abundant game bird has declined 80 percent in the last six decades and nearly 40 percent since 2002. Climate change and human-caused habitat loss are the main driving factors behind the population decline. If trends aren’t reversed, scientists predict, up to 50 percent of sage-grouse leks could be gone in two decades. And in 56 years, 78 percent of leks could be functionally extinct with less than two breeding males at each lek.

Greater sage-grouse are an indicator species representing the health of the sagebrush ecosystem: As one declines, so will the other.

“The fact that we even considered listing sage-grouse under the Endangered Species Act should be a concern to every sportsman and the entire public,” says Ed Arnett, Chief Scientist for Theodore Roosevelt Conservation Partnership, who is familiar with the report. “It means ecosystems are in trouble.”

This 326-page report is the most comprehensive collaborative study on greater sage-grouse populations ever done between state agencies and the federal government. The unprecedented level of collaboration between USGS scientists and colleagues created a framework to estimate population trends in the 11 western states of California, Colorado, Idaho, Montana, Nevada, North Dakota, Oregon, South Dakota, Utah, Washington, and Wyoming.

The report sets up a solution-based framework for state and federal land managers to look at range-wide trends and decide which tools to use to reverse trends. Resource managers can use this framework to evaluate site-specific conservation efforts and examine what’s behind disappearing habitats.

“It’s important they consider intact habitat and population health not only for greater sage-grouse, but other species dependent on sagebrush, like mule deer, elk, pronghorn, and the over 350 species sharing that habitat,” says John Gale, Conservation Director of Backcountry Hunters and Anglers.

The report’s findings indicate greater sage-grouse populations are declining more rapidly in the western part of the Great Basin because of drought, fire, invasive species like cheatgrass, and development. While the decline has recently been less severe in eastern areas, range-wide population numbers indicate sage-grouse populations are less than a quarter of what they were 50 years ago. Western Wyoming was the only area remaining relatively stable.

The collaborative study included USGS, Colorado State University researchers, the Western Association of Fish and Wildlife Agencies, individual state wildlife agencies, and the Bureau of Land Management. These agencies compiled 60 years of data to create a range-wide database for greater sage-grouse breeding grounds to study population trends in different parts of the species’ range. Through this study, scientists learned sage-grouse populations fluctuate between highs and lows every 9.4 years because of precipitation patterns.

Researchers also developed a “Targeted Annual Warning System” to alert land managers when local populations begin to decline, with the goal of spurring action sooner rather than later.

“The Targeted Annual Warning System provides a tool for biologists and managers to respond more nimbly,” says Peter Coates, USGS scientist and lead author of the report. “It will help determine where conservation action may yield desired results for sage-grouse conservation.”

Procuring robust federal funding to implement restoration takes time, but action is needed immediately to improve habitat. The new warning system described in the report helps states and feds to decide what conservation actions—like habitat restoration or limiting hunting permits—need to be done, where, when, and how long.

“Our concern is not physical access, but the alarming fact that sage-grouse populations continue on a downward trend despite the conservation plans released in 2015,” Gale says. “Restoring habitat is urgent.”

Hopefully, through collaborative effort, it won’t be the last chance in our lifetimes to witness what’s been referred to as the most incredible mating ritual in all of North America.