Google wants to use naked mole rats to conquer death

They're ugly as sin, but they could help us live longer. 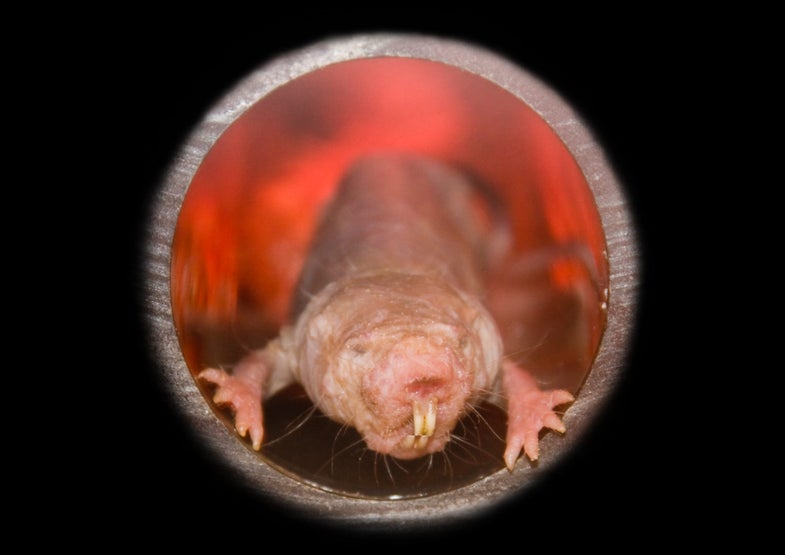 Gompertzian Law is hard to spell, but pretty easy to understand: the older a mammal is, the more likely it is to die. That’s just a fact of life—except, apparently, for naked mole rats. A new study from Calico Labs, which has the moonshot goal of unlocking the secrets of aging, found that the bald rodents’ risk of death isn’t necessarily proportionate to its age.

The creepy, hairless critter (which was famously featured as an anthropomorphic, nacho-loving side kick in the cartoon Kim Possible) has an unusually long life span, and a host of characteristics that make it seem relatively invincible. Naked mole rats don’t appear to feel pain the way most mammals do, and only a few individuals out of the hundreds studied are known to have developed cancer. They can also hold their breath for 18 minutes at a time with no apparent side effects whatsoever.

Unfortunately, this doesn’t mean naked mole rats hold the key to immortality. “I hate to burst the bubble,” says Stan Braude, a professor of practice in the biology department at Washington University in St. Louis. Braude, who works with naked mole rats but wasn’t involved in the new study, says that while the animals are likely to die off young in the wild because of predators or other natural factors, the few critters who survive that vulnerable period tend to live a long time. That’s consistent with the longevity that the Calico study found in its lab population. The overall rate of survival in the lab was obviously much higher, however, since natural factors were removed.

But the survival rate and longevity isn’t unique to naked mole rats. Braude gives the example of a tortoise or an oak tree: in the wild, both organisms can have long lifespans, but only if the seedlings or baby tortoises make it past everything that’s trying to eat them. Mice, on the other hand, only live for about three years in the wild or in the lab. It doesn’t seem to matter whether or not they’re in a safe environment; they get old, and as they get older they’re more likely to die.

So why should we care about naked mole rats, as opposed to sea tortoises or 100 year-old giant clams? And why is Alphabet, the parent company of Google, pouring money into researching the rodent at Calico?

It mostly likely has to do with the animal’s telomeres, Braude says. Telomeres are like the cap on a new pen. They protect strands of DNA from damage or decay. But telomeres themselves get damaged over the lifecycle of a cell, as it makes copies of itself. Once the telomere is gone, cells can no longer create new tissue. This highly scientific, molecular process is more commonly known as aging, and it’s something that the billionaire founders of Google (and Amazon and PayPal) would like to put an end to.

“Naked mole rats appear to be able to protect their telomeres,” says Braude. “They can have many more cell cycles, and that’s a really cool trick.” Scientists still don’t know how or why naked mole rats’ cells have this ability, but it is likely the next step in further research.

It could be a result of evolution, Braude hypothesizes. Mice, for example, are always in constant danger, so their biological priority is to reproduce quickly and copiously. That doesn’t leave a lot of room for natural selection to work its magic and select traits that would help them live longer.

Naked mole rats, on the other hand, are relatively safe in the wild once they’ve established a burrowed colony. Predators can’t easily slither into their labyrinthine underground homes, and the mole rats mostly feast on roots and tubers, meaning they hardly ever have to leave the house. The queen mole rat, much like a queen bee, is guarded by a plethora of worker rats. Evolutionarily speaking, that means traits related to longevity could be selected for over traits that allow fast reproduction. “There’s something special about mole rats,” says Braude. “But you want to make sure you get right what’s special, or you’re not going to be looking in the right places for further relevant, cool biology.”